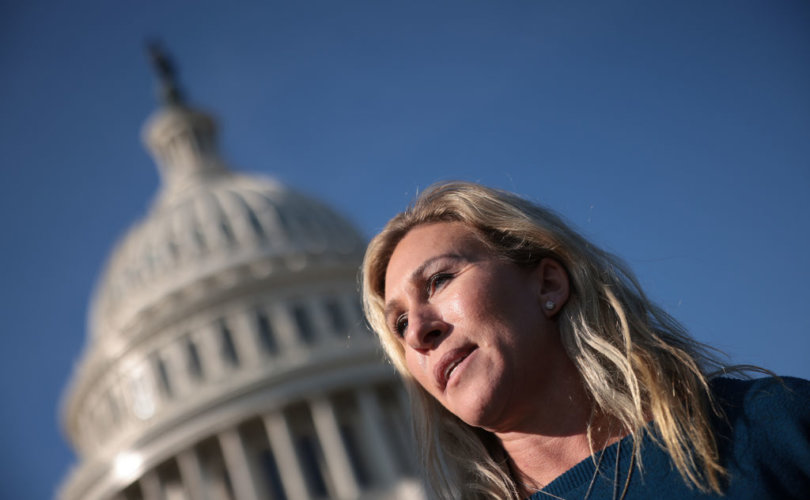 Speaking at the press conference, Greene said that the bill, which she introduced in August as the Protect Children’s Innocence Act, is about “protecting them [children] from … being fast-tracked into permanent harm to their bodies before they’re old enough to vote, get a tattoo, buy tobacco, join the military, often drive a car, and go see an R-rated movie.”

“[‘Gender-affirming care’ for minors] should never happen in the United States of America. As a matter of fact, it should never happen anywhere in the world,” Greene continued. “But there’s an ideology that is sexualizing children and pushing this among the most innocent kids, the most vulnerable, and all of our society. And it has to end.”

The bill would designate giving “gender-affirming care” to minors a class C felony offense, with penalties of 10 to 25 years in prison for doctors who provide “gender-affirming” surgeries and drugs and up to $250,000 worth of fines. If any foreign national is found to have provided such “care” before being granted a visa, the visa would be denied and the foreigner would not be allowed admittance into the United States.

The bill also allows minors to sue those responsible for any “care” they received and forbids taxpayer funded insurance plans from covering any gender “treatments” and prohibits federal employees from giving such “care.” Institutions of higher education would also be prohibited from giving lessons based around “gender-affirming care.”

The bill is currently sponsored by 42 congressmen, all Republicans, ten of whom joined Greene at the announcement last Tuesday. Other sponsors include Matt Gaetz of Florida, Vicky Hartzler of Missouri, Dan Meuser of Pennsylvania, and Clay Higgins of Louisiana. Also present at the announcement was Chloe Cole, a teen who regrets undergoing “transgender” interventions, including a double mastectomy at the age of 15.

Greene also noted in her remarks that various state laws create a need for a federal ban on “gender-affirming care” for minors, stating that Democrat-controlled states are taking away the rights of parents to protect their children from “these horrific surgeries,” The Epoch Times reported.

In late August, the California legislature passed a bill that would enable the state to become a “sanctuary” for minors seeking “gender-affirming care,” preventing minors and their parents seeking to get “transgender” surgeries or drugs from prosecution in their home states. Currently, the New York state senate is considering a similar bill.

In May, Alabama enacted a law with similar provisions to that of Greene’s proposed bill, banning “sex change” surgeries and drugs for minors as well as imposing an up to ten year prison sentence on violators of the law.

A federal judge issued a partial injunction on the law less than a week after it took effect, claiming that the state had yet to produce any credible evidence that “gender-affirming” drugs are experimental and that parents play the primary role in caring for their children. The state is currently appealing the injunction, and oral arguments are set for mid-November.

As LifeSiteNews has also noted:

Puberty blockers and cross-sex hormones are both linked to serious and potentially life-threatening side effects, including cardiovascular diseases, and neither have been approved by the FDA for gender dysphoria or studied in controlled clinical trials with gender-confused minors.

Studies show that as few as two percent of boys and 10 percent of girls with gender dysphoria experience the condition after puberty, according to the American Psychiatric Association’s Diagnostic and Statistical Manual of Mental Disorders.