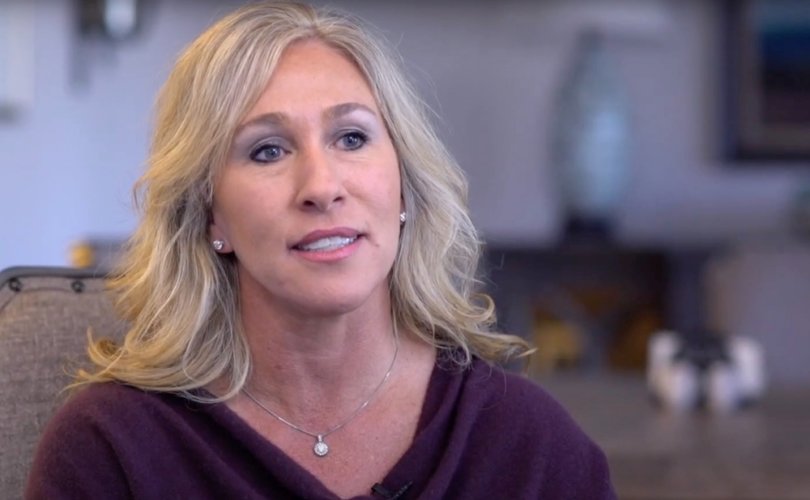 (LifeSiteNews) – Freshman Republican Rep. Marjorie Taylor Greene of Georgia should not be barred from running for reelection despite a left-wing attempt to get her removed from the ballot, an administrative judge ruled Friday.

ABC News reported that a group calling itself Free Speech For People (FSFP) attempted to argue that Greene supported the January 6, 2021 riot at the U.S. Capitol, in which a fringe of supporters of former President Donald Trump broke into the building, assaulted police, damaged property, and trespassed in congressional offices, interrupting the certification proceedings for President Joe Biden’s election. (The vast majority of the pro-Trump rally attendees that day were peaceful, and many were actually let into the Capitol building by police.)

The left-wing group claimed that Greene’s supposed support for what they called “insurrectionists” rendered her ineligible to serve in Congress under the Disqualification Clause of the Fourteenth Amendment to the U.S. Constitution, which says that “[n]o person shall be a Senator or Representative in Congress” who has “engaged in insurrection or rebellion against” the United States, “or given aid or comfort to the enemies thereof.”

Greene denied supporting violence in any way, including that she denied giving meetings, tours, or Capitol maps to protesters on January 6. Her defense also noted that she was in fact one of the many lawmakers “scared and confused” because she thought “her life was in danger” that day, according to her attorney, James Bopp.

Greene’s defense played a video she made inside the cloakroom on January 6, in which she told trespassers to “obey the law. This is not a time for violence. This is a time to support President Trump and support election integrity. God bless.”

Greene was also pressed on whether she encouraged Trump to have “martial law declared in the United States” after January 6, which she did not “recall ever discussing that.”

On April 25, CNN published a trove of alleged private text messages from former White House chief of staff Mark Meadows in which Greene allegedly told him, “In our private chat with only Members, several are saying the only way to save our Republic is for Trump to call for Marshall [sic] law. I don’t know on those things. I just wanted you to tell him. They stole this election.”

Greene’s attorneys responded that “she has no recollection of this text and, since her texts are automatically deleted after 30 days, she has no way to verify anything about it,” and argued that “[t]here is no copy of it in its original form, and no verifiable source that CNN claims to have gotten it from. As a result, there is no one to cross-examine and this is hearsay within hearsay.”

Ultimately, Judge Charles Beaudrot agreed that FSFP “failed to prove their case by a preponderance of the evidence.” While a final decision as to whether Greene’s name will remain on the ballot will be up to Georgia Secretary of State Brad Raffensperger, who says he “will release his final decision soon.”

Raffensperger was heavily criticized by Trump and conservatives for his handling of vote fraud claims in the 2020 presidential election. While some have speculated he could ultimately decide against Greene to take “revenge” on Trump’s faction on the GOP, others note that barring her from the ballot would provoke an intense backlash in his own reelection bid.