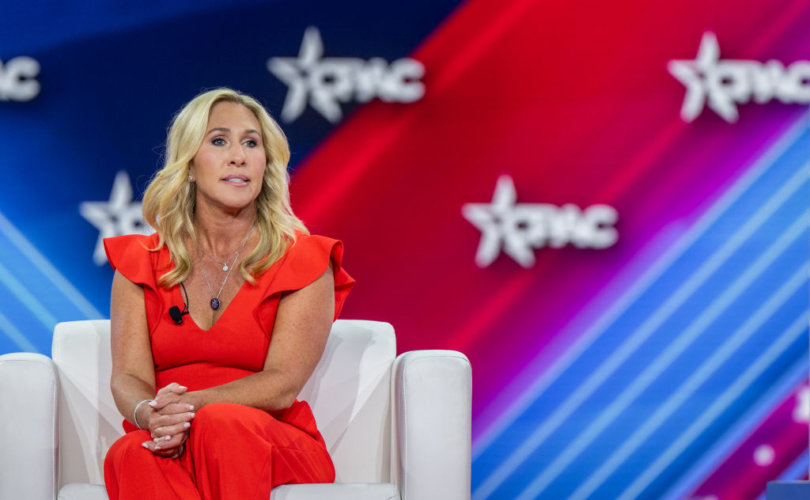 (WND News Center) – Congressional firebrand Marjorie Taylor Greene is warning Americans that, under the Democrats’ new tax-them-all scheme, a “new IRS force” of 87,000 agents will be coming after them.

“And they’re buying more guns and ammo too,” Rep. Greene (R-GA) explained in a report in the New York Post.

The new army is being created by the Democrats’ reconciliation bill already adopted by the Senate.

The Joint Committee on Taxation, a nonpartisan watchdog, says up to 90 percent of the billions in additional taxes the IRS is expected to collect will come from small businesses with incomes of less than $200,000 per year.

Greene said, on social media, “87,000 IRS agents will be hired with $80 billion taxpayer dollars when the Senate Reconciliation bill passes this weekend … Lower to middle income Americans and small businesses will be the primary targets of Democrats’ new IRS force.”

She continued, “This new version of Biden’s Build Back Better more appropriately named Bring Back Blackouts [because] of it’s insane foolish energy failing agenda will force Americans literally in the dark.”

The Democrats’ oddly named “Inflation Reduction Act,” because studies show it actually will increase inflation, is the result of Democrat pressure on Sen. Joe Manchin, a Democrat who earlier had resisted his party’s demands to spend trillions of dollars the nation doesn’t have on a Democrat wish list of “green” and other programs.

He finally caved and agreed to support this tax-and-spend program that was adopted by the Senate on a 51-50 vote over the weekend.

It is Americans for Tax Reform (ATR) that has listed the new taxes Americans will pay, including a multitude of taxes that will prove President Joe Biden was not speaking truthfully when promised not to raise taxes on anyone making less than $400,000 a year.

This tax, too, “violates President Biden’s tax pledge to any American making less than $400,000 per year.”

And there’s the $1.2 billion coal tax that “will increase household energy bills,” the ATR said.

Then there’s the 15 percent “corporate alternative minimum tax on the financial statement income of American businesses reporting $1 billion in profits for the past three years.”

The ATR said, “The cost of this tax increase will be borne by working families in the form of higher prices, fewer jobs, and lower wages. A Tax Foundation report from last December found a 15 percent book tax would reduce GDP by 0.1 percent and kill 27,000 jobs.”

The ultimate cost to consumers? $313 billion.

Also in the bullseye are retirement programs, because of a new $124 billion stock tax – which also will target union retirement plans.

And then there’s the fact that many new drugs and medical treatments may not be developed because of Biden’s 95 percent federal excise tax on American pharmaceutical manufacturers.

Mid-sized and family businesses will pay an additional $52 billion for the Democrats’ changes to passthrough businesses with declared losses.

Reprinted with permsissin from the WND News Center.