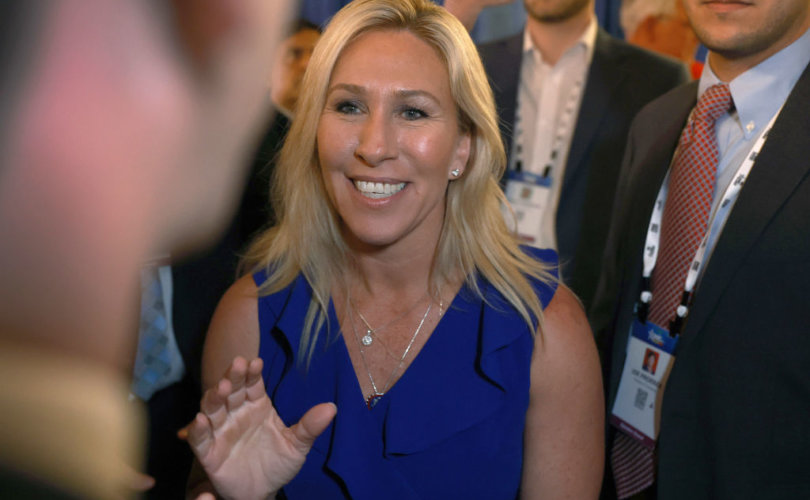 The outspoken conservative secured 70 percent of the vote against five other Republicans, with her closest contestant, Jennifer Strahan, trailing far behind at 17 percent. In a similar sign of her strong support, Greene raised over $9 million in campaign funding, while every other contender raised less than $400,000.

Opponents to the fiery conservative had tried to remove her from the ballot, arguing that she was ineligible because she supported the so-called “insurrection” of January 6, 2021. However, a Georgia judge approved her eligibility, ruling that the case had failed to prove she engaged in an insurrection.

Greene has been a strong supporter of former President Donald Trump, calling for investigation of potential voter fraud in the 2020 presidential election. She has opposed the Biden administration’s vaccine mandates, called for the securing of the southern border, and introduced articles of impeachment against President Joe Biden.

Earlier this month, Greene spoke in full support of overturning Roe v. Wade when the draft of the Supreme Court decision in the Dobbs v. Jackson case was leaked. In a May 3 tweet, she called the draft decision “the most significant and glorious news of our lifetime.”

The Supreme Court is preparing to overturn Roe—the most significant and glorious news of our lifetime. Join me in praying to God for the right outcome.

In April, Greene joined other members of Congress in calling for the investigation of the deaths of five babies killed in evident late-term abortions in Washington, D.C. “Since baby killing activists are now brazen enough to advocate for infanticide, it is right to ask if these infants were a victim of this new and bloodthirsty zeal of the deaths of innocents,” Greene said at the time, referring to California’s proposed AB2223 bill that would allow perinatal killing of a baby even after birth.

Greene has called for an end to abortion for the country to “truly heal.”  “We have to do everything we can,” she said in February, “to stand up for the unborn, because when we can end abortion, our nation will truly heal.”