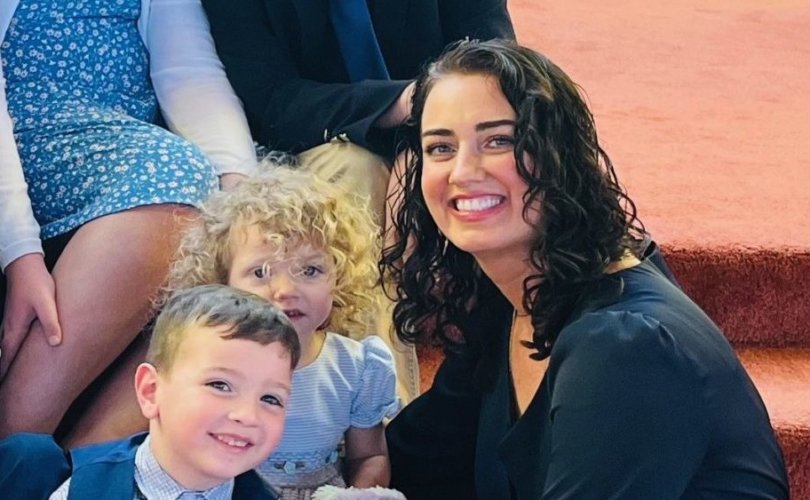 (LifeSiteNews) — The wife of pro-life sidewalk counselor Mark Houck spoke out in two short videos providing greater detail on what ensued during the FBI’s terrorizing raid on their family’s home September 23, including how the agents endangered the lives of their seven children and how they denied her husband the most basic necessities of suitable clothing for leaving his home.

In the first testimony released by a Chicago-based public relations firm, Ryan-Marie Houck reaffirmed what she told LifeSiteNews the day of the raid regarding the arrival of around 15 law enforcement vehicles at the family’s property shortly after 7 a.m. with 20 to 30 agents swarming their yard with rifles in firing position.

“They were running all around the property and getting behind cars and doors,” she said. “Once I had gone downstairs, I could see that they were around the side of my house and everything, heavily armed [with] shields, helmets, vests, and big, huge, long rifle-type guns.”

Some agents began violently pounding on the front door, demanding it be opened or they would bust it down.

Though Mark attempted to calm the agents due to the presence of his seven children, ages 13 and younger, they continued yelling. When he opened the door, “immediately, there’s guns pointed at him, a gun pointed at me on the staircase, and then another gun over our threshold kind of scanning the home. Our children were right there,” Ryan-Marie explained. “So, essentially, they had guns pointed at [the children]. It’s hard to even wrap my mind still around that thought.”

“So, it’s terrifying. The children are screaming and crying,” she described. “You just figure like one move from a four-year-old and something tragic could have happened.”

At this point, “they just immediately grab [Mark] and handcuff him,” she recalled. And after she demanded a warrant and they indicated they were taking him with or without a warrant, then later relented, Mark asked his wife to get him a sweatshirt, his rosaries, socks and appropriate undergarments.

“It was very, very cold, and Mark had just woken up. So he was just in shorts and a T-shirt, downstairs [wearing] no shoes or socks,” Ryan-Marie explained.

In a follow-up text message with LifeSiteNews, the homeschooling mother clarified that though they asked for the basic ability for Mark to put on appropriate undergarments and socks, this was not allowed by the agents. Nor was he allowed to simply put on a sweatshirt to protect him from the elements. Though, fortunately, his “garden sandals” were at the door and he was able to slip those on his bare feet before being escorted to a vehicle.

Other details are revealed such as the reactions of the Houck’s young children, including their nine-year-old daughter who was “terrified” at the gun-toting agents standing at their home’s back glass doors and she ran clinging to her mother, with other children.

Healing process ‘one day at a time,’ ‘still just a lot of nightmares and a lot of uncertainty’ with younger children, ‘can’t sleep alone’

In a second short video, Mrs. Houck explains how the aftermath of the raid has been “quite difficult” for their children and family, stating they are proceeding in the healing process “one day at a time, one moment at a time.”

While she says her husband Mark is “a man of faith” and has “always been preparing to kind of lay down his life … he didn’t want that for his children and his wife.”

The family has received some ongoing counseling for their older children, along with the assistance of “a great priest friend of ours who is gifted in that way,” but the younger children are “the ones who have struggled the most. They can’t articulate what it is that they’re feeling.”

For this reason, their four-year-old who is “normally a very peaceful boy” has been just “randomly screaming” and “couldn’t sleep without his older brother going to bed with him. So, my 13-year-old has to go to bed at like 8:30 [p.m.] because the [younger] boys can’t sleep alone.”

“So, I think there is still just a lot of nightmares and a lot of uncertainty with them,” Ryan-Marie explained.

In addition, she reflected on the morning of the raid and how easy it would have been for their four- and six-year-old boys to “have just ran under foot like they normally do, and how tragic that would have been if someone was a little trigger happy, or if Mark had gone to the door with the spatula in his hand that he was using [at the time in the kitchen] … just all of those things are really terrible to think about.”

At the same time, Ryan-Marie did say they “feel like a sense of peace is coming back into our home. We’ve had priests come and bless our children and bless our home. A woman made some scapulars for us and we had them blessed and we’re all wearing them.

“We’re just trying to reclaim what we’ve worked so hard for with our family and our home, because we felt like in an instant it was stolen from us,” she concluded.

FBI raids against Houck and others politically motivated; pro-abortion terrorism against churches and pro-life centers remains unaddressed by DOJ and FBI

Mark Houck and his family were the victims of a terrorizing FBI raid on their home late last month, a report that LifeSiteNews broke at the time and has since gone viral as a national news story.

Prosecutors allege Houck, the founder and president of The King’s Men, which promotes healing for victims of pornography addiction and promotes Christian virtues among men, violated the Freedom of Access to Clinic Entrances (FACE) Act when he allegedly pushed an abortion center employee twice in one day in October 2021.

Ryan-Marie told LifeSiteNews the abortion facility worker had been harassing their 12-year-old son by using vulgar language and getting into the boy’s “personal space,” and that Houck had shoved him away to protect his son.

“He didn’t have any injuries or anything, but he tried to sue Mark,” Ryan-Marie said at the time, adding that the case was thrown out of state court in the summer.

Yet somehow this dismissed local case drew the interest of Merrick Garland’s Department of Justice (DOJ), which has executed dozens of these SWAT-type acts of terrorism against pro-life activists, and other ideological adversaries while not a single arrest has been made in connection with approximately 100 “Jane’s Revenge” terrorist attacks against churches and pro-life centers since May.

And strangely, the Biden administration’s indictment against Houck contains details of his alleged offense that the pro-abortion complainant himself did not make in his original criminal complaint, in what appears to be an attempt to inflate the charges to justify making the case a federal matter.

Houck pleaded not guilty to these two counts on September 27 in a Philadelphia federal court, and his attorney at the time, Thomas More Society vice president and senior counsel Peter Breen, called the indictment a “political prosecution.”

“They are trying to send a message to pro-life and people of faith: ‘Don’t mess with us,’” Breen said. “They want to intimidate — they want to cause good people like Mark to stop praying and counseling at the abortion clinics of our country. And that’s not going to happen.”

For comprehensive coverage of the Mark Houck story, click here.

FBI has made no arrests in connection with Jane’s Revenge attacks on pregnancy centers, churches