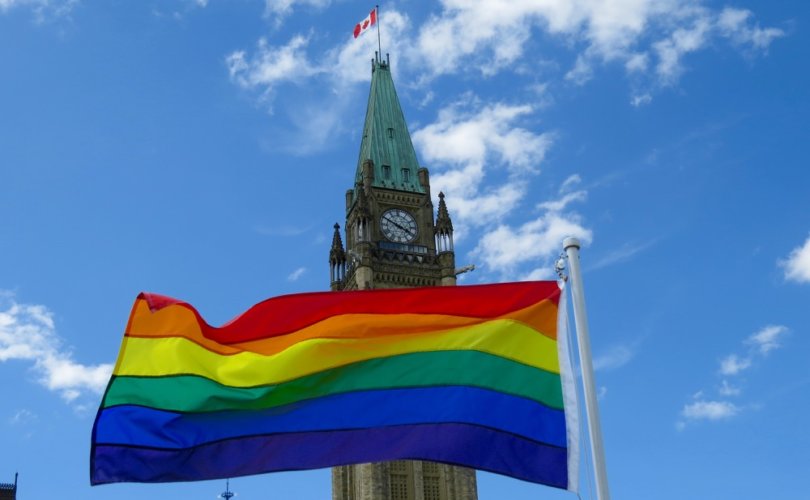 “Misgendering someone will risk you being embroiled either at a Human Rights Commission or in a Criminal Court. And this isn’t a hypothetical,” said Steyn in a June 20 interview with Carlson.

Canadians could be jailed or fined for using the incorrect gender pronoun. .@MarkSteynOnline says be prepared to go to court. pic.twitter.com/QMZ7b4I1h3

Last week, Canada passed a bill criminalizing any kind of discrimination on the grounds of “gender expression” and “gender identity.”

Critics warn that Canadians who refuse to call individuals by their preferred pronoun, including “ze, zir, hir,” will now, under the new law, be charged with hate crimes, fined, jailed, and/or compelled to undergo anti-bias training.

Steyn said the new law will only further encourage individuals who identify as transgendered to bring lawsuits against individuals and businesses whom they suspect of discriminating against them.

And it has been happening already, he said.

Steyn gave the example of a female-only fitness club owner who was sued by a biological male claiming to be a female a few years ago after the biological male said the owner was discriminated against him for refusing his membership application.

“One of the ‘trans-women’ still had what we used quaintly to regard as ‘male private parts’ – but can now be attached to anybody. And, it was felt that with these particular parts ‘she’ shouldn’t be strolling around in the communal shower,” he said.

While the case was eventually dropped, the Ontario Human Rights Tribunal judge declined to award the fitness club owner costs, leaving the owner with a $100,000 tab.

“What we are witnessing is an Orwellian assault on the most fundamental language, the language which defines the two sexes. And Canada has just put itself on the side of criminalizing that,” Steyn said.

“You sort of wonder, like, why does no one stand up and say that? I guess it’s now illegal to,” Carlson added.

Two months ago, Carlson interviewed transgender activist Caitlyn Jenner on his show. Not once did he refer to the biological male and former Olympian athlete as “she.”