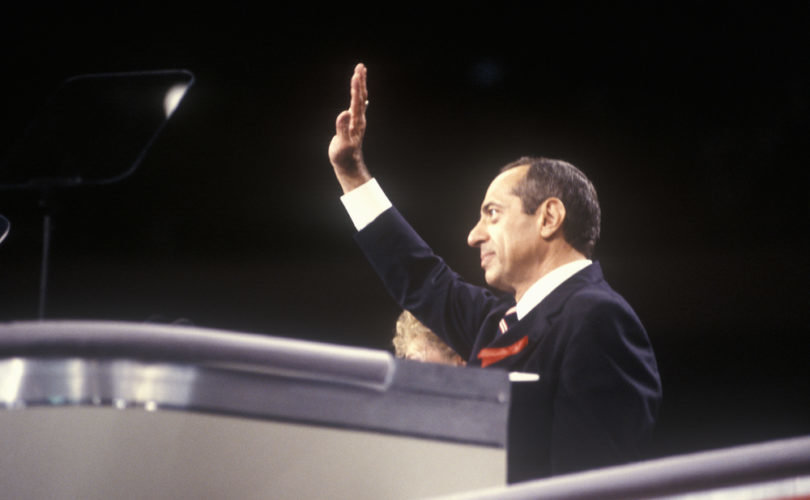 Thirty years have passed since Mario Cuomo, the governor of New York from 1983 to 1994, gave a talk to students at the University of Notre Dame on September 13, 1984, entitled “Religious Belief and Public Morality: A Catholic Governor’s Perspective.” The well-known speech was a summation of Cuomo’s attempts to rationalize his Catholic faith while maintaining a pro-abortion rights political platform.

Cuomo’s talk came at a controversial time in the midst of a well-publicized public argument with Archbishop John O’Connor of New York, who served as archbishop from 1984 to 2000. Archbishop O’Connor objected to Cuomo’s assertion that his adherence to the Catholic faith was not jeopardized by his support of abortion.

Cuomo stated in his speech at Notre Dame that legal interdicting of all abortions was “not a plausible possibility” and it “would be ‘Prohibition’ revisited, legislating what couldn’t been forced… [and] creating a disrespect for law in general.” He also stated:

Catholics, the statistics show, support the right to abortion in equal proportion to the rest of the population. Despite the teaching in our homes and schools and pulpits, despite the sermons and pleadings of parents and priests and prelates, despite all the effort at defining our opposition to the sin of abortion, collectively we Catholics apparently believe — and perhaps act — little differently from those who don't share our commitment.

According to Human Life Review, Monsignor William Smith, dean of St. Joseph’s Seminary in Yonkers, N.Y., at the time of the speech, reportedly said:

The governor’s style was smooth and slick, but the content was specious and misleading. He is obviously a competent man, but a couple of points were horrendous, one being the complete ignoring of the human rights issue. Human rights do not rest on consensus… This is why we call them inalienable rights. He relied on the 15-year old rhetoric of Planned Parenthood [that] [the Church is] trying to impose our morality on others.

Terry Hall of Crisis Magazine commented that Cuomo’s speech was “perhaps the most detailed and thorough attempt by a major Catholic office holder to set forth a reasoned ‘pro-choice’ position on the abortion issue.” Ultimately Hall noted that Cuomo’s speech “furnishe[d] a compendium of ways in which even a sustained, sophisticated defense of the pro-choice position fails.”

The historian Richard Brookhiser reportedly noted that Cuomo presented “a way of having religion when he wanted it [and] not having it when he didn’t.”