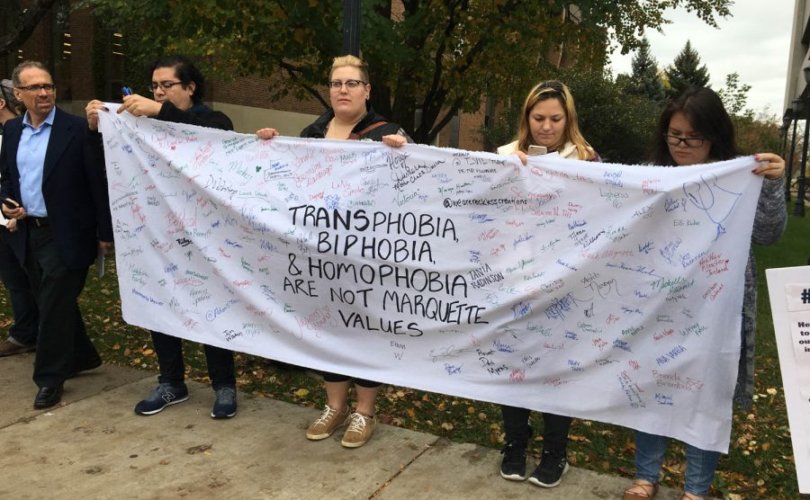 The protesters, from the American TFP’s Student Action, who were on a tour of Wisconsin, held a 14-foot banner with the quote “God made them male and female” from Genesis 5:2. The scripture quote was followed by, “Stop the ravages of transgender ideology.”

Marquette introduced gender-neutral restrooms to accommodate “transgender” students last year. Signage was replaced, and instead of bathrooms being labeled “Men” and “Women,” they became “Bathroom A” or “B,” and “Bathroom 1” or “2.”

The TFP Student Action demonstration included flyers with information on how transgenderism is dangerous to the family, triggering some hostility and at least one faculty member who attempted to block their message.

A counter-protest by students was joined by the university provost, who said the TFP Student Action demonstration consisted of “messages of discrimination” that do not reflect “who” Marquette is.

“Messages of discrimination are completely out of alignment with who we are,” Dan Myers blogged.

Myers also demeaned the TFP Student Action demonstrators and presumed to speak for their intent, terming them “this small group” who “arrived at Marquette University with one goal in mind  —  to show their disdain for our LGBTQ community, particularly its transgender members.”

He joined the counter-protest by students, lending his signature to their banner that stated, “Transphobia, biphobia & homophobia are not Marquette values,” something he glowingly described in his blog, concluding, “I can’t express how proud I was to see our community rally together.”

Myers was not the only Marquette administrator to show disdain for TFP Student Action’s message, with Office of Institutional Diversity and Inclusion Executive Director Dr. William Welburn telling the student news service Marquette Wire, “If you’re going to come to our university, you should respect our position on human dignity and what we teach our students.”

Myers had embedded his tweet in the blog post, “All MU members are welcome, any skin color, sexuality or religion. No outside protest changes that,” linking to the Marquette University Diversity Statement. He also included a tweet from Marquette Vice President of Student Affairs Dr. Xavier Cole on the matter in his blog post. Cole also linked to the diversity statement, saying, “I support this statement as well as diversity and inclusion at Marquette.”

Marquette University did not respond to LifeSiteNews’ inquiry into how the message constituted discrimination or disrespects the university’s position on human dignity, the specifics of Marquette’s position on gender fluidity, and whether the scripture quote conflicts with any Marquette policies.

The Louis Joliet Society alumni group issued a press release on Friday morning, the title stating Catholic teaching is a message of discrimination according to Marquette’s provost, denouncing the Welburn and Myers statements.

“We counter that if you are going to administrate our Catholic university, you should respect the Catholic Church's position on human dignity, particularly regarding the issue of “gender theory,” the group’s statement said in response, linking to the U.S. Conference of Catholic Bishops' teaching resources on Gender Theory/Gender Ideology, saying, “Here’s a good place to start.”

“TFP does not travel around the country to 'show their disdain for our LGBTQ community, particularly its transgender members' nor to deliver a 'message of discrimination' but to advocate for the truth of Catholic teaching in a culture that has clearly lost its way,” their statement said. “This is a work of mercy (linking to the USCCB Spiritual Works of Mercy webpage), something all Catholics are commanded by God to do.”

The Joliet Society said Catholic university administrators should have awareness of this and added that it was “intellectually dishonest and lazy” to write the American TFP message off as bigotry.

“As always, our greatest concern is for the students at Marquette — ALL of them,” the Louis Joliet alumni group statement said. “Dr. Welburn insists that TFP and the rest of us ‘should respect … what we teach our students.’ Very well, doctor. What DO you teach them?”

The purpose of the visit was to promote Catholic moral values, TFP Student Action Director John Ritchie told LifeSiteNews, and share with students the educational flyer titled “10 Reasons Why Transgenderism Is the Family's Worst Enemy.”

Public streets run through Marquette's campus, he said, so no permit was required for the demonstration and the public sidewalk offered a perfect location to meet students with the pro-family information that might not be otherwise available to them in liberal academia.

The demonstration was part of a pro-family tour through Wisconsin, according to Ritchie, who described how the Marquette community received the group.

“During our rally at Marquette, we saw how the homosexual agenda is promoted openly while authentic Catholic teaching is silenced and even mocked,” he said. “Moral values are excluded. Basic biology is ignored. And reason and reality are replaced with fantasy and feeling.”

There were 15 TFP Student Action volunteers who took part at the rally at Marquette, lasting about two hours, he said. Three volunteers played bagpipes while the others distributed the leaflet.

“We peacefully discussed the dangers of transgender ideology as well as the need to uphold the natural distinctions between male and female, the way God created them,” Ritchie recounted. “This simple message enraged those on campus who support the homosexual movement.”

A counter-protest organized quickly, he explained.

“Dozens of pro-homosexual activists arrived with pre-made signs that read, ‘Trans Lives Matter,’ ‘MU supports the trans community,’ and ‘Marquette stands against transphobia,’ among others,” Ritchie stated. “They lined up on the opposite side of the street and chanted, ‘We are Marquette.’”

Ritchie said a faculty member who claimed to be an expert in transgender studies was more vocal than most, standing in front of their banner, covering the word “God” with his own pro-transgender sign.

“For all the lip service paid to inclusion, he was determined to exclude God's name,” Ritchie recalled. “But TFP volunteers soon resolved the issue by hoisting our banner even higher, making the word “God” visible once again.”

“Several pro-transgender students tore up our literature,” Ritchie told LifeSiteNews, “and instead of acting in a civil manner, resorted to name-calling, cursing and even verbal attacks against God.”

The reaction, and Myers’ statement, ignores the real issue addressed in the TFP flyer, he said.

“According to the American College of Pediatricians, transgenderism constitutes a form of child abuse,” Ritchie continued. “Transgenderism is self-destructive and contradicts biology and science. But the provost did not address the merits of the arguments presented. He conveniently called them ‘discrimination.’”

This exchange of Catholic teaching for diversity is putting young Catholics’ souls at grave risk, he said.

“This unilateral focus on diversity and inclusion is misleading a generation of young Catholics into spiritual ruin,” Ritchie told LifeSiteNews. “We are told that diversity is dogma and every moral aberration that falls under the LGBTQ acronym should be accepted.”

“We have a moral obligation to resist the lies of the sexual revolution and proclaim the unchanging truth — God made them male and female,” he said. “And no liberal professor can change what God established from the beginning.”

A week before Marquette administrators criticized the America TFP demonstration, an approved student pro-life display on campus was vandalized by pro-abortion students, who promptly bragged about their actions on social media and received praise from other student groups.

Marquette also suspended a tenured professor earlier this year for exposing in a blog post that a student was harassed by a graduate assistant because the student did not support homosexual “marriage.” Professor John McAdams had also expressed concern a few years earlier about the university’s rendition of “social justice.”