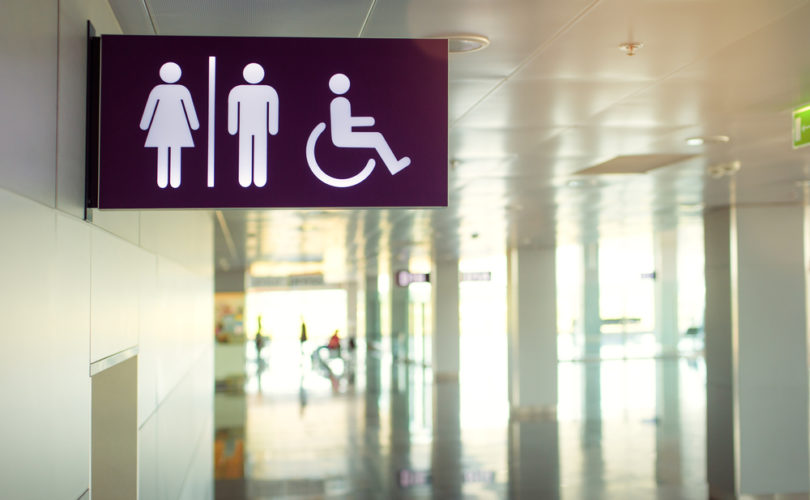 December 11, 2015 (CardinalNewmanSociety) – Marquette University in Milwaukee is currently in the process of implementing gender-neutral restrooms on the ground floor of residence buildings to accommodate individuals who consider themselves transgender, a move which has prompted a Marquette Catholic renewal alumni group to question the University’s devotion to maintaining its Catholic identity.

“Marquette has, once again, decided to mock the faith upon which it was founded,” the Louis Joliet Society, an alumni group dedicated to restoring and preserving Marquette’s Catholic identity, said in a statement on its website.

“The Church and Pope Francis have repeatedly decried gender ideology as destructive to souls, yet here we have a Catholic university pandering to that ideology,” Mary Jarvis, a member of the Louis Joliet Society, said in an interview with The Cardinal Newman Society.

The Cardinal Newman Society reached out to Marquette University’s communications team to inquire about the potential conflict between supporting gender theory and Marquette’s Catholic identity.

“We are installing gender-neutral signage outside some restrooms in university-owned residence buildings to better serve the needs of all our students, which includes transgender students,” responded Chris Jenkins, associate director of university communication. “The change in signage applies to single-person restrooms that require a key for entry. Many other Catholic and Jesuit universities have adopted, or plan to adopt, similar policies.”

According to Marquette Wire, students will find the gender-neutral signage permanently replacing the male and female signs on restrooms after the University’s winter break.

The restrooms require access keys that “will be labeled ‘Bathroom 1, Bathroom 2, Bathroom A or Bathroom B,’ instead of ‘Men or Women,’” Marquette Wire reported.

But the Louis Joliet Society lamented Marquette’s decision to join this trend. “How exactly does this initiative square with Marquette’s claims of being ‘Catholic?’” they asked on their website. Gender ideology is “destructive to souls and directly opposed to Catholic teaching,” the report continued, citing excerpts from the Catechism of the Catholic Church. “WHY do institutions of Catholic higher education advocate for such an ideology?”

Indeed, Pope Francis has warned against the dangers of gender ideology multiple times and has classified it as one of the “serious social problems besetting” the family, according to Catholic Herald.

“The complementarity of man and woman — the summit of divine creation — is being questioned by what is called ‘gender ideology’ in the name of a society that is freer and more just,” Pope Francis reportedly stated at a meeting with the bishops in Puerto Rico. Male and female differences “are not of the order of opposition or subordination, but rather of communication and generation” and both are made in the image and likeness of God, the Holy Father continued.

Marquette Wire reported that the University’s executive director of housing and residence life, Mary Janz, said that the move was made to “recognize all Marquette students and their guests with this decision.” Janz reportedly “noted how gender-neutral bathrooms are a discussion topic across the university and country because more transgender persons are advocating for their rights.”

“We want all students to feel like they belong,” Janz told Marquette Wire and cited a recent conference titled “Dignity, Resiliency, Solidarity: A Trans*Pectrum Conference” which was hosted by Marquette’s Center for Gender and Sexualities Studies in November.

The conference took place on campus at the University’s alumni memorial union ballroom and was held for “all Queer, Trans and Gender non-conforming Milwaukee and Midwest community members.” A transgender activist duo titled DarkMatter was featured at the end of the conference.

Jarvis told the Newman Society that these actions from Marquette are “not about ‘justice’ or ‘Jesuit values.’ It’s about selling out to secular mores and lawsuit prevention, i.e. cowardice.”