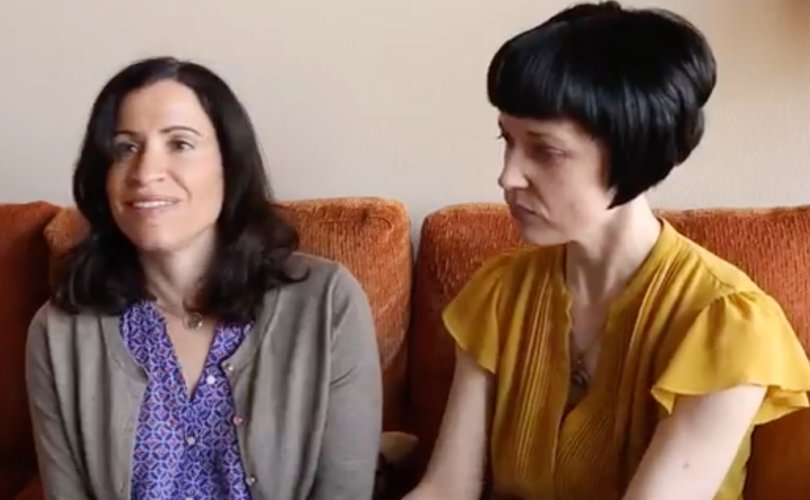 FORT WORTH, Texas, March 5, 2018 (LifeSiteNews) – Catholic Charities of Fort Worth, Texas, turned down two “married” lesbians for foster parenting because their homosexual lifestyle gave children no father. The lesbians are now suing Catholic hierarchs and the federal government for discrimination.

Fatma Marouf and Bryn Esplin filed a lawsuit February 20 in U.S. District Court for (District of Columbia) against the U.S. Conference of Catholic Bishops and the Trump administration for being turned down by the Christian adoption agency to foster a refugee child.

Texas A&M University instructors Marouf and Esplin are “married” to each other, which violates the Bible-based criteria Catholic Charities of Fort Worth goes by in placing children. The criteria are set by the bishops of the Catholic Church.

“This mission is entrusted to the Church by Christ,” Fort Worth Bishop Michael Olson said.  “It would be tragic if Catholic Charities were not able to provide this help in accordance with the Gospel values and family assistance that is so essential to these children who are vulnerable to being mistreated as meaningless in society.”

The U.S. Conference of Catholic Bishops receives federal money for refugee resettlement and oversees Catholic Charities of Fort Worth’s international foster care program, which is the only placement agency for unaccompanied refugee children in Texas.

The program “is faithful to the Church’s mission to care for the poor and vulnerable,” Bishop Olson said, and is fully compliant with federal regulations, according to the Texas Catholic Conference of Bishops and the Fort Worth Diocese.

Specific defendants named in the lawsuit include the Department of Health and Human Services and Secretary Alex Azar, the Administration for Children and Families and Asst. Secretary Steven Wagner, and the Office of Refugee Resettlement and Director Scott Lloyd.  They are accused of violating the Establishment Clause, the Equal Protection Clause, and the Due Process Clause of the U.S. Constitution by imposing a religious litmus test in child placement.

“Allowing (them) to turn away our clients is like our government endorsing one set of religious beliefs over another, which is unconstitutional,” pro-homosexual Lambda Legal attorney Jamie Glicksberg, who filed the complaint on behalf of the lesbians, said.

Marouf, a Muslim, and Esplin, a Mormon, also accuse Catholic Charities of Fort Worth’s Chairman of the Board Executive Committee, Donna Springer, of “insulting” and hurting their feelings by saying only heterosexual married couples who “mirror the Holy Family” qualify.  Springer and Catholic Charities deny the conversation, but admit their director of child welfare talked with the lesbians on the phone.

Last year, Texas passed the Freedom to Serve Children Act, which protects state-funded Christian adoption and foster care agencies from government punishment if they give preference to married, one man and one woman households.  The Act took effect last September.

Texas’ new law also stops the government “from discriminating…against a child welfare services provider” if the provider refuses to facilitate an abortion or the distribution of contraceptives, offers a Christian education to a child such as placement in a Catholic school, or refuses to betray “sincerely held religious beliefs.”

Lambda Legal says the state’s religious freedom law doesn’t apply to Marouf and Esplin’s case, because refugees are under the federal government’s care.

“While our case does not challenge the state [law], it…demonstrates clearly the danger of such laws — harm to children as result of fewer homes available to them and harm to the loving families turned away,” Cook claimed.