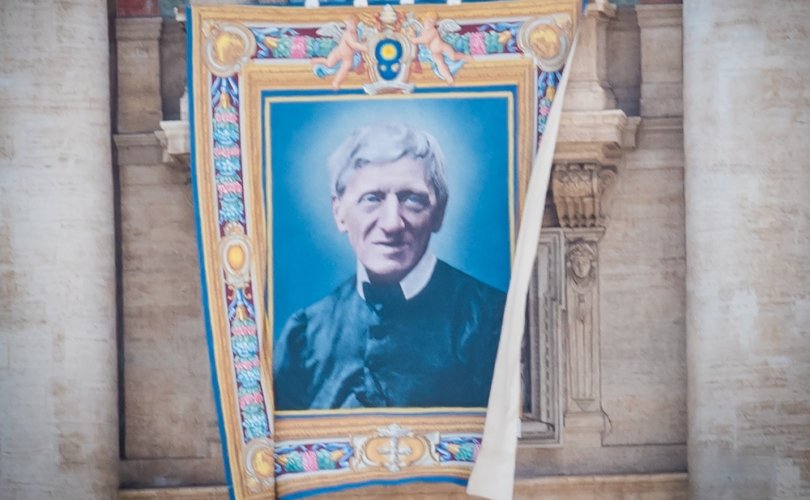 Cardinal John Henry Newman's image hangs on the facade of St. Peter's Basilica as the Church prepares for his canonization on October 13, 2019.Jim Hale / LifeSiteNews

VATICAN CITY, October 12, 2019 (LifeSiteNews) ― Blessed John Henry Cardinal Newman would not have understood the reasons behind the contemporary push for married priests.

Fr. Ignatius Harrison of Newman’s own Birmingham Oratory is the Actor, that is, the petitioner, for the Cause of the great English cardinal’s canonization. Newman, a leading English religious and literary figure in his lifetime, will be raised to the altars this Sunday.

Even before he became a Roman Catholic, the Anglican John Henry Newman was a firm proponent of clerical celibacy. Fr. Harrison indicated to LifeSiteNews that the beatus would be the same today.

“To be perfectly frank, I don’t think [Newman] would understand the reasons [for married priests],” Harrison said.

The Provost of the Birmingham Oratory observed that Newman had friends among married Anglican clergy and that he counted married men and women among his Catholic friends.

“But for Newman himself, the 100% commitment to serving Christ, which he saw as the essence of the priesthood: he didn’t understand how that would be compatible with having a family,” Harrison explained.

“I don’t mean for any moral reasons but, apart from anything else, the practical reasons,” he continued.

“For as St. Paul says, a married man is concerned with his wife and children―quite rightly―whereas the unmarried man can devote himself exclusively to the Lord.”

Meanwhile, Newman’s chaste celibacy was related to his total devotion to the Lord on an emotional and spiritual level.

“He wanted to live for the Lord alone, completely.”

Remarking that this might be an unpopular opinion, Harrison linked chaste priestly celibacy to the Eucharist.

“I would say that this is something that we have to learn and to remember nowadays: there is a deep connection between chastity and celibacy for the clergy and their relationship with the Blessed Sacrament.”

If the modern world remembers nothing else about Cardinal Newman, it remembers that when asked to drink a toast to the pope, he replied that he would drink “to conscience first, and to the Pope afterwards.”

Harrison underscored that Newman made it clear subsequently that he didn’t see the doctrine of the Church and the conscience as contradicting each other. Indeed, the conscience is an important part of remaining in the truth of God.

“Conscience is a human faculty of judgement but it exists because our Maker has written His law on our hearts, and if our conscience is correctly formed―it has to be educated and formed―and nourished by the spiritual life―it provides a very certain and explicit link with the Almighty,” the Oratorian said.

Harrison said that we live in times when the objective difference between right and wrong is being obscured and that dogmatic truths are not simply what we make them.

“Truth and the spiritual life go together,” he said.

Newman was attracted to Catholicism because of ecclesiastical authority, but this was rooted in the truth of faith. Regarding the concept of collegiality, Harrison said that Newman would be interested in it, but not if it involved a democratic vote on truth.

Harrison said that, regarding the influence of his theology, Newman’s time has come.

“It seems to me that God gives his people the saints they need when they need them in many cases, and I think Newman of one of those,” he said.

“Newman has been in the background, really, for the last 130 years, since he died, and I believe his time has come.”

Harrison’s three principal reasons for saying this are Newman’s teaching on the conscience being part of our spiritual life, his desire for a “well-informed and articulate laity”, and his discernment of “the true development of doctrine.”

“It I had to back one of those three above all the others, I suppose it would be that [the true development of doctrine] although they do go together,” the Oratory priest said.

Newman formulated criteria to discern “what is a true development and what is a novelty,” Harrison explained.

“A picture emerges quite clearly, and if Newman were in the Church Militant right now, he would insist on the coherence of whatever is being taught nowadays with the Church’s living tradition,” he concluded.