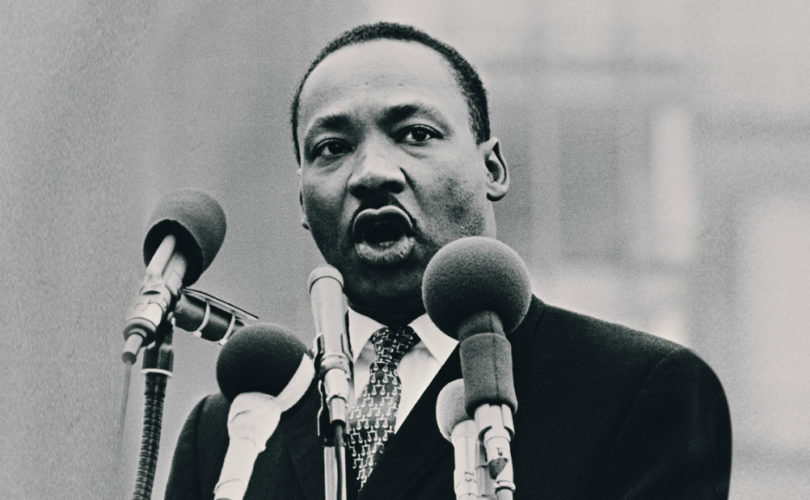 January 25, 2019 (Society for Protection of Unborn Children) – On Monday, America celebrated a federal holiday in honour of Martin Luther King Jr, the famous civil rights activist. While most people used the day to celebrate his legacy of nonviolent activism against racial discrimination, Planned Parenthood decided to co-opt him to promote abortion.

The Planned Parenthood Action Twitter account, the activist arm of America's largest abortion provider, posted a number of times about Martin Luther King Jr day, but the most noticeable was when it claimed that the “fight for racial justice, economic equity, & reproductive freedom are undeniably intertwined.”

We honor Dr. Martin Luther King Jr.'s life & legacy as the fight for racial justice, economic equity, & reproductive freedom are undeniably intertwined. This fight is one we cannot do alone, & we are proud to stand w/ our partners who are on the frontlines of this fight. #MLKDay pic.twitter.com/X2f7Cnq8oe

“20th century skin color race card inflammation will not solve crimes against humanity; including abortion, human trafficking, modern slavery, oppression,” she went on. “MLK did not serve politics. He didn't serve government. He served God. We are not color blind; we are one human race; one blood, created in living color.”

Abortion leading cause of deaths for African-Americans

Many have pointed out the awful irony of Planned Parenthood using a civil rights leader to promote abortion, when it is responsible for the deaths of so many black babies. Abortion is the leading cause of death among African-Americans, and their community is affected by abortion more than any other minority – black people make up 13% of the US population, but endure 35% of abortions.

For example, in New York City, a black baby is more likely to be aborted than to be born. According to a city Health Department report released in May, between 2012 and 2016, black mothers in New York terminated 136,426 pregnancies and gave birth to 118,127 babies. By contrast, births far surpassed abortions among whites, Asians and Hispanics.

Black pro-life organisations point out that the majority of Planned Parenthood clinics are located in minority neighbourhoods. Planned Parenthood also has a long history of being associated with racism, going back to its founder, Margaret Sanger.

What did Martin Luther King think about abortion?

Dr Martin Luther King Jr made no statements about abortion, perhaps because at the time he was assassinated (1968) abortion was not a particularly polarising or topical issue. Abortion advocates love to point out that he accepted the Planned Parenthood Margaret Sanger Award in 1966, but this was at a time when Planned Parenthood was officially opposed to abortion, concentrating on birth control.

Alveda King believes that her uncle would oppose abortion if he were alive today, saying: “Dr. King would never have agreed with the violent violation of the civil rights of the millions of aborted babies, and Planned Parenthood's subsequent blitz of women's health problems related to chemical and artificial birth control methods.”

On the contrary, there is no evidence he supported abortion. While we can't know for sure what MLK's views on abortion would be, it seems presumptuous at best to assume he would wish to promote an organisation which systemically deprives a whole section of society of the basic right to life, and profits of the deaths of black babies.

Published with permission from the Society for Protection of Unborn Children.