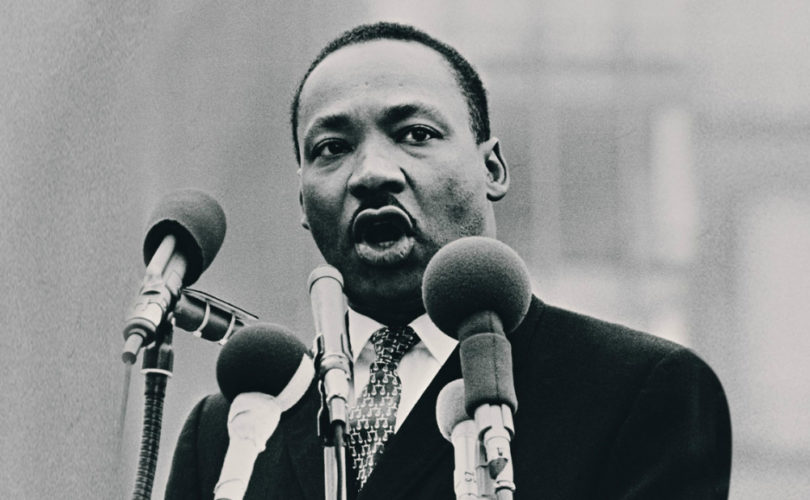 King Rules: The Truths for You, Your Family, and Our Nation to Prosper.
Alveda King.
Thomas Nelson Publishers. 224 pages.

How would Lincoln deal with the red state-blue state divide? How would Reagan respond to today's foreign policy questions? The search for answers in the present by searching the wisdom of great figures of the past is at once inherently conservative and a necessary part of social progress. As our nation mulls over questions of life, poverty, education, tolerance, and societal disintegration, Alveda King brings the insights of her family – especially her uncle, Martin Luther King Jr. – to the fore in her latest book, King Rules.

The quick read, which includes a helpful overview of the King family, is part memoir, part discourse on human wisdom. Alveda comments on 10 pressing issues and the principles that her family used, or would use, to address them – among them hot-button issues like abortion, homosexuality, and public discourse.

Were he alive today, MLK would begin by encouraging people to have the strength to address these issues at all. “As I was compiling notes for this book, I was tempted to shy away from controversial topics like human sexuality and abortion and stick to safe topics like education, peace, poverty, and the like,” Alveda wrote. “Yet I had to remember that my Uncle M.L. [as she calls MLK throughout the book] and other family members often trod the road less traveled and were not afraid to speak truth, even when the topics were controversial.”

Properly steadied, Alveda turns her eyes to the human condition.

If he were alive today, Martin Luther King Jr. would oppose abortion as fiercely as he fought racism, Alveda writes, drawing on his own writings to make her case.

“One of my uncle's most oft-quoted proclamations comes from his 1958 book, Stride Toward Freedom: 'The Negro cannot win…if he is willing to sell the future of his children for his personal and immediate comfort and safety.' While he spoke this in a civil-rights context, this is an irrefutably pro-life statement,” she wrote. “In his 'Letter from Birmingham Jail,' Uncle M.L. underscores this sentiment by speaking out against 'such ancient evils as infanticide,' yet another clear indication that he never would have come out in favor of the institutionalized killing of unborn children.”

Alveda accuses Planned Parenthood of “continuing to trade on his name to this very day.” MLK Jr. was given the organization's Margaret Sanger Award in 1966 – a fact the nation's largest abortion provider continues to highlight. On January 17, 2011, Cecile Richards said that this award was granted “in recognition of his excellence and leadership in furthering reproductive health and rights.” However, the award said nothing of reproductive issues, instead saluting King's “courageous resistance to bigotry and his lifelong dedication to the advancement of social justice and human dignity.”

Alveda notes that MLK sent his wife, Coretta Scott King, to accept the award in his place, and Alveda feels that Coretta's speech contained “several statements that in my opinion contradict foundations of his own philosophy.” Abortion had not become a national issue, as it would not be legalized nationally until five years after King's death. Whatever King's interest in or embrace of voluntary family planning, he never advocated for abortion-on-demand.

“I am absolutely sure that Uncle M.L. would be appalled to know Planned Parenthood is the leader in an industry that is responsible for more than fifty-six million abortions since the Roe ruling in 1973, according to the Guttmacher Institute – that‘s 1.4 million babies killed in utero every year for the last four decades,” she wrote. “His dream never included that number.”

Alveda believes that MLK Jr. would have deeper reasons to oppose abortion – reasons rooted in his own family history.

MLK Sr. saved Alveda and her baby from abortion

One of her own family members was nearly among that number. In 1950, her mother got pregnant as a senior in high school. Her grandfather, whom she addresses as “Daddy King” – Martin Luther King Sr. – insisted his daughter keep the baby…who turned out to be Alveda King. Alveda wrote that she was an adult before she knew “I was very nearly a victim of abortion myself.”

Yet the pain of abortion would visit the King family in the future. Alveda wrote that a doctor performed a D&C abortion without informing her she was pregnant, and Alveda went on to experience abortion voluntarily. She also experienced deep post-abortion trauma from each procedure, which, she wrote, strained her relationship with her husband to the breaking point.

She nearly had another abortion after a relationship with a medical student – but the father refused to have any part of it. “I‘m not going to help you with this, Alveda,” he said. “That‘s forty-six chromosomes – twenty-three from you and twenty-three from me – and I want mine back alive.”

She went to Daddy King for help sorting out the claims of Planned Parenthood that the undifferentiated mass of cells in her womb was “not a baby” yet. “They are lying to you girl,” MLK Sr. said. “This is a baby not a lump of flesh. No one is going to kill a great-grandchild of mine, Alveda.”

His words set the eventual mother of six on the path of healing, strengthened by her personal acceptance of Jesus Christ as her Lord and Savior in 1983. Part of her parental advice included strengthening Martin Luther King Jr.'s published embrace of sexual purity. In Ebony magazine in November 1957 he wrote, “Real men still respect purity and virginity within women.”

“I have taken his advice a step further with my sons and grandsons,” Alveda wrote. “Young men as well as young women need to make it their mission to guard their purity.” In that, she shows us another fitting example of equality rooted in Christianity.

Yet some believe the Christian worldview has led to a grave inequality in the treatment of homosexuals and invoke her uncle's memory in favor of redefining marriage.

Is gay “marriage” the next civil rights issue? Alveda doesn't think so – and neither would her uncle, Martin Luther King, she writes.

“My Uncle M.L. lost a high-ranking member of his organizational team, Bayard Rustin, because Rustin was openly gay,” she wrote. “Rustin was convinced that the homosexual agenda should be included in the civil rights struggle for desegregation. But Uncle M.L. clung to the scripture and refused to acknowledge homosexuality as an issue that needed to be addressed on the public platform where the battle for skin color equity was being engaged.”

Alveda wrote that, as a man deeply rooted in the Bible, MLK would share his family's views that marriage is the union of one man and one woman for life. “Other forms of human sexuality including adultery, fornication, and homosexuality don‘t fit God‘s design.”

Those who struggle with same-sex attraction must yield themselves to Christ, asking the Holy Spirit to sanctify and empower them to live in victory over their sin, she wrote.

Overcoming sin through struggling, with God's help, is something she knows from personal experience. She writes of her own fight against anti-white racism, inflamed by her uncle's assassination in 1968. As her white roommate at Murray State University, Suzie, tried to comfort her, she exploded. “What did she know about the feelings of black people? 'Get away from me,' I yelled. 'I hate you – you killed my uncle!'” The feeling lingered and metastasized. “'I hate white people,' I said to my father over and over again. 'They killed my uncle.'” Her father, she said, told her that the fault lay not with a race but with “the devil.” She wrote of her father's reconciliation with a bitter enemy – Rev. Jesse Jackson – as another example of bitterness giving way to harmony.

The modern civil rights movement: The Right to Life

If the fight to redefine marriage is not the locus of the modern fight for civil rights, what is? Protecting the unborn.

Alveda writes that she considers sidewalk counseling, and speaking out against abortion, a continuation of her uncle's non-violent movement. In addition to civil rights marches, “I have been involved in several peaceful demonstrations, including leading prayer vigils at abortion mills, and the pro-life freedom rides. I will always believe in the effectiveness of this sort of demonstration.”

Those who wish to continue King's campaign can celebrate his birthday, then attend the annual March for Life. His niece tells us the two events are closely aligned, not only chronologically, but ideologically.

Alveda addresses these issues and much more – including poverty, education, black self-reliance, the principles of non-violent resistance, and more – in a book that reads as though she were sharing her family history with you on the front porch. Read it for new insights into the King family and the philosophical pillars of the civil rights movements, old and new.

King Rules is available from Amazon.com, among other outlets.