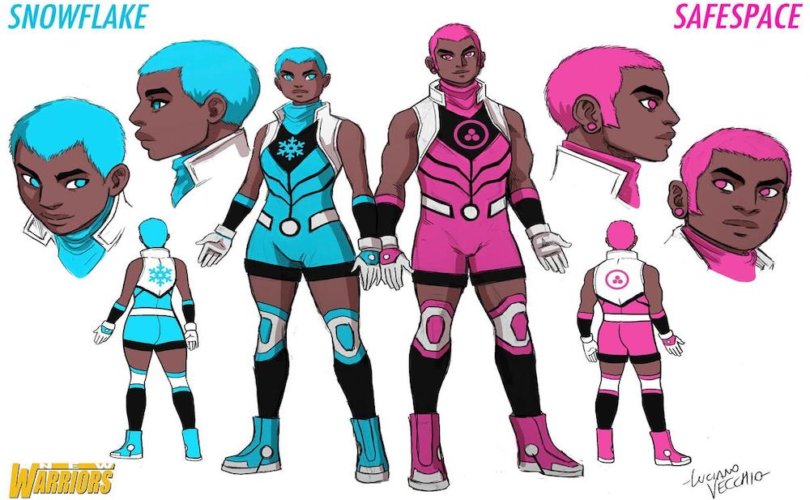 March 19, 2020 (LifeSiteNews) – Despite backlash from both fans and comic shop owners over the years, Marvel Comics continues to infuse its superhero offerings with “woke” characters and themes, this week announcing its most heavy-handed attempt yet with a new iteration of the teenage hero team the New Warriors.

Marvel announced the relaunch Tuesday in a press release, explaining that the previous members of the team will mentor a new cast of characters, each of whom represents a different cultural theme, such as internet memes or goth subculture. But the two who’ve received the most attention are Snowflake and Safespace, a pair of twins who see the superhero business as a “post-ironic meditation on using violence to combat bullying.”

“Snowflake is non-binary and goes by they/them,” writer and creator Daniel Kibblesmith explained. “The connotations of the word 'snowflake' in our culture right now are something fragile, and this is a character who is turning it into something sharp” with the power to make ice projectiles shaped like snowflakes.

Both terms are predominantly associated with political correctness on college campuses, particularly the idea that young liberals need to be insulated from contrary ideas that might “trigger” them. But Kibblesmith says his characters adopted them as code names to “take those words and kind of wear them as badges of honor.”

So far, comic book fans are less than impressed by the new additions to the Marvel Universe:

mfs are named SNOWFLAKE and SAFESPACE this is absolutely bait for the “get woke go broke” people because they know that’s the only way this will get publicity you cannot convince me otherwise pic.twitter.com/YhC89wgHPW

I watched the video with the writer too and this whole thing stinks of pic.twitter.com/W6jWO1vJ0t

heres to snowflake and safespace and their long and illustrious career of appearing in like the first four issues of this event comic, then being relegated to background characters, and then reappearing in 15 years time on a “marvels top ten dumbest characters” listicle

Even the far-left blog The Mary Sue panned the duo, arguing that even as LGBT “representation” goes, there “needs to be a lot more thought put into it than this.”

Mavel’s comic-book business has always been more political than its film side, although the popular Marvel Cinematic Universe franchise is slated to feature same-sex romances in its upcoming films The Eternals and Thor: Love & Thunder.

This is despite the company’s poor success with “social justice warrior” themes in the past. In 2018, Marvel canceled all three of its comic book series that won GLAAD awards the previous year, citing poor sales. The year before, the publisher faced backlash from comic retailers for harming their business with their content’s social-justice emphasis.