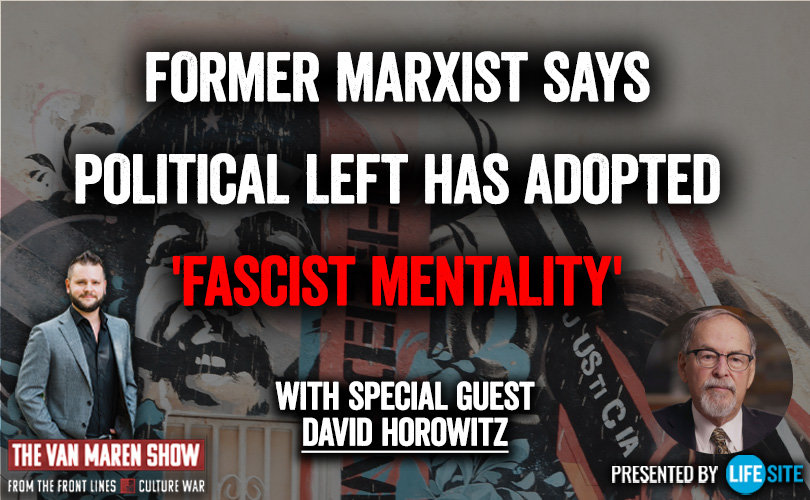 (LifeSiteNews) — One of the leading conservative voices in the United States, who is a former Marxist, slammed the political Left for its promotion of radical ideologies in society.

In this episode of The Van Maren Show, Jonathon’s guest David Horowitz pointed out that several government agencies are taking dictatorial, Nazi-like, and “fascist” measures against freedoms and the people.

Horowitz, who has written many books on the issues facing our culture, “was raised by card-carrying Communists” and was also closely connected to the Black Panther Party. He told Jonathon how his experience of having seen Marxists and Leftists first hand has made him particularly critical of today’s Democratic Party.

Speaking on the riots and protests by Black Lives Matter and antifa in 2020, Horowitz called out these groups for the violence and destruction in American cities. “You have a fascist mentality that has enveloped the political left,” he said.

Horowitz further discussed how the attacks on the people from government agencies such as the FBI and the Treasury Department are demonstrating that “we’re in a fascist state.” He mentioned how the Department of Justice is threatening and even acting to punish parents who are standing up for their kids in school boards.

Horowitz also talked about how the Biden administration is looking to create a national police force, as well as “proposing 18,000 Treasury agents,” which he likened to the Gestapo of Nazi Germany. “It’s scary and nobody is really talking about it,” he added.

Finally, Horowitz highlighted that while people on the left attack their opponents for racism, they themselves are the real racists. He said he recognizes a “weakness in this movement,” as American citizens, especially parents at schools, begin to stand up to what the critical race theory and gender ideologies being taught to their kids.