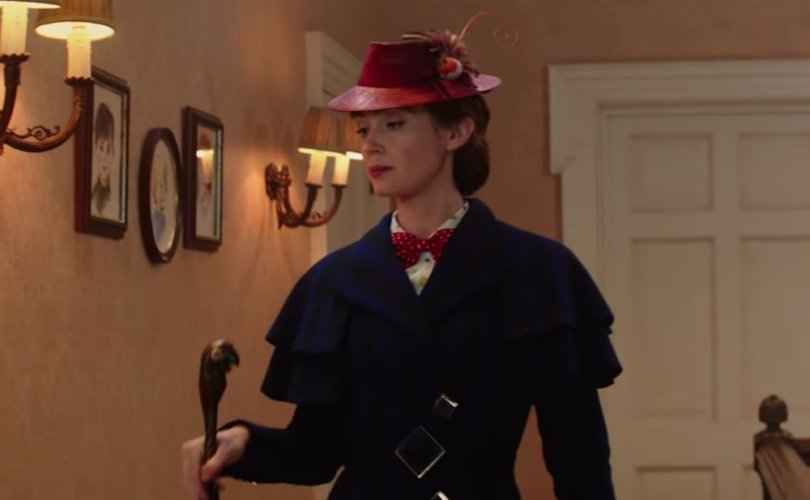 March 28, 2019 (LifeSiteNews) — The socially conservative Focus on the Family called Disney’s 2018 film Mary Poppins Returns a “delightful” sequel that “brims with positive themes,” but a third entry in the beloved series could be very different if director Rob Marshall gets his way.

During a recent Disney Studios press event for the movie, Marshall gave an interview to the pro-LGBT website The Advocate in which he expressed interest in using a future film in the beloved children’s series to delve deeper than its predecessors into adult social commentary on a controversial issue.

“Your film also continues this tradition of addressing movements of social change,” the interviewer said. “So we saw women’s suffrage in the first film, and then we see workers’ rights in this one. And I’m curious why it was important for you to address that social movement in a film that is for kids.” (The 1964 original features a song about the movement to give women the right to vote.)

Invoking Walt Disney’s famous words that he made films not “primarily for children” but for “the child in all of us,” Marshall responded that he “wanted to root [the story] in a real place. That’s why Jane works for the rights of workers. This is the ’30s, the Depression era when it was the great slump. There was a sadness in the world and [Mary Poppins] needs to come back.”

“Do you see the next generation advocating for causes like gay rights, LGBTQ rights?” The Advocate asked.

“Wouldn’t that be great? Please, Lord. That’s exactly what should be happening,” Marshall agreed. “I’m always so aware of that, being a gay man myself. I mean, our movie takes place in the ’30s. But if it were to take place now, that's exactly what it should be.

“I understand so deeply what it’s like to be on the outskirts and not feel like you are worthy,” he continued. “And I will say that kind of passion to explore acceptance in life is something that’s so important. And so, yes, I’d be all for that, for sure.”

It remains to be seen whether Disney would agree to actually put such content in a hypothetical Mary Poppins 3, but the entertainment giant has alarmed parents with other pro-homosexual messages in its its parks; merchandise; and teen, kids, and even preschool TV shows.

Disney has yet to include explicit homosexuality in its theatrical releases, but the 2017 live-action remake of Beauty and the Beast caused controversy for implying a supporting character’s homosexuality through several brief moments. Speculation is currently running rampant as to whether Disney gave into activist demands to make Frozen protagonist Elsa a lesbian in the upcoming sequel (LifeSiteNews’s petition against doing so currently has almost 20,000 signatures).

Disney is rumored to feature its first openly homosexual character in its October 2019 film Jungle Cruise, though pro-LGBT activists are reportedly dissatisfied that a December 2018 test screening had a “coming out” scene where the character “admits he isn’t into ladies,” but it neither uses the word “gay” nor expressly states that he’s attracted to men.