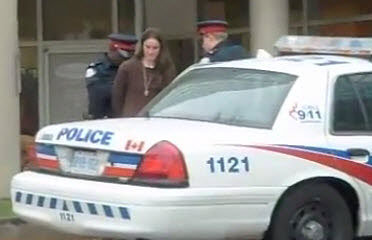 Mary Wagner was arrested Tuesday morning after entering the Bloor West Village Women’s Clinic. Mary entered the abortion facility around 9:15 a.m., with pairs of white and red roses with attached pregnancy support hot-line cards. She had pro-life counseling pamphlets available to give to the women who were scheduled for abortions that hour.

It did not take very long for the police to arrive, three cruisers within 35 minutes. Mary was arrested and handcuffed around 10:00 a.m. Several supporters were outside on the sidewalk, praying and distributing pro-life pamphlets to the general public. One of the supporters, Father Paul Nicholson of the London Catholic Diocese, was present to lend moral and spiritual support to Mary. He stated that Mary is acting in solidarity with the victims of abortion, and that her action is “pricking the guilty conscience of a nation that is pretending to play dumb” when it comes to the killing of innocent unborn human beings.

Mary will be spending Christmas with fellow inmates at Vanier Centre for Women, in Milton, Ontario. Court dates will be set on Wednesday.