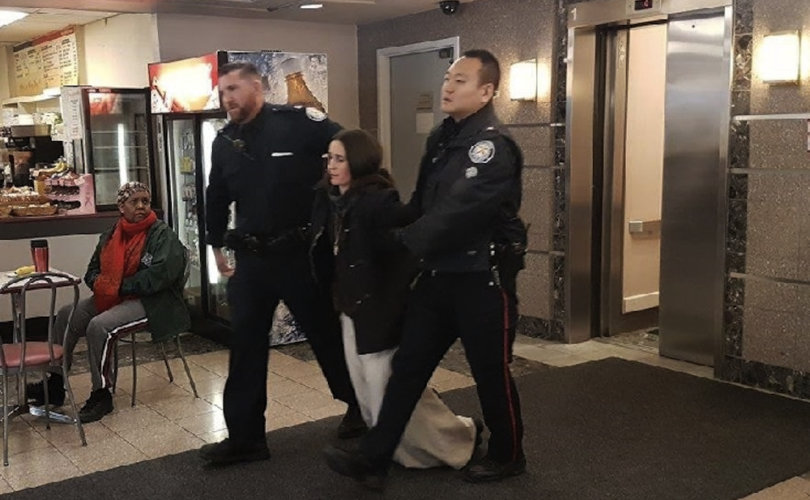 Mary Wagner is arrested and dragged to a police cruiser on December 8 at Women’s Care Center in Toronto. Krystyna Krolak

TORONTO, July 12, 2018 (LifeSiteNews) — Mary Wagner is back in jail after an Ontario judge sentenced her to 7.5 months for mischief and breach of probation Thursday.

Because Wagner has already served three months in jail awaiting trial, the sentence works out to 90 days, of which Wagner will serve 60, her lawyer Peter Boushy told LifeSiteNews after the trial.

Wagner took off her Miraculous Medal and scapular and handed it to a friend as 40 or so supporters in the court stood up while the bailiff handcuffed her and led her away.

Before Justice Neil Kozloff pronounced the sentence in the packed courtroom, Wagner asked him to think about “the other elephant in the room — the small one, the unborn child, which according to Canadian law is not a human being.”

Wagner, 44, was referring to Kozloff’s words on March 7, when it was clear her two-day trial would carry over another day.

At that point, Wagner had been in jail since her December 8 arrest at Toronto’s Women’s Care Clinic.

The judge said then he “wanted to address the elephant in the room,” which was Wagner’s refusal to agree to bail condition to stay away from abortion centers, coupled with the difficulty of getting an early date to finish the trial.

“I don’t want her kept in custody for the convenience of the Court,” Kozloff said.

Crown attorney Kasia Batorska agreed to release Wagner on the sole condition she return for her trial.

When proceedings resumed July 12, Wagner told Kozloff “there shouldn’t be abortion clinics” and that she is upholding the law.

“I feel duty bound to go” to the abortion center to protect unborn children,“to do what I can to reach the hearts of their mothers,” she said.

Wagner pleaded not guilty to mischief and breach of probation, charges stemming from her arrest at the abortion center located on the 5th floor of a medical building at 960 Lawrence Avenue West.

Batorska argued the Crown had proved beyond reasonable doubt Wagner breached a probation order not to go within 100 meters of any abortion center in Ontario, and committed mischief by interfering with the lawful operation of a business.

“The mere presence of Ms Wagner was enough to halt the operation of the clinic,” she told the Court.

Between the abortion center staff calling the police at 9:28 am, and Wagner’s arrest at 10:00 am, “we’re talking about a disruption of at least 30 minutes,” Batorska said.

Kozloff took about an hour and a half to rule it was “manifestly clear” Wagner was guilty, and sentence her to six months for mischief, and 45 days for breach of probation.

“It is apparent to me she is not and will not be deterred from breaking the law. Indeed, in her submissions to me, she believes she is, quote, upholding the law,” Kozloff noted.

“If people are free to ignore court orders because they believe that their foundation is unconstitutional, anarchy cannot be far behind,” Kozloff said, quoting a Supreme Court ruling cited by Dunnet.

Kozloff also quoted the 2012 trial judge’s finding, cited by Dunnett, that Wagner showed “willful disregard of a law she was fully aware of, which she disagreed with and which she chose to flout, disregarding the interests of the clinic’s patients, their companions and the clinic’s operators, which the highest court in the land has long deemed worthy of protection.”

The judge further relied on Ontario Superior Court Justice Ken Campbell’s 2012 ruling, which noted Wagner “had clearly not been deterred by the earlier sentences.”

Kozloff cited Campbell’s assertion that the court had to make Wagner “appreciate” she would get “increasingly greater custodial sentences” if she continued to commit the offense of mischief.

Campbell, however, ruled the trial judge’s 92-day sentence for Wagner was “manifestly unfit” and reduced it to time served.

Perhaps that’s why Kozloff concluded his sentence, which was less than the Crown requested, by telling Wagner he was “mindful that you will be incarcerated.”

Boushy, who argued the case before Campbell along with Russell Browne, told LifeSiteNews the charge of mischief obscures what goes on in the abortion centers.

“The Crown repeatedly mentioned that Mary Wagner was interfering with the operation of a business,” he said. “But I think we have to consider that the operation of the business concerns the extinguishing of babies in their mother’s womb.”

Among supporters for Wagner at the trial were participants from the Show The Truth campaign, including Fr. Tony Van Hee, who later demonstrated at Finch and Dufferin with signs of abortion victims.

Also attending the trial were two Americans involved in the Red Rose Rescues there, which take their inspiration from Wagner, who has spent almost five years in jail for her efforts to save women and children from the violence of abortion.

Wagner is expected to be released by mid-September. Her mailing address is: Vanier Centre for Women, 655 Martin St, Milton, ON L9T 5E6.