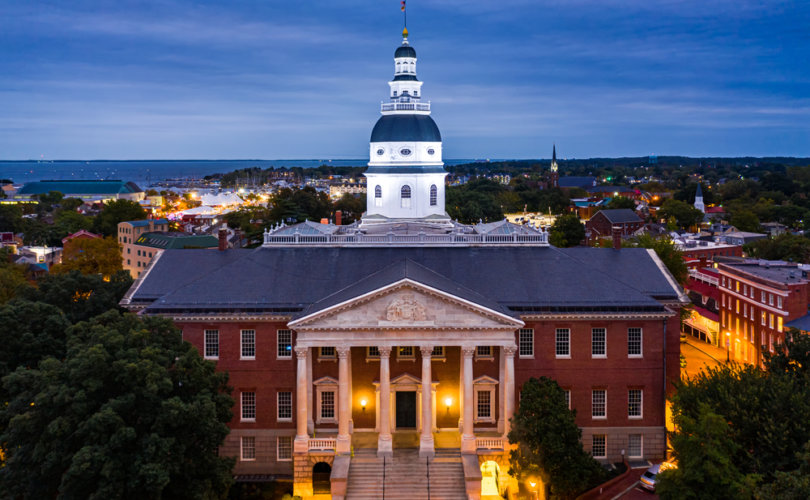 ANNAPOLIS, Maryland (LifeSiteNews) — Although a bill proposed in the Maryland Senate which would’ve allowed babies to be left to die for as long as the first 28 days after birth was withdrawn earlier this month after attracting national attention, two equally heinous abortion bills remain alive in the Annapolis state house.

The Maryland House of Delegates passed HB 1171, titled a “Declaration of Rights — Right to Reproductive Liberty,” which aims to place a question on ballots during the November state elections asking voters whether the right to an abortion should be enshrined in the Maryland Constitution.

Democrat legislators in Maryland, like those in other states, fear that the U.S. Supreme Court could overturn its controversial 1973 Roe v. Wade ruling this year, which banned states from outlawing abortions.

While the measure sponsored by Maryland House Speaker Adrienne Jones easily passed in the lower chamber, its progress was ostensibly halted in the state Senate on Friday.

“I am proud that our work as Republicans, including Floor amendments like my amendment to save all babies born alive after abortion like Gianna Gessen, have succeeded in stopping the horrific Abortion Amendment to the Maryland Constitution,” said Delegate Dan Cox in a statement to LifeSiteNews.

Senate Republicans let it be known that they were going to “blow [HB 1171] up with tons of amendments that were really going to make Democrats look bad,” said House Delegate Neil Parrott.

“Senate President Bill Ferguson agreed to hold the bill,” explained Parrott to LifeSiteNews, “not killing it, but not planning to move it forward.”

A bill can only be rendered officially dead if its sponsor chooses to withdraw it.  That has not happened with HB 1171.

Parrott warned that House Speaker Jones could try to force the Maryland Senate to resurrect the bill this week by threatening to hold other bills hostage.

‘A reckless and wrong bill’

A separate measure, HB 937/SB 890, dubbed the “Abortion Care Access Act,” sailed through the House of Delegates and just underwent its third and final reading in the Maryland Senate. It passed in a 28-15 vote, largely along party lines. The Senate version now will be sent to the lower chamber where it will also go through a series of three readings, and if passed there, will be sent to Republican Gov. Larry Hogan’s desk to be signed into law.

The bill expands abortion providers beyond physicians to include other healthcare occupations, including nurses, midwives, and physician assistants. Additionally, taxpayers would pay $3.5 million a year on abortion training on top of the several million dollars a year that Maryland taxpayers already pay for 4,000 abortions under Maryland’s Medicaid program.

“At this point in time, we do not have enough persons to do abortions in Maryland, given the need,” lamented SB 890’s sponsor, Democrat Senator Delores Kelley. “Most of our counties have not a single abortion provider.”

“I rise with a heavy heart in opposition and to share many objections to Senate Bill 890 which makes a dramatic change in Maryland’s health policy that will negatively impact the health and safety of women across the state,” said Senator Carozza during floor debate. “This is not a debate about abortion being legal.  This is about deep opposition to moving Maryland’s already liberal abortion laws to the extremes, especially when it comes to late-term abortions and places women’s health at risk.”

More outrageous in this bill is that the Maryland Department of Health will use taxpayer money to train workers for a private industry that kills the youngest Marylanders … Insurance coverage in SB 890 is a dream come true for the abortion industry.

Carozza noted that Maryland already has the fourth highest abortion rate in the country.

Senate Democrats voted down every amendment –– nine in all –– offered by Republicans, including two parental notification amendments requiring abortion providers to notify a parent or guardian before performing abortions on girls as young as 13, or younger.

“This is an extreme and radical bill. At a time when science has shown us the wonder of life in the womb this bill expands who can perform abortions — all the way up through nine months — away from trained physicians with the stated goal by the proponents of more abortions performed, calling it a jobs bill, a job creation engine,” said Senator Justin Ready.

“The Democratic Party have come far from the position of ‘safe, legal, and rare’ abortion espoused in the 1990s. Now, they have the position that any commonsense guardrail or restriction — even for late term abortion — is wrong,” Ready told LifeSiteNews.

Everyone agrees that we face a critical workforce shortage of nurses and professional medical support staff in Maryland — but what does this bill do? It allocates $3.5 million a year in taxpayer funds to get more abortionists. And, in a state where having a baby even for the best insurance plans leaves families with thousands of dollars in out of pocket costs and deductibles, this bill says that even the richest person doesn’t have to pay any kind of fee or deductible, even for elective abortions.

But we’ve left birthing untouched. [This is] a reckless and wrong bill.

Delegate Neil Parrott noted that the $3.5 million in tax dollars to train additional abortionists via the Abortion Care Access Act is something that the state government does not do for any other profession in the Old Line State.

“The money will not go into a State account,” explained Parrott. “They’re going to pay a non-profit organization, most likely, Planned Parenthood.”

“We condemn those who were born into slavery as an institution and we say how foolish they were not to override slavery right away,” said Sen. Robert G. Cassilly. “Colleagues, I tell you as we stand here today, … Fifty years from now people will look back and say that those of us who supported this … how barbaric of a people we must have been.”

Republicans in both chambers are asking the public to keep pressure on Maryland legislators to quash the bills.