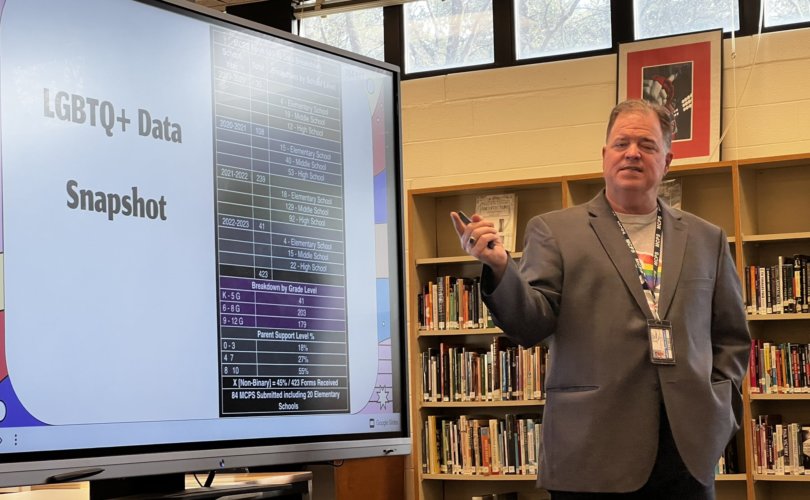 (LifeSiteNews) — According to new data, a public school district in the United States has seen an increase of over 500% in children identifying as gender nonconforming within a period of only few years.

New data that was released last Thursday by an employee in the school district showed that Montgomery County Public Schools (MCPS), the largest district in Maryland, has seen a 582% increase since 2019 of children identifying as something other than their biological sex.

“This isn’t data that the outside world has seen before,” conservative activist Bethany Mandel said in an interview with The Daily Caller. “It was accidentally shared and is incredibly illuminating.”

The data was released on Twitter by the vice principal of one of the district’s schools. The post included pictures from a presentation at a meeting of a “Pride Alliance” group and a picture of a chart containing data on the number of children between 2019-2022 who consider themselves gender nonconforming.

“What an amazing kickoff event for the first in-person meeting MCPS Pride ALLiance meeting!” tweeted Elicia Eberhart-Bliss, the acting assistant principal of Quince Orchard High School on October 6. “QO was proud to host this opportunity to share glows and grows for LGBTQ+ students and staff.”

This data was accumulated through surveys filled out by school counselors when they are approached by children identifying as something other than their birth sex, and they show the extent to which LGBT indoctrination has permeated the school system.

Christopher Cram, a spokesperson for MCPS, told The Daily Caller in an interview that while the numbers represented in the data are high, they may not be fully accurate as many of the students who identify as gender nonconforming do not necessarily fill out the surveys.

“A full accounting of students who may identify as LGBTQ+ or gender nonconforming is impossible to know,” Cram said. “This information is covered by privacy rules and is only collected if a student offers that information to a counselor. Therefore, a percentage ‘of’ or ‘rise’ cannot be determined to be considered accurate in any way.”

Mandel said the data is not limited to schools in Maryland or Montgomery County, but that this phenomenon is nationwide.

“There is a clear explosion of gender-confused children year over year, and it’s clear the majority of those are legitimately children, middle school and below,” Mandel said. “This isn’t just a Montgomery County problem, it’s nationwide; we were just able to get a glimpse of the data here.”