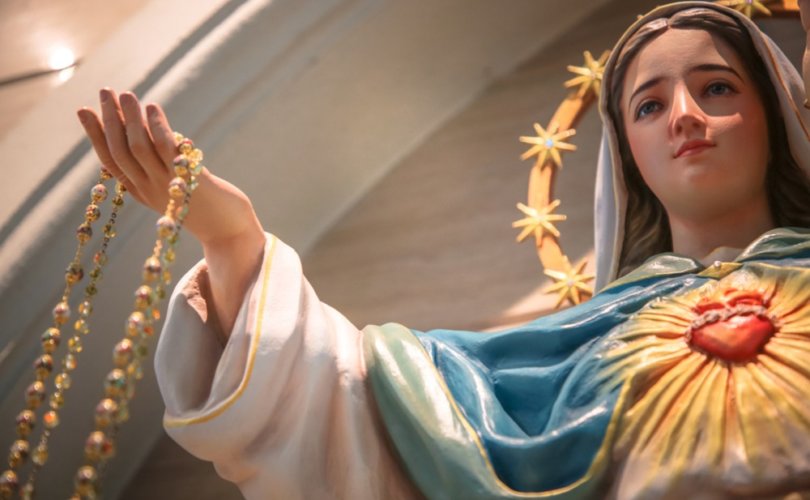 May 20, 2020 (LifeSiteNews) — Hell is “not closed or empty,” and Our Lady’s plea at Fatima for prayers and sacrifice to save souls from eternal damnation remains “urgent and for today,” Fr. Serafino Lanzetta told the Rome Life Forum.

A parish priest of St. Mary’s, Gosport, in the diocese of Portsmouth, U.K., where he is a member of a Marian Franciscan community, Fr. Lanzetta gave an address on “co-redemption and Marian consecration in the light of the Fatima message for our times,” for the 7th annual Rome Life Forum.

The forum is cosponsored by LifeSiteNews and the Voice of the Family and moved online this year because of the coronavirus pandemic.

If the Church would declare Mary as co-redemptrix as the fifth Marian dogma, that would “weld together” co-redemption and Marian consecration “as the identity of each Christian in this world,” said Fr. Lanzetta, who earned a habilitation, the equivalent of a doctorate, in theology from the Theology Faculty of Lugano in Switzerland.

“This would be propitious to officially gather that special Marian army needed in the latter times, marked by a special presence of our Mother and Queen, the Immaculate Conception” and “prepare for the triumph of the Immaculate Heart of Mary, so dear to each one of us.”

Mary is co-redemptrix because she “cooperated actively with Christ in carrying out the redemption of mankind,” and “her maternal contribution, though subordinate to the one of Christ, was by the will of God deemed … necessary in relation to us,” he explained.

“As the first Eve had an influential role in the ruin of mankind, so the new Eve, Mary, with her obedience to God, with her fiat to God’s plan of salvation caused, in Christ and through Christ, the restoration of humankind.”

Mary’s role as co-redemptrix was “consummated” on Calvary when she consented to the “immolation” of her Son, and where the two offerings — “one is the body of Christ, one is the heart of Mary,” became “one sacrifice,” he said.

At Calvary, Mary also fulfils her role as the woman in St. John’s vision in Revelation 16:21 who cries out in the pain of childbirth.

“As the true mother of the living, the new Eve, Our Lady really gives birth to us. She on Calvary once again generates Christ for us in a bloody redeemer, so to speak,” Fr. Lanzetta said.

“And in Him and for Him she generates us to supernatural life. Her contribution is made possible by Christ, and is offered only in Christ so as to prepare the cooperation of us in our own salvation.”

Fr. Lanzetta emphasized that popes from Leo XIII to Benedict XVI have reiterated the doctrine of Mary as co-redemptrix as part of the Church’s ordinary magisterium.

Vatican II avoided the term to appease Protestants and further ecumenical dialogue, but the doctrine is present in paragraph 58 of Lumen Gentium, which describes Mary as “consenting to the immolation of her Son,” he said.

While there have been difficulties in accepting the doctrine since Vatican II,  “prudent theologians” have affirmed that it “has been proved to be part of the revelation of God” and is “mature enough to be solemnly proclaimed as a dogma of faith” if a pope wants to do so, Fr. Lanzetta said.

Mary’s request to the children at Fatima that Russia, all nations, and each single soul be consecrated to her Immaculate Heart must be seen in the light of her role as co-redemptrix, Fr. Lanzetta said.

“The logic of this request to consecrate Russia to her Immaculate Heart is understandable in the framework of the theology of Marian consecration, whose foundation is the soteriological contribution of Our Lady to our own salvation.”

Mary told Lucia at Fatima in June 1917 that “my heart will be your refuge and the way to lead you to God.” The next month she revealed to the three children a vision of Hell and told them many people would go there because no one was praying or making sacrifices for them, Fr. Lanzetta said.

She also requested that Catholics make the five first Saturdays devotion, which along with the consecration of Russia to her Immaculate Heart are the efficacious means to prevent Russia spreading its errors around the world.

However, because the consecration to Russia was delayed, and then made not as “precisely” as Mary had asked, Marxist ideology has been able to “triumph over the ruins of a collapsed communism,” Fr. Lanzetta said.

Marxism has been “transformed” into a “worldwide petition for an equal society shaping a new man made in the likeness of man with his instincts and desires, with not even a gender-based difference,” he said.

“This is our world today,” and this ideology is even “embraced within the Church,” resulting in a crisis of faith and a “creeping apostasy.”

Marian consecration is an essential and efficacious remedy to this, Fr. Lanzetta said.

Consecration is “perfect” when one makes a sacrificial offering of oneself to God through the mediation of His Mother, he said.

“This is the way to respond to the call of the Fatima message: to offer everything to God in order to cooperate with Him for the salvation of mankind, as Our Lady did in a very unique manner.”

However, consecration is not the same as “entrustment.”

Entrustment describes an “easier” commitment, one which avoids sacrifice in favor of a “mere pastoral and existential approach to faith,” and which derives from a “minimalist, shallow consideration of Mary in our salvation,” he said.

“Our Consecration to Mary lets us live in full the mystery of Marian co-redemption as asked by Our Lady of Fatima,” Fr. Lanzetta said.

“In this way we can truly respond to Our Lady’s request to offer sacrifices so that many souls might be saved from an easy fall, so to speak, into eternal perdition. This appeal is urgent and it is for today.”

To see the video of Fr. Lanzetta’s talk, go here.