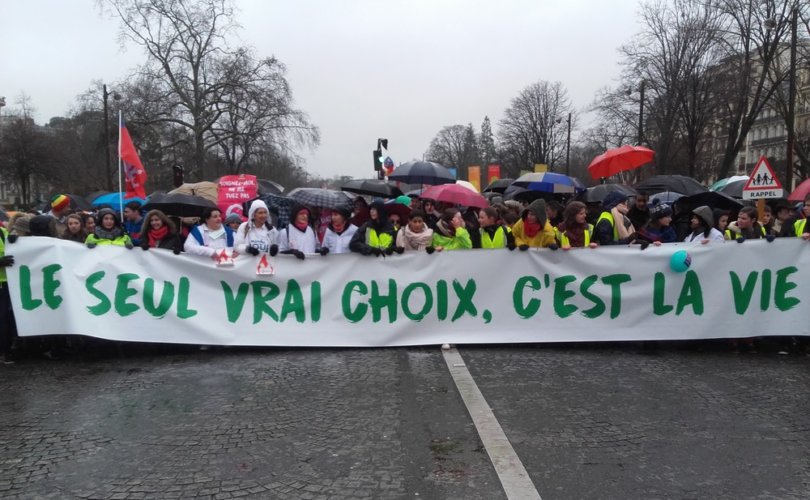 RENNES, France, January 26, 2018 (LifeSiteNews) – Around 50 masked abortion supporters, at least one wielding a smoke bomb, surrounded a bus carrying Catholics to the Paris March for Life.

One of the protesters threw the smoke bomb into the bus. It burned at least two people’s clothes before the pro-lifers were able to throw it off the bus.

According to Le Telegramme, which published the first report on the attack, the pro-life passengers ranged from ages 15 to 75. The abortion supporters blocking the bus were shouting hateful things and “danced around the bus,” a representative of the pro-lifers said.

Police eventually had to escort the bus several “hundreds of meters” to the highway. The pro-life group was more than an hour late to the March for Life as a result of the ambush.

The skirmish is reminiscent of the reactions of American college students to a bus promoting free speech and the biological reality that there are two sexes. Harvard students threw meat at the bus and graffitied it.

The bus had its windshield and windows smashed at its first stop near the United Nations in New York City. In Boston, a pro-LGBT activist threw hot coffee inside the bus onto the driver.

“Far-left violence is commonly seen against police in France and is most common in Paris,” Breitbart’s Chris Tomlinson wrote. “Last year, during the French presidential elections, far-left Antifa extremists fought with police and used Molotov cocktails to set one officer on fire.”

He called the activists who attacked the bus “alt-left.”