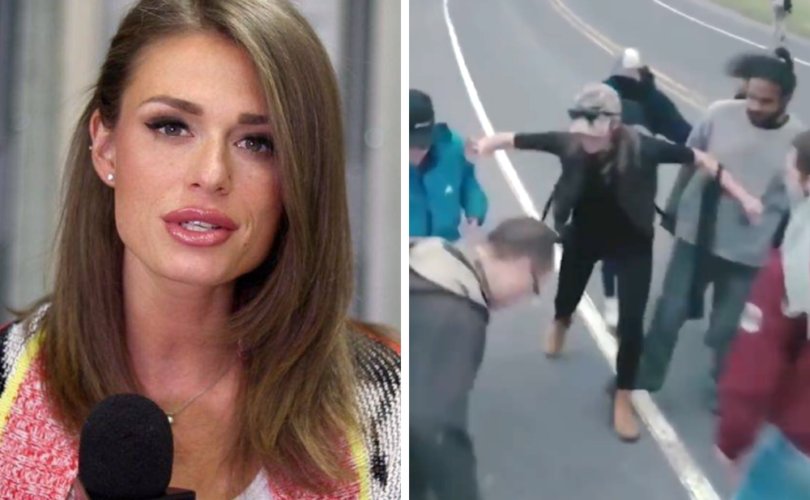 ROXHAM ROAD, Quebec, May 25, 2018 (LifeSiteNews) – A conservative woman journalist physically assaulted by self-styled “antifa” protesters at a Quebec immigration protest is launching a complaint against both her attackers and the police for their inaction.

And in the wake of the disturbing attack, conservative commentators have accused the mainstream media of burying the story because they disagree with Faith Goldy’s political views.

Goldy was set upon by a far-left gang on May 19 while attempting to video an anti-immigration protest at the illegal border crossing on Roxham Road, near Colette, Quebec.

As shown in the video below, Goldy was shoved and pushed by several men and some women, some with face masks. They struck her phone from her hands and kicked it into the ditch, and surrounded her, kicking and punching her.

Goldy’s sole defender was her companion, a middle-aged man in a blue windbreaker, who tried to stand between her and her attackers, and scrambled to retrieve her phone while she cried, “Stop it! Stop it!”

Police in full riot gear were on hand, but none of them intervened.

Mainstream media were also out in strength, but they too, either ignored the incident or minimized it, as Ali Taghva pointed out in a scathing commentary in Post Millennial.

He compared two videos of the attack, the first tweeted by ThinGrayLine.

The second was tweeted by CTV News reporter Angela MacKenzie:

“When Canadians can openly see that what the media is telling us stands in stark contrast with actual events, we lose faith in them and the institutions that support them,” wrote Taghva.

“I do not agree with Faith Goldy or her views. Do I think she is far right? Yup,” he noted. “But do I think she deserves to be physically attacked?”

Those assaulting Goldy are “not grand defenders of refugees, they are not peaceful protesters – they are fanatics representing some of the most dangerous parts of the left wing,” Taghva wrote.

“If Canada and the mainstream are willing to define the hateful portion of the right as the alt-right, then it’s high time that the same distaste and worry was put towards the dangerous extremists of the left.”

MacKenzie had not responded to a request for comment by LifeSiteNews by deadline.

Border demo all done. Highlight for me: seeing Faith Goldy get scolded by an SQ officer for using her cellphone while driving.

“Yeah, I’m guessing she was trying to call someone who cared about her, or just about the rule of law,” wrote Levant. “Because no-one on the scene did — not the male feminist reporters, not the police who stood there like potted plants.”

He also decried that Montpetit’s tweet was “liked” by “all kinds of journalists, including the CBC's feminist political boss, Rosemary Barton.”

Montpetit had not responded to a request for comment from LifeSiteNews by deadline.

While his report does not mention the violence against Goldy, it explains the far-right is using the illegal border crossings to “grow its membership.”

There have been 7,600 asylum seekers coming into Canada from the United States at illegal entry points so far this year, and 20,000 last year, reports Montpetit.

Indeed, Roxham Road, situated between official border crossings at Colette and Hemingford, has morphed from an obscure rural road to “a veritable refugee camp, with semi-permanent structures,” noted Levant.

It was Goldy who, as a Rebel Media reporter, uncovered the thriving business of moving people illicitly across the board from New York to Quebec via Roxham Road, he pointed out.

As for Goldy, she is “in the process of filing an official complaint, both against the police for their inaction and against the Alt Left attackers,” she told LifeSiteNews in an email.

Evidently undaunted by the incident, she is heading back to Roxham Road for a peaceful protest at 3:00 p.m. on June 3.

“Prime Minister Trudeau erased our southern border without a democratic mandate,” she wrote. “Without a national referendum on such a radical policy shift, Canadians will take their voices to the streets!”

As for her mysterious unflappable protector in the blue windbreaker, “the body man I had acquired for the day was unable to make it at the last minute, so the person with me was not official Security but a sixty-year-old civilian who was travelling for me, mostly for company,” Goldy wrote.

“He is not right wing or an activist but says the attack, police inaction, and lack of media coverage has ‘red pilled’ him,” she added.