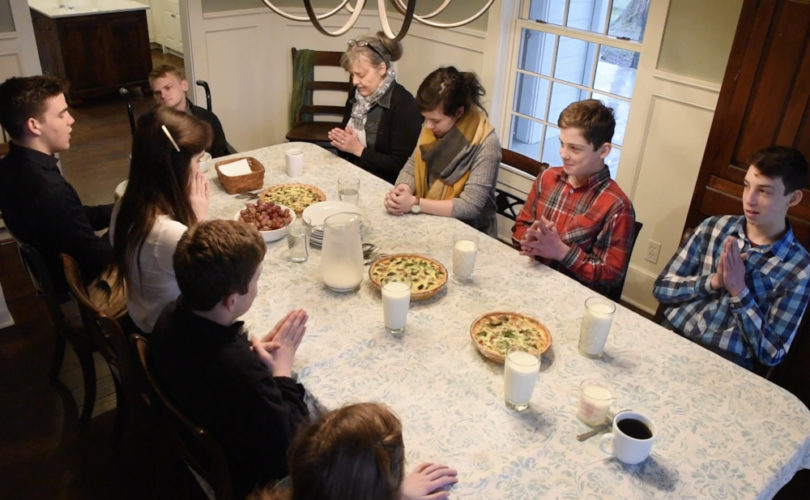 KANSAS CITY, Kansas, March 25, 2021 (LifeSiteNews) — It was Halloween when Jane Bernardel, a homeschooling mom of 11, was hauled away by police for praying in an empty church without a mask.

It’s a Bernardel family tradition to attend Vespers and recitations of the litany of the saints on Halloween, the eve of the great feast of All Saints, to sanctify a day they see as having been secularized. On Halloween 2020, Bernardel and some of her children prayed at Our Lady of Perpetual Help Church in Kansas City, Missouri.

“We went in and got in our pew and it was empty, no one was there. It was really dark,” Bernardel told LifeSiteNews in an exclusive video interview.

The family prayed the rosary and Divine Mercy chaplet for about 30 minutes. Then, Bernardel saw Father Gary Ziuraitis, CSsR, staring at her from the sacristy.

“There was just something about it that was odd,” she recalled. “Then he went to the other side of the altar and came out to tell me to mask.”

Ziuraitis, however, wasn’t wearing a mask himself, Bernardel noted.

“I did not want to mask,” she said, “and my children definitely were not going to mask. None of us were ill, we were all well, we were all very far from anybody in the church, so it seemed more authoritarian [of the priest] … it didn’t make sense to me.”

Bernardel told Ziuraitis that they weren’t going to wear masks.

That’s when he called the police.

‘Last thing on earth I ever, ever expected to see’

Bernardel, who now faces charges for trespassing, has been homeschooling her children long before the coronavirus lockdowns made “virtual school” and regular homeschooling mainstream.

“I homeschooled way before COVID,” she told LifeSite. “I have a 31-year-old son … so we have homeschooled some 20 years.”

“We did it because of where the culture was going,” she explained. “We are out to daily Mass. It was something we started doing for one of my children who is handicapped, but it ended up being something that was deep in us that we needed to do.”

Six of the Bernardel children are adopted and one is severely handicapped.

Bernardel’s daughter, Isabella, arrived at the church just as her mother was being hauled out, handcuffed, by the authorities. She described the moment she saw her mother being arrested: “The first thing, I really just froze.”

“I just remember thinking it was the last thing on earth I ever, ever expected to see, in any situation.”

Police didn’t want Bernardel to genuflect as they arrested her

Bernardel confirmed that Father Ziuraitis was not wearing a mask himself, even after he had asked Bernardel to don one to stay in the church. She told LifeSiteNews, “I just knew I wasn’t going to do it.”

At that point, she could have left, but decided to stay to pray and “face the music,” Hale said.

“I did … I just knew I was going to stay then. I didn’t find out until later how important that was.”

Explaining the importance behind her decision to continue praying and not leave, Bernardel noted that “since that time, many people have come to me saying how they have been persecuted, too.”

“One woman was ostracized from the pulpit during the homily because she didn’t wear a mask. She was in her eighties and she was the only one not wearing a mask and was told to leave. She was very humble woman and left, and was not welcome in the church, and she would bring the Blessed Virgin Mary back with her and pray on the steps outside the church.

Another family in Kansas reached out to Bernardel with their ordeal. Every time they go to Mass or pray in their local church, “they have to be roped off, they’re in a pew by themselves because they refuse to mask. They have to rope this special area off just for them, and their boys had to stop serving.”

In addition to the priest treating her harshly, the police, too, were unrelenting, Bernardel said. “They were definitely thinking I was a really bad person. It started, really, when I just tried to genuflect. They didn’t want me to genuflect so … to other people it looked like I had been combative.”

She added that, once outside, the police “didn’t like that I was asking the children to come.” She said the police were asking her family to go away, making it seem that she was a danger to be around, but “I wanted them [the police] to know who I was and what they’re doing.”

After her arrest, the diocese’s communications office attempted to pass the buck, stating, “The Diocese has no objection to charges being dismissed against the disruptive attendee but that decision would need to be made by the arresting officer.”

The Kansas City police countered, “The decision to drop the charge of trespassing would be between the Church and Municipal Court.”

In the exclusive LifeSiteNews video, Bernardel described receiving “copies of letters stating things about the night or about us that [were] incorrect.” Following repeated falsehoods being leveled against her and her family, Bernardel took to writing a letter to the bishop to try to resolve the situation peaceably.

She, her husband, and two men who had volunteered to join them met with the bishop.

“That was hard to do but we felt it necessary,” she reflected.

At the meeting, it became clear that Bishop James Johnston of the Diocese of Kansas City, was “being safe and keeping everybody safe and keeping his churches open,” and was unwilling to intervene to assist Bernardel in her case. “[The bishop] kept reiterating that ‘I wasn’t there,’ that’s what he would say, ‘I wasn’t there, I can’t make a call, I can’t say anything.’”

“So there was no apology” from the bishop, she added. The most that Johnston offered was that he would not object if charges were dropped.

“Since my first interview in November I am charged with trespassing,” Bernardel explained, adding that during her first meeting with the prosecutor, she was offered a “bargain” that would entail pleading guilty in exchange for a $300 fine and to enroll in diversion classes.

A diversion program is a rehabilitation program in the criminal justice system designed to help offenders overcome the behaviors that led to their original arrest. Bernardel would be required to attend anger management classes to satisfy the plea bargain.

When asked if she would take the offer, Bernardel responded resolutely: “No, and I wasn’t [guilty] and both lawyers know I’m not.”

Which is more important: Masking or Catholic sacramentals like Holy Water?

Bernardel said the experience has awakened her to the reality of the persecution of the faithful flock, and it has encouraged her to prepare to defend the Faith: “We need to be ready at all times to face the music and be ready to stand up for our faith. I think the uncanny thing was it came from the inside, it’s the Church, it feels like the Church is persecuting you.”

“I think that it was just an innate thing that I offended God [by wearing a mask], it felt offensive. Even the bishop mentioned in the meeting that he’s not cracking down ‘on every church in the diocese,’ he won’t release the mandate. He understands that everybody has a right to exercise their conscience,” she said.

“I didn’t know how fervently I felt about it [masking in church] except I was avoiding it. It really was a conscientious, innate thing in me that came forward.”

With a mask on, “I can’t even worship Him face to face; that’s sad,” Bernardel added. “To me, it’s just been twisted, and we are just trying to worship and give Him all the respect that is due Him and the love that is due Him.”

Bernardel went on to lament the impositions in place besides masking across churches in America, where the use of Holy Water “is still not available in most churches.”

“We can’t do what we do without our faith.”