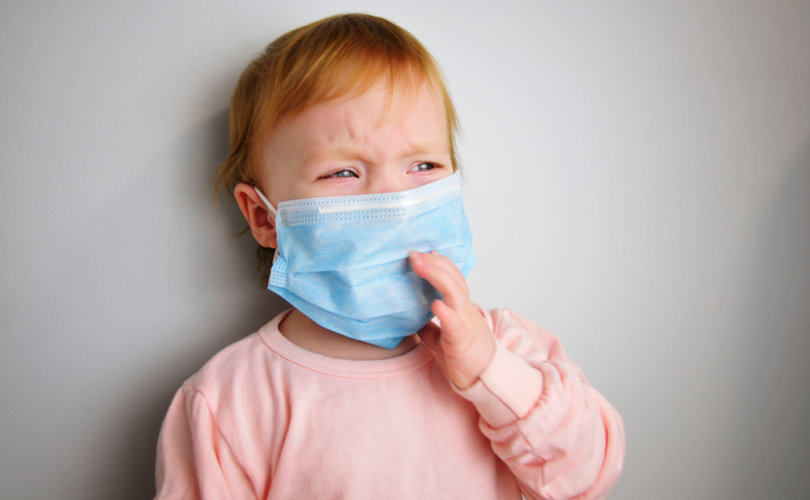 (LifeSiteNews) — With the strike of a gavel, a federal court judge overturned the Biden Administration’s transportation mask mandate, which was about to be extended for two more weeks into May.

“Wearing a mask cleans nothing. At most, it traps virus droplets. But it neither ‘sanitizes’ the person wearing the mask nor ‘sanitizes’ the conveyance,” wrote U.S. District Judge Kathryn Kimball Mizelle in her April 18 ruling.

Mizelle said the Centers for Disease Control and Prevention (CDC) overstepped its authority under the Public Health Services Act, which allows the “inspection, fumigation, disinfection, sanitation, pest extermination, destruction … and other measures” to protect the public.

The Department of Justice announced on Tuesday it will appeal the federal court’s ruling.

The mask mandate had been the ire of the airlines, its employees, and passengers since President Joe Biden imposed it through executive order shortly after taking office. Masks were a factor in over 4,000 unruly passenger complaints, and TSA issued more than $600,000 in fines to passengers for non-compliance.

The order also spawned several lawsuits, including ones by airline pilots, 21 states, and the one before Judge Mizelle by the Health Defense Freedom Fund.

The Monday ruling was a victory for civil liberty, says Chad Savage, M.D., the founder of YourChoice Direct Care, the president of DPC Action, policy advisor to the Heartland Institute, and policy fellow to Docs 4 Patient Care Foundation.

“It is tragic, however, that our public health authorities repeatedly need to be reined in by the courts and that their violations of our liberties are indulged in without consequences by those abusing their power,” said Savage. “Our government should not be in a position of constantly testing the boundaries of how many liberties they can violate and for how long. We need responsible, restrained governance that respects the principles of our founding.”

Citizens for Free Speech (CFFS), a civil liberty action organization, had been fighting travel restrictions since their inception.

“At first, they tried to use science as the basis for these muzzles on public transportation, and when the science didn’t stand up, they switched to full-on authoritarianism. The CDC admitted that cloth masks were useless against coronavirus, and yet they continued to force compliance in a blatant abuse of power,” said Patrick Wood, the executive director of CFFS, in a press release.

CFFS had also fought masks orders in schools and maintained a database of citizen complaints.

Meanwhile, there is new evidence that the masks mandates failed to keep public schools open, as the CDC, school districts, and eventually, the American Academy of Pediatrics had claimed they would.

The media amplified the messaging. “Face coverings are essential to protecting children, keeping schools open and slowing highly contagious coronavirus variant,” wrote Scientific American on August 19, 2021. On November 12, 2021, NPR asked ten health officials and school leaders on November 12 when kids will eventually be allowed to remove their masks. Answers included: “If we can find a safe way to do it,” “January 1, 2022,” “Let’s not even talk about it until the spring,” and “Once younger children have ample chance to get vaccinated.”

The narrative prompted Phil Kerpen of American Commitment, Emily Burns, and Josh Stevenson to see if indeed masks were allowing schools to stay open. “We went in with the question the government never seemed bothered to answer,” said Kerpen.

Using data compiled by Burbio.com., the researchers reviewed school closures and school mask policies at 500 of the nation’s largest school districts during January and February 2022 and published their analysis on Substack on March 9.

“This is not a model or a theory. This is what actually happened,” said Kerpen. “In January and February of this year, mask-mandated school districts had far more school closures than mask-optional. Period. The idea that masking would keep kids in school is now empirically disproven.”

The research did not probe why mask-mandated schools closed more often, but Kerpen says he has a hypothesis: “I think the masks create panic, kind of an edge, and when you get people already on edge and you get into the winter and you have a seasonal increase in cases, what’s next up? Closure.”

The Politics Behind Masks

Given the court ruling and the latest evidence that masks have little effect in accomplishing their stated effect, the public shouldn’t expect masks mandates to go away forever.

“I fear that a lot of the Liberal politicians and so-called public health experts would rather make the same mistakes over again than to admit they were wrong,” said Kerpen.

“I do fear in places with uncontested Democratic control, you’re going to see these things creep back in again. Their political calculation will be different in those areas because they’ll be saying ‘I don’t want my base people who believe in all this stuff to have any reason to question it and as long as we do it every year, they won’t have a different experience to compare it to,” said Kerpen.

Months after mask mandates began to fall out of fashion, they have reappeared at universities, and in the city of Philadelphia.

As for the latest court ruling, the public should take note, says Savage.

“Without pomp or celebration, one of the most unconstitutional periods in our country’s history comes to an end,” he said.  “But we should not soon forget the blithe willingness with which our public health authority assumed powers never granted to them and how many we complicit in this taking. Those who would so brazenly abuse their power should be nowhere near it.”

There should also be accountability, he added.

“When civil liberties are ignored, those doing the violating should not be able to avoid consequence and [be] absolved of personal responsibility .. .”