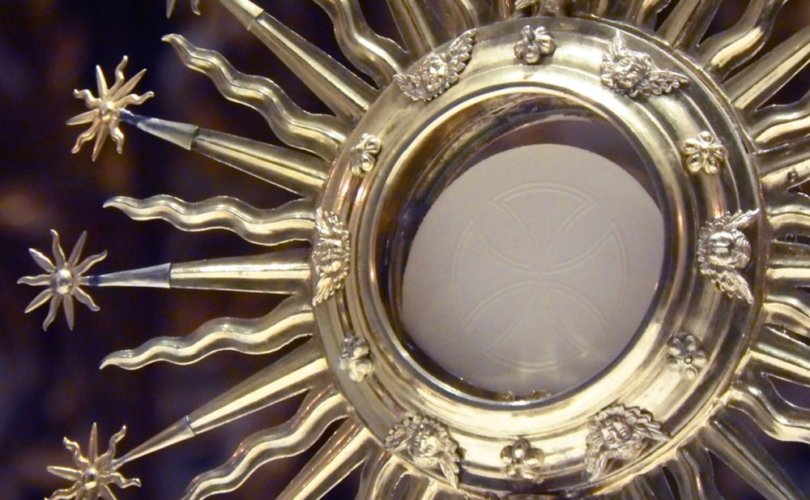 More than 200,000 people joined a Eucharistic Procession into the heart of Budapest during the 52nd International Eucharistic Congress. The Congress took place in Hungary from September 5 to September12.

“I was deeply touched and deeply taken by what happened on Saturday evening,” stated Eduard Habsburg, Hungary’s Ambassador to the Holy See, in an audio commentary he provided to author Dr. Taylor Marshall.

“That evening hundreds of thousands of Hungarians and guests from all over the world descended into the streets of Budapest and walked in silence and in prayer, in singing, with candles, following the Blessed Sacrament through the center of Budapest as it was done for centuries all over the world, but as … has become very rare nowadays.”

The ambassador explained that as the Holy Eucharist passed by, people would kneel down on the street in reverence. Many Hungarians posted pictures and made comments that displayed how touched they were. One Hungarian wrote, “If God is with us, who can be against us?”

“Hungary is under the same threats as many [other] countries: from the threat of secularism, declining numbers of attendance at Church.”

The ambassador predicted that this procession would be the catalyst for the “rebirth of faith … a jumpstart from God” for the people of Hungary.

Although crediting Pope Francis for getting “the entire nation to their feet,” Habsburg explained that the jumper cables were “the power of the Holy Eucharist.

“A whole city has seen what it means to have the Blessed Sacrament on the roads,” he said.

Pope Francis, the first Pope to visit an International Eucharistic Congress since the year 2000, encouraged the participants in his closing homily on September 12 to continue to “make time for adoration.”  At the same time, he seemed to criticise shows of piety and confidence in strength.

“Jesus asks us to purify our religiosity before His cross, before the Eucharist,” the pontiff stated.

“We do well to spend time in adoration before the Eucharist in order to contemplate God’s weakness.”

“Let us make time for adoration, a way of praying too frequently forgotten. Let us allow Jesus the Living Bread to heal us of our self-absorption, open our hearts to self-giving … and inspire us to follow Him wherever He would lead us.”

Prime Minister Viktor Orbán met with Pope Francis, with whom he disagrees on the subject of mass migration of refugees into Europe, and asked him not “to allow Christian Hungary to perish.”

According to Tristan Azbej, Hungary’s State Secretary for the Aid of Persecuted Christians, “the government of Hungary has made a concerted effort to make the country a “Christian Nation” following “Biblical Principles.”

In a recent interview with CBN News, Azbej stated that the Hungarian government is “trying to implement the social teachings of the Christian faith and the Bible in [their] policies.”

In his June 19, 2021 speech marking 30 years of freedom in Hungary, Orbán recalled the historical moments in which Hungarians fought against communism. Addressing the nation, he said: “We are … Europe’s last surviving freedom fighters. Europe’s history did not simply change: we changed it. We know that now when the European Union is in trouble, it will not mend its ways, we must transform it, and we must lead it back to the right path – the path that was once successful.”

“It was quite extraordinary, and it gave me lots of hope for the future of the Church.”