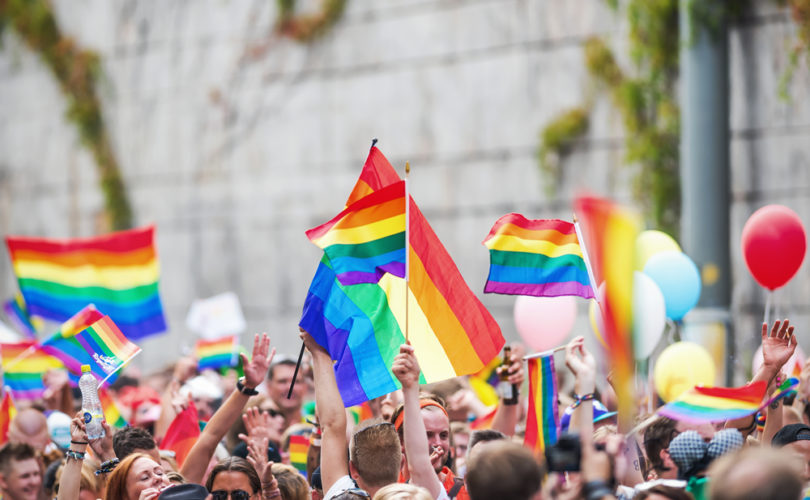 BOSTON, Massachusetts, October 9, 2015 (LifeSiteNews) – Politicians in Massachusetts held a hearing Tuesday to make it illegal to keep men from using women's toilets and showers, and women from using men's urinals and locker rooms.

Both the Massachusetts Senate and House are reviewing bills that would make it criminal “discrimination” to separate access to public facilities by biological gender, and instead enforce the use of facilities by self-designated “gender identity.”

Massachusetts passed a law in 2011 making transgenders a “protected class” from job or housing discrimination. These “Bathroom Bills” are considered the next step in transgender recognition.

U.S. Rep. Joe Kennedy III spoke out Tuesday in support of the transgender law. He invited a 14-year-old girl to testify to the Judiciary Committee. She explained that when she announced that she wanted to be a boy, the Christa McAuliffe Charter School in Framingham “asked me to use restrooms that were segregated from the rest of my classmates[.] … Separate but equal makes me feel like a second-class citizen.”

Attorney General Maura Healey, an open homosexual, supported the bill as well. “After segregation, people were uncomfortable, sharing pools and sharing drinking fountains,” Healey said. “Discomfort is not a reason to perpetuate discrimination.”

Republicans expressed concern for all the other people trying to use public facilities. “Let’s talk about these young women who do feel uncomfortable with that,” Rep. Jim Lyons offered. “What protections are we going to put in place for them?”

Brian Camenker of MassResistance explained that the bills meant that, “if a business owner, employer, or even another patron of any bar, restaurant, hotel, resort, store, health club, theater, or any other 'public accommodation' simply 'makes a distinction' between a normal person and a cross-dresser/transgender that is a violation of the law.”

Camenker notes that the bills levy huge fines and up to a year in jail for violators, as well as open the door to potentially million-dollar civil suits. The bills assign enforcement to the radical leftist Massachusetts Commission against Discrimination, whose members are appointed, not elected, and remain unaccountable to citizens.

Significantly, the bills allow no religious exemption for Christian businesses.

Sponsor of the senate version Sen. Sonia Chang-Diaz, stated that she finds it “grotesque and insulting” to hear people say they are trying to protect women and children.

Suffolk District Attorney Dan Conley said the bills are a “matter of basic human dignity and respect.” Gov. Charlie Baker was uncommitted, saying he plans to look at the bills.