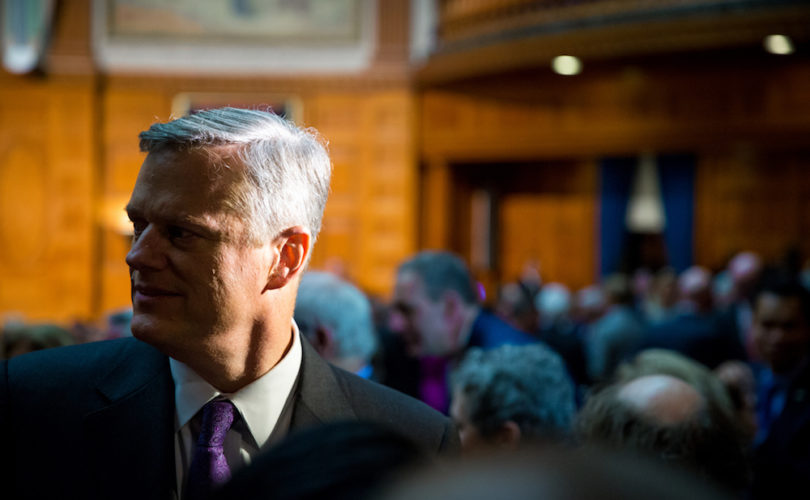 However, pro-life and pro-family activists inside the party are pushing back, saying the move will split an already outnumbered party. There is only one statewide seat held by a Republican – Governor Charlie Baker's – and the legislature is more than 80 percent Democratic.

According to Newburyport News, Baker believes that the state committee should prioritize budgets and economics and completely avoid marriage and abortion. He has endorsed 74 candidates running for the 80-member Republican State Committee, including 16 who are challenging incumbents.

Baker is well-known for his positions favoring abortion and a redefinition of marriage. In 2014, he and other moderate Republicans aggressively opposed a socially conservative platform adopted by the state GOP. That platform said abortion was “tragic” and pushed for state policies that “will assist a woman during a crisis pregnancy.”

Newburyport News notes that Baker and party chairwoman Kirsten Hughes did not align themselves with the state platform – and they weren't alone. “We need to have a party that is inclusive if we expect to grow,” said gay Republican and former Senate Minority Leader Richard Tisei, who was Baker's running mate in a failed gubernatorial bid in 2010. “And a lot of these people have set us back over the years, rather than moving us forward.”

“The Baker brand of Republicanism is clearly where the party should be headed in the future,” he said.

“[Baker's] trying to reshape the Republican Party in his image – and make it more liberal,” said Ted Trip, chairman of the Merrimack Valley Tea Party. “I don't think it's good for the party. We're only 11 percent of the electorate. Why exclude more people?”

Democrats outnumber Republicans more than three to one in the state, and over half of registered voters in the state are officially independent.

“The battle lines are simple,” stated Lawrence Brennan – a conservative running for the Committee – on his website. “Baker has endorsed a slate of candidates in an attempt to gain absolute control of the party apparatus and to drive out any conservatives on the existing state committee.”