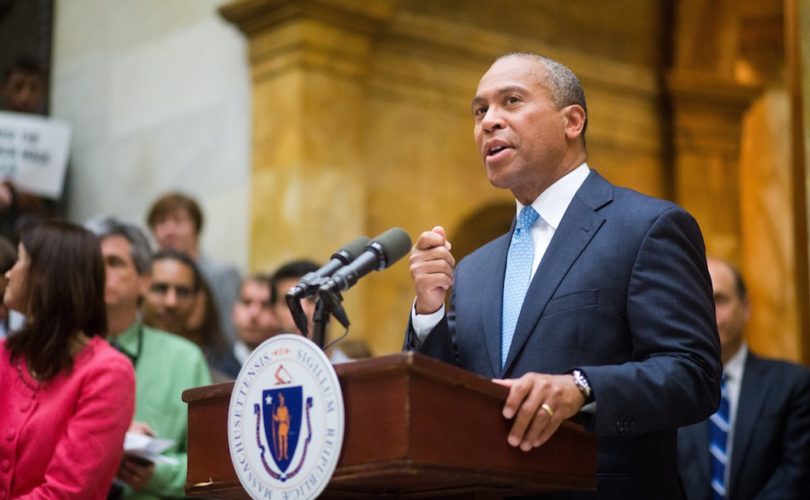 BOSTON, MA – In the wake of seeing their state law prohibiting pro-life speech within 35 feet of an abortion facility struck down by the Supreme Court, Massachusetts political leaders and representatives of the abortion industry vowed to strike back with new legislation to keep sidewalk counselors away from women considering an abortion.

Gov. Deval Patrick and Attorney General Martha Coakley were joined by the state's Planned Parenthood and NARAL spokesmen to say they intend to pass new laws to restrict pro-life speech by the end of the month.

Gov. Patrick said he wished to “assure the citizens of the commonwealth that we will react, and we will react constructively and quickly” to the Supreme Court's unanimous decision striking down the state's bubble zone law, last Thursday's McCullen v. Coakley ruling. “We hope, very much,” he said, to have “a fix on my desk before the session ends this summer,” according to MassLive.com.

“The Supreme Court may not have liked our buffer zone, but they did not lessen our commitment to protecting women’s access to reproductive healthcare in this Commonwealth,” Coakley added at the press conference.

The leaders, both Democrats, had not yet decided on the exact legislation to be introduced. They considered returning to a “floating” bubble zone, similar to the one that preceded its 35-foot, fixed area outside abortion facilities' entrances and driveways. A statewide law modeled on the federal Freedom of Access to Clinic Entrances (FACE) Act, signed by President Bill Clinton in 1994, was also suggested.

Coakley added they had considered implementing a law, which was specifically suggested by Chief Justice John Roberts' ruling, based on that of New York State, barring “harassment” of women.

Martha “Marty” Walz, who is now the president of the Planned Parenthood League of Massachusetts and who helped introduce the bill as a state legislator in 2007, said the Supreme Court's decision has already had a “negative effect” on her businesses, claiming at least one protester was “back in our doorway Saturday morning,” screaming and terrifying pregnant women as they entered.

But the state's pro-life leaders dismiss the story as patently ridiculous.

“Since the end of the buffer zones last Thursday, the sidewalks in front of Massachusetts abortion facilities have been the object of constant police vigilance, extensive media coverage, and a more intensive presence by clinic escorts. The federal FACE Act, prohibiting clinic blockages, remains in force,” said Catholic Action League Executive Director C. J. Doyle. “Curiously, despite Walz's charges, no arrests have been made, and no credible evidence has been presented to substantiate her claims.”

“Planned Parenthood has a financial interest in suppressing pro-life speech, has a history of demonizing pro-lifers, and has an entirely utilitarian view of the truth. Their method is to make sweeping assertions, and to expect all such assertions to be taken at face value by a compliant media and political class,” he said. He hoped “the renewed debate on civil liberty in front of abortion clinics” will bring “closer scrutiny of their claims.”

Whatever bill is considered, it is likely to sail through the legislative branch. Senate President Therese Murray pledged her support for the effort, saying in a statement that she is dedicated to “finding a legislative solution that will protect the women of Massachusetts and restore access to care.”