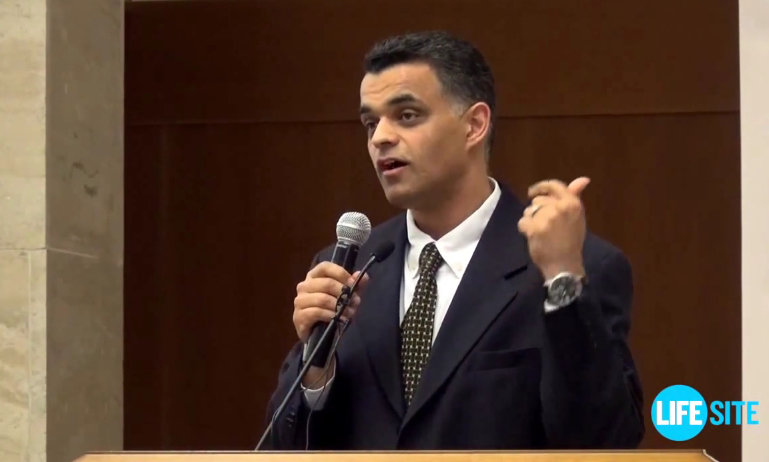 ROME, May 20, 2015 (LifeSiteNews) – Speaking at the Rome Life Forum earlier this month before a crowd of 300, including Cardinals Raymond Burke and George Pell, LifeSiteNews co-founder John-Henry Westen lamented the communications failures at the Vatican that he said have led to widespread and serious confusion about the Church's teachings.

Pointing to the chaos in the wake of last year's Extraordinary Synod on the Family, and the ubiquitous misinterpretations of some of Pope Francis' remarks, Westen said, “There is a lack of clarity and communications even from the offices here that require that clarification, so that we can understand what is happening.”

For decades now, he continued, pro-life and pro-family activists have always felt that they could rely on the Vatican to provide clarity and support, even when they might have lacked support in their own parishes and dioceses. But many have been left feeling uncertain in the wake of the obscure statements and signals in recent years.

“We have sometimes been shocked by things that we have heard,” he said. He highlighted the pope’s statement in an interview shortly after his election, in which the pontiff said that Catholics should not speak about the issues of abortion, contraception, and homosexuality “all the time.”

The response of many pro-life leaders to that statement, Westen said, was, “Where is this happening?” “Because most of the countries in the West have had a virtual silence from the pulpits on these issues. And that virtual silence is accompanied by a shouting from every secular pulpit, magazine, book and screen of the gospel – I should say of the anti-gospel – of hedonism and sexual aberration called liberation.”

The full text of Westen's talk is available here.

Westen also pointed to the meeting last year between Pope Francis and Italy’s best-known pro-homosexual priest as a case where an opportunity to send a powerful message of mercy instead spread confusion, because of the lack of clarity.

Westen quoted Christ’s statement from Luke 5, after the Pharisees criticized him for eating with sinners, as an example of such clarity. Christ had said: “I did not come for the just but for sinners, to call them to repentance.”

“Things have been misinterpreted by the media everywhere,” Westen continued, most famously Pope Francis’ statement, “Who am I to judge?”

“Most demonstrations in favor of gay 'marriage' have [this statement on posters], it is on T-shirts. It needs to be clarified. The media doesn’t help at all because the media is on the other side and uses the Pope’s words to bash Catholic activists in America and all over the West. The clarity we need is so important and still needs to be done.”

Westen compared the confusion coming from the Synod of Bishops on the Family on matters of divorce and homosexuality to the uncertainty in the years preceding the publication of Humanae Vitae.

He noted that the long-standing confusion over contraception ultimately led to the vast majority of Catholic women practicing contraception, even after Humanae Vitae was promulgated. Today, the Synod’s confusions, as well as other unclarified statements, is contributing to a majority of Catholics in the West supporting same-sex “marriage,” he said.

Westen concluded by begging the pope and bishops of the Church to preach the truth “in season and out of season” for the sake of his eight children and those of the leaders present.  He asked them to share the “treasures of the church” — it’s crucial teachings on life and family — despite what the world thinks of them for doing so.

Westen’s address was greeted with a standing ovation by attendees of the Rome Life Forum. Responding to the address, John Smeaton, who co-founded Voice of the Family with Westen last year, noted that the remarks were an accurate expression of the sentiments of the pro-life and pro-family leaders present.