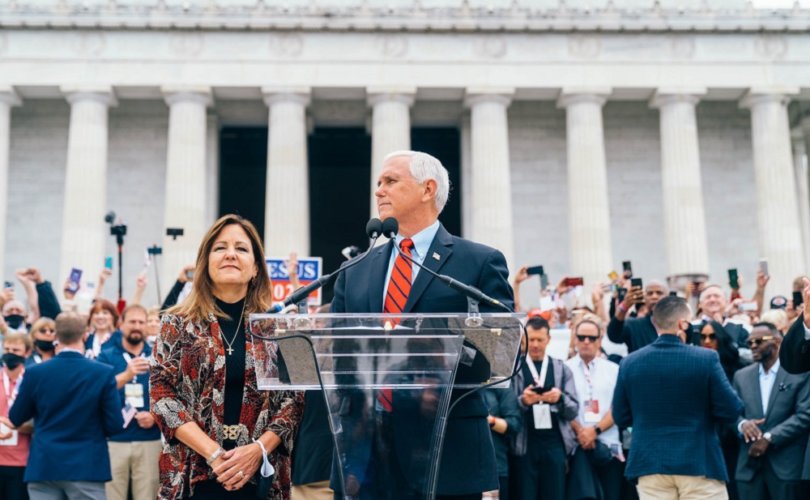 September 28, 2020 (LifeSiteNews) — Tens of thousands of people poured into the nation’s capital from all corners of the country on Saturday to join evangelist Franklin Graham and other Christian leaders to pray and repent on behalf of the nation and ask God to heal divisions and strife.

Vice President Mike Pence with his wife, Karen, by his side made a surprise appearance, urging the crowd of 50,000 to pray for those who serve in every branch of the government, especially those in law enforcement and the military:

And when you pray, pray with confidence.  As we stand today on an ancient promise that Americans have claimed throughout our history, that if His people, who are called by His Name, will humble themselves and pray, and turn, He’ll do like He’s always done —through much more challenging times in the life of this nation— He’ll hear from heaven, and heal this land; This one nation, under God, indivisible, with liberty and justice for all.

Vice President @Mike_Pence: “So on the President's behalf, I want to say thank you for your prayers…and so we want to urge you on. Pray for all of those with public responsibilities.”#PrayerMarch2020 pic.twitter.com/5DW5Hbzphp

“Today, at this Washington Prayer March, you continue a great American tradition,” said the vice president. “Since the founding of our nation the American people and our leaders have gone to prayer in challenging times.”

“George Washington prayed for the leaders and the people of our states, what he called ‘an earnest prayer,’ that God would hold them and our states in His holy protection,” recounted Pence.

“Abraham Lincoln, before whose monument we stand today, said during his time in the White House, ‘I have been driven many times to my knees by the overwhelming conviction that I had nowhere else to go.’ And President Donald Trump has observed many times that America is a nation of believers, and you prove that again today,” he added.

Bishop Harry Jackson of The Reconciled Church suggested that the nation is going through a healing process.

Franklin Graham, CEO of the Billy Graham Evangelistic Association and Samaritan’s Purse and host of the Prayer March, sent out a tweet showing the vast size of the crowd, quoting Jesus’s words: “For where two or three are gathered together in My name, I am there in the midst of them” (Matthew 18:20).

“For where two or three are gathered together in My name, I am there in the midst of them.” (Matthew 18:20) #PrayerMarch2020 #WashingtonDC pic.twitter.com/PH1npj86pS

Graham kept his words to a minimum.

“Our Father and our God, we come to say thank you. Father, our country is in trouble. We need your help,” said Graham. “I think we’re at a crucial point in this country. We’re that close to losing our nation.”

As the march began, the crowd stretched as far as the eye could see: packed tightly in the huge plaza in front of the Lincoln Memorial, cascading down the broad steps to the nearly half-mile-long Reflecting Pool, and extending beyond the World War II Memorial toward the Washington Monument.

The event presented a striking contrast to most large Washington, D.C. gatherings,  normally bloated with endless political speeches. The clear focus of the Prayer March  — which began at the Lincoln Memorial and solemnly made its way across the length of the National Mall to the base of Capitol Hill — was prayer according to 2 Chronicles 7:14:

If my people, which are called by my name, shall humble themselves, and pray, and seek my face, and turn from their wicked ways; then will I hear from heaven, and will forgive their sin, and will heal their land.

The Marchers stopped at several key points along the way to the Capitol to offer up specific intentions:

“We all need to come in unity in Christ Jesus to pray for our nation,” Maria, who traveled from Cleveland, Ohio to be at the event, told LifeSiteNews.

“Our country is in desperate need of God’s help,” said Susan, from Philadelphia, who suggested that God could forgive and save the nation in the same way he had forgiven and saved her after having had abortions.

She said she now fights for the life of every unborn baby.

“He forgave me,” declared Susan.  “He can forgive any sin.”