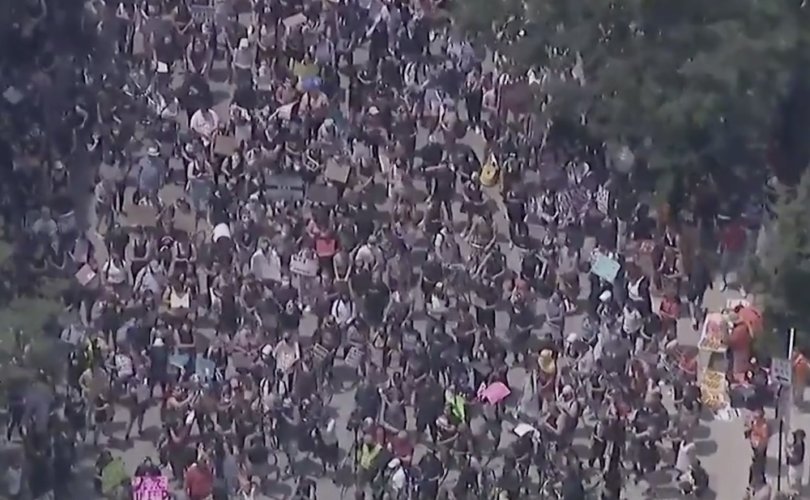 CHICAGO, July 1, 2020 (LifeSiteNews) – With Chicago’s annual LGBT “pride” parade canceled in the name of protecting public health against COVID-19, LGBT activists organized a substitute protest this weekend in the neighborhood of Boystown, producing massive throngs of people who were at least as tightly packed together as the parade would have been anyway.

Thousands of people gathered for the “Reclaim Pride” event, ABC 7 Chicago reports, which organizers say was meant to be more of a protest in contrast to the party-like atmosphere of previous parades.

“This march is basically us going back to the roots of the original reason why Pride existed in the first place and basically highlighting that Black and Brown people in Boystown — and in general in society — aren’t taken care of the same way that White people are taken care of,” organizer Ashabi Owagboriaye told WTTW. “White queers are prioritized, even though Black and Brown music is what people use to pull in crowds, and with that being used, Black and Brown bodies are usually dismissed and excluded.”

As has been the case across the United States, the LGBT cause once again converged with the Black Lives Matter (BLM) movement, with Owagboriaye adding that defunding the Chicago Police Department was “obviously” among the group’s aims.

While organizers say attendees were required to wear facemasks, crowd sizes at the Reclaim Pride event still contrasted sharply with the warnings Americans have been inundated with for months to stay home unless absolutely necessary, so as not to catch or spread the novel coronavirus.

The mainstream media, and even left-wing “health experts,” have been much more tolerant of mass public gatherings for causes they support, such as BLM and LGBT “pride,” than they have for President Donald Trump’s trademark campaign rallies or even small in-person gatherings such as religious worship.

Despite Owagboriaye’s claim that “Black and Brown trans women” are being “killed and brutalized” to such a degree that they require “safe spaces for queers [to] exist,” federal crime statistics do not support the LGBT lobby’s talking point that America is currently experiencing an “epidemic” of anti-transgender violence.