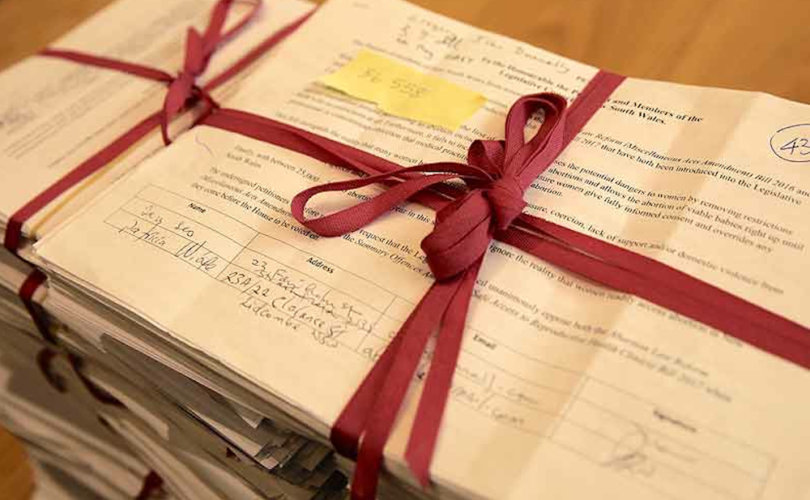 A petition with more than 56,000 names opposing a New South Wales abortion bill was delivered to parliament.

SYDNEY, Australia, May 10, 2017 (LifeSiteNews) — The Legislative Council (upper house) of the New South Wales parliament was brought to a shocked silence as one of the largest official parliamentary petitions in its history was tabled by the Hon. Greg Donnelly MLC.

The petition with 56,559 signatures opposed the Abortion Law Reform (Miscellaneous Acts Amendment) Bill 2016. The Bill aims to “repeal offenses relating to abortion, to specify a ground of unsatisfactory professional conduct by a medical practitioner with respect to abortion, and to establish exclusion zones in order to prohibit certain behavior near premises at which abortions are provided.”

Having announced the number of signatories as part of the tabling process, Donnelly rose to read the content of the petition to the parliament. MPs looked away from their phones to pay attention and immediately noticed two of Donnelly’s staff bringing in large document boxes containing the petition sheets. An audible gasp filled the chamber.

Pro-lifers in the parliamentary gallery to witness the petition being tabled described it as “truly a 'William Wilberforce' moment” as the whole room was silent while Donnelly read out the petition.

The petition was the culmination of a two-week effort by the pro-life community. It contained signatures of residents from Sydney and throughout regional areas in New South Wales.

“It was much bigger than expected. I never thought we would get that many. We were really hoping to get 10,000” said petition coordinator Rebecca Gosper from Youth For Life.

The author of the Bill, Greens MP Mehreen Faruqi‏, was not present when the pro-life petition was tabled. She has her own official petition in favor of the Bill, running since November 2015, which is yet to be presented to the parliament. An unofficial online petition sits at 2,028 signatures.

Gosper, a university student who studies Human Sciences, combined with a few friends and created a page on Facebook for the pro-life campaign. What she expected to involve a dozen churches quickly took on an organic life of its own and evolved into 160 churches, sporting, and general community groups getting involved.

The campaign was not limited to the churches, as pro-abortion activists like to claim. “People were really receptive in that regard and were keen to do something practical to make a difference in New South Wales” Gosper said. Even shop owners in country towns became involved.

A mere 48 hours before the first church visits were scheduled, Gosper found herself flooded with messages from volunteers offering to collect signatures from various groups. She ended up working 18 straight hours just to stay on top of the messages and coordinate the flood of volunteers.

After the first weekend, she estimated that there would be a healthy 15,000 to 20,000 signatures. As they were counting, the petition forms kept arriving and the estimate was revised to between 30,000 and 40,000. Then, on Monday with just 48 hours to go, she received a text message from a volunteer that they had 49,000 signatures. Also, there were more that needed to be counted in addition to the petition forms waiting at Parliament House that arrived at network drop-off points.

Gosper says the two-week time frame was motivating for people and the short length didn’t turn out to be an issue. “It was amazing to see how well people responded when they were given the chance,” she said.

Faruqi‏’s Bill looks like it will have an uphill battle to pass the upper house before moving through to the lower house of parliament. LifeSiteNews has learned that even pro-abortion MPs are planning to vote against the Bill due to its extreme nature, similar to what was attempted with the Pyne bills in Queensland. It is also understood that Liberal party leaders are planning to vote against the bill to prevent it from making it to the lower house and becoming an issue in the lead-up to the next election.

Faruqi‏’s office was contacted for comment but did not provide a response. The bill is scheduled to be debated Thursday.