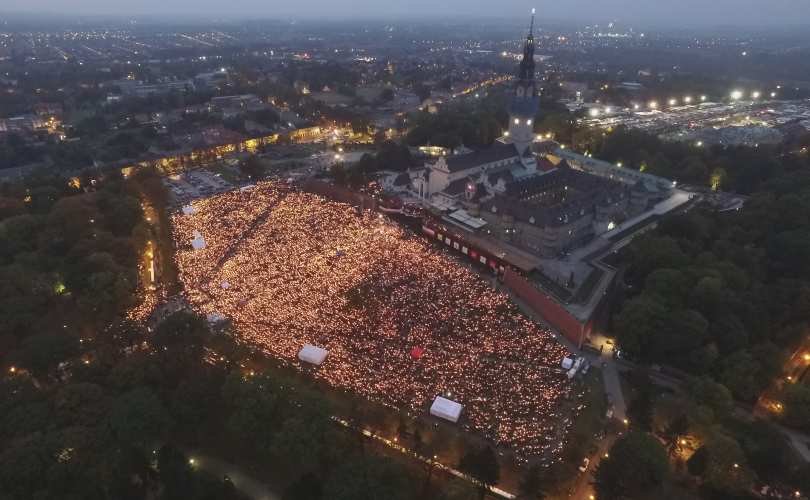 WARSAW, Poland, October 9, 2017 (LifeSiteNews) — More than a million Polish Catholics encircled their country with prayer Saturday, imploring Our Lady’s intervention to save Poland and the world.

As Catholics lined the country’s 2,000-mile border for the “Rosary at the Borders,” progressives and compatible media deemed the national prayer gathering “controversial,” xenophobic, Islamophobic, or “not” representative of the Catholic Church.

Rafał Pankowski, head of the Warsaw multicultural understanding advocacy group Never Again, told the Associated Press, “The whole concept of doing it on the borders reinforces the ethno-religious, xenophobic model of national identity.”

Krzysztof Luft, a former member of Poland’s largest opposition party, the liberal Civic Platform, tweeted, “Ridiculing Christianity on mass scale. They treat religion as a tool for keeping the backwardness in Polish backwater.”

“Rosary to the Borders” was organized by lay Catholics and sanctioned by Church leaders in Poland, with some 320 churches from 22 dioceses participating in roughly 4,000 locations along Poland’s border with Germany, the Czech Republic, Slovakia, Ukraine, Belarus, Lithuania, Russia and the Baltic Sea.

More than 90 percent of Poland’s 38 million citizens are Roman Catholic.

The Catholic prime minister of Poland endorsed the rosary event as well. Beata Szydlo tweeted, “I greet all the participants.”

Father Pawel Rytel-Andrianik, a spokesman for the Polish Bishops’ Conference, said it was the second largest prayer event in Europe after the 2016 World Youth Day. The New York Times reported, however, that final participation numbers were still being tabulated.

Airport chapels, considered gateways to the country, were prayer sites for Catholics as well, the AP said, and Polish soldiers stationed in Afghanistan prayed at Bagram Airfield there.

The prayer positions for the rosary event also included fishing boats at sea as well as kayaks and sailboats forming chains on Polish rivers, according to a report from Agence France-Presse.

“During the prayer, I was at the Chopin airport in Warsaw,” Father Rytel-Andrianik said, “and there were so many people that they were pouring out of the chapel.”

“This was an initiative started by lay people, which makes it even more extraordinary,” he continued. “Millions of people prayed the rosary together. This exceeded the boldest expectations of the organizers.”

Churches taking part kicked the prayer event off with a talk and celebration of Mass before Catholics headed to the border to pray the rosary.

The “Rosary at the Borders” took significance from the Our Lady of Fatima apparitions, scheduled on the first Saturday of the month during the 100th anniversary year of Our Lady’s appearance to the three shepherd children in Fatima, Portugal.

Poland’s national Catholic prayer event also coincided with the feast of the Feast of Our Lady of the Rosary on the October 7 anniversary of the 1571 naval victory of the Holy League Battle over the Ottoman Empire navy at the Battle of Lepanto.

The rosary is closely tied to the Lepanto victory, due to Pope Saint Pius V’s call for the faithful to pray the rosary for victory.

Some participants’ comments about Europe keeping its Christian roots or stemming the tide of Islam were framed in the media to paint the “Rosary to the Borders” as nationalistic or “Fears of Islam.”

“Let’s pray for other nations of Europe and the world to understand that we need to return to the Christian roots of European culture if we want Europe to remain Europe,” Krakow Archbishop Marek Jedraszewski said at Mass on Saturday.

“It’s a really serious thing for us,” Basia Sibinska told AP. “We want to pray for peace, we want to pray for our safety. Of course, everyone comes here with a different motivation. But the most important thing is to create something like a circle of a prayer alongside the entire border, intense and passionate.”

Poland and Hungary have refused to take migrants under a quota system established by the European Union, causing controversy and threatening the two countries’ membership in the EU.

Concerns over the secularization in Europe, however, exist independent of the current migration crisis and its various implications.

The Times report said of the rosary prayer event that “Polish Catholics clutching rosary beads” had gathered for “for a mass demonstration” and called Poland “a nation moving increasingly to the right.”

Villanova University theologian Massimo Faggioli used Twitter to criticize what he termed using the rosary from “anti-immigrant use.”

Organizers had told LifeSiteNews the goal of the Rosary to the Border event was to follow Our Lady’s call at Fatima to pray the rosary for the rescue of the world.

“The Rosary to the Borders is not a crusade because we don’t want to fight with anyone,” said Maciej Bodasiński. “It is a giant commotion for, not against, something. We firmly follow her command, and we will pray at the borders of our country, going out in prayer and witness to the whole world, so that the Mercy of God is not confined to any border.”

Father Alexander Lucie-Smith, moral theologian and consulting editor for the Catholic Herald, said in a blog post that praying the rosary is not controversial, and it is our best weapon against evil.

Father Lucie-Smith noted that Poland has a different history that other European nations such as Britain, having been “wiped off the map on several occasions” in recent history.

“If the Poles seem more attached to national sovereignty than most, who can blame them?” he asked. “Their sovereignty has been much disputed. Moreover, the question of Polish nationhood is deeply connected to the Catholic faith. Both in matters of ethnicity and religion, the Poles have been steadfast in resisting Russification. Can you blame them?”

He also said the Poles are entitled to make their own choices in the matter of admitting migrants, and to pray for the salvation of Poland and the world was “admirable. The Polish example should spur others to do the same.”

Regarding the Battle of Lepanto connection, Father Lucie-Smith said marking the anniversary does not denote negativity toward another country, but it celebrates the liberation of those who were subjected to the despotic regime, including Christian galley slaves, making this something to celebrate.

He pointed out as well how praying for victory in war “has long been the Christian way” whether at Lepanto, during World War II, as well as up to and including the Nigerian bishops urging people today to pray the rosary in the face of Boko Haram, “which is completely in keeping with Catholic tradition.”

“Controversial? I don’t think so,” Father Lucie-Smith wrote. “Catholics have been doing these things for centuries.”

“Let’s hope we continue doing them for centuries to come,” he said. “As the website of the organizers of the Polish event reminds us, “the rosary is a powerful weapon against evil.” Let’s keep on using it!”