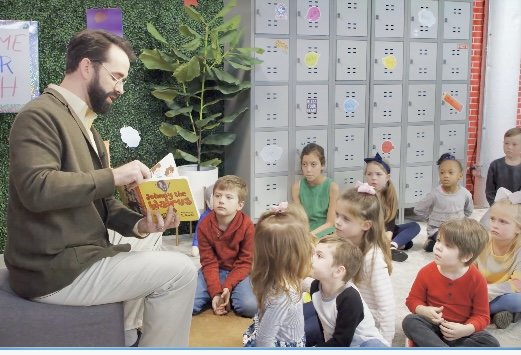 “Johnny the Walrus,” available for purchase, is the first children’s book by Walsh, a prolific critic of feminism, abortion and transgenderism.

“Johnny is a little boy with a big imagination. One day he pretends to be a big scary dinosaur, the next day he’s a knight in shining armor or a playful puppy,” the book description says. “But when the internet people find out Johnny likes to make-believe, he’s forced to make a decision between the little boy he is and the things he pretends to be — and he’s not allowed to change his mind.”

Walsh, known for his snarky activism, such as briefly claiming Virginia residency so he could speak at a Loudoun County School Board meeting, dressed up in a cardigan for a Tuesday night interview with Tucker Carlson.

Johnny is a creative boy who pretends to be a walrus. His confused mommy takes his fantasy seriously and tries to raise him accordingly. Get your copy here: https://t.co/kCEyJ1zdx4 pic.twitter.com/rzCpab1m8R

“This is ‘Johnny the Walrus,’ I have embraced my true calling as a children’s author, hence the cardigan,” Walsh told the Fox News host.

“It’s all about a child who is very imaginative, he likes to pretend to be different things,” such as a walrus, Walsh said.

He said Johnny’s “progressive” mother is very “confused” and tries to “raise her child as a walrus, as a sort of transwalrus, respecting his self-identity,” Walsh said.

The book includes considering a “medical transition” into a walrus for young Johnny.

The story will also inform parents about the dangers of affirming a child’s identity, Walsh said. “Throughout the story she does eventually start to learn that just because your child is pretending to be something doesn’t mean that he actually is that thing.”

“You might also draw other comparisons,” Walsh said snarkily, “maybe like, if a young boy says that he is a girl doesn’t mean he actually is a girl.”

“Biology is not malleable,” the Daily Wire host said, “it’s an objective reality.”

“It can lead to terrible things” when people affirm someone’s made-up identity.

The book has already sold out and new copies won’t go out until 2022.

The conservative commentator said the success of the book shows that many people are tired of LGBT propaganda.

“The success of the book proves that people are tired of the children’s book market being dominated by left wing propaganda,” Walsh said in  The Daily Wire.

“There are dozens of children’s books brainwashing kids into the gender identity cult where they are taught that identity is malleable and biology is meaningless,” Walsh said. “This book is meant to be an antidote to that madness.”

Though, he posited, there could be another motivation behind the success of the book.

“[P]erhaps that there is a mostly untapped interest in walruses.”