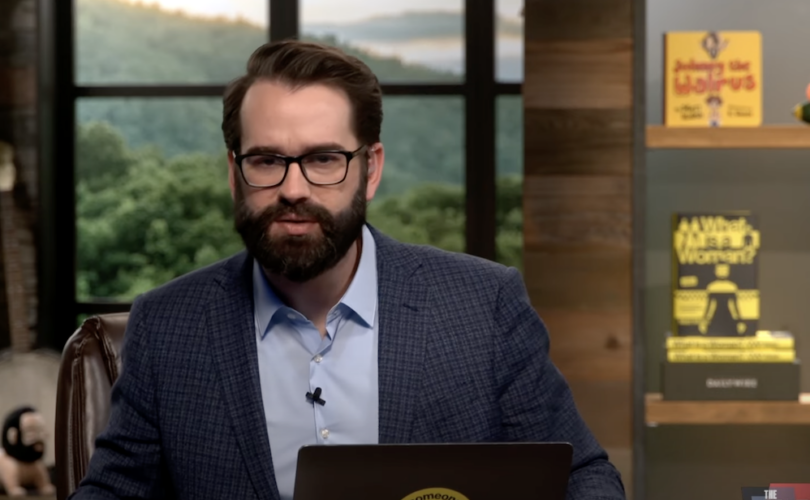 (LifeSiteNews) — Daily Wire host Matt Walsh slammed Republicans supporting Democrats’ same-sex “marriage” bill, saying that they “should be exiled from the party” if they vote for it.

The Senate will vote today at 3:15 p.m. EST on the “Respect for Marriage Act” (RFMA), which would codify the redefinition of marriage into federal law and pose grave threats to religious freedom.

A group of Republican and Democratic senators backing the bill announced changes to address religious liberty concerns, but the new language does virtually nothing to protect Christian institutions, as LifeSiteNews reported. The bill already passed the House with unexpectedly high Republican support this summer.

Matt Walsh called the proposed changes to the Respect for Marriage Act “a trojan horse” and noted that just a decade ago the bill would have been “too far-left,” even for Democrats.

“These are Republicans who are signing onto something that only ten years ago would have been too radically left for even the farthest left people in the Democrat Party,” he said. “It would be too far-left for the Democrats, and now you’ve got supposedly conservative Republicans signing onto it.”

“Any Republican who would sign onto that should be exiled from the party,” he said. “That’s what should happen.”

Walsh stressed that marriage is the “fundamental institution” of civilization and suggested that Republicans would likely capitulate on other issues if they abandon traditional marriage.

“So, you give up on that and say we don’t need to protect that anymore and then what, where are you drawing the line after that?” he asked. “You’re going to erase that line and redraw it where exactly?”

“You cannot jump on board with the redefinition of marriage and then think that you’re going to hold the line on any other issue.”

“This is the Republican Party for you,” he continued. “And it’s no surprise then that they lost in the midterms, or at least vastly underperformed,” he said, adding that national Republicans “have no message.”

At least four Republican senators, including Sens. Susan Collins of Maine, Rob Portman of Ohio, Thom Tillis of North Carolina, and Lisa Murkowski of Alaska, have signaled that they will likely vote for the Respect for Marriage Act.

Ben Shapiro: Republicans who vote for same-sex ‘marriage’ ‘should not be in the Republican Party’

Walsh’s comment echo those of other prominent conservatives, including Ben Shapiro, who said Tuesday that Republicans who vote in favor of the Respect for Marriage Act “should not be in the Republican Party.”

“Because if the fundamental basis for human society is male-female-child, and if you think that by passing a law you can change that reality, you do not belong in government,” he declared.

Dr. Albert Mohler, president of the Southern Baptist Theological Seminary, made similar comments this week, urging conservatives to hold accountable any Republican senators who vote for the Respect for Marriage Act.

“If indeed there are ten Republicans who will vote for this legislation in the United States Senate, we need to know exactly who they are. We need to take their names,” he said. “And when they come back up for reelection, we need to remember this. Because if they will defy creation order in this sense, what would they not defy?”

Polling shows that the Republican base soundly rejects the Respect for Marriage Act, and that passing it could lead to a significant backlash for the Republican Party.

A recent poll found that more than 57 percent of Republican voters oppose national legislation to codify same-sex “marriage,” including 41 percent who strongly oppose it. Just 30 percent of GOP voters support it, and only 11 percent strongly support it.