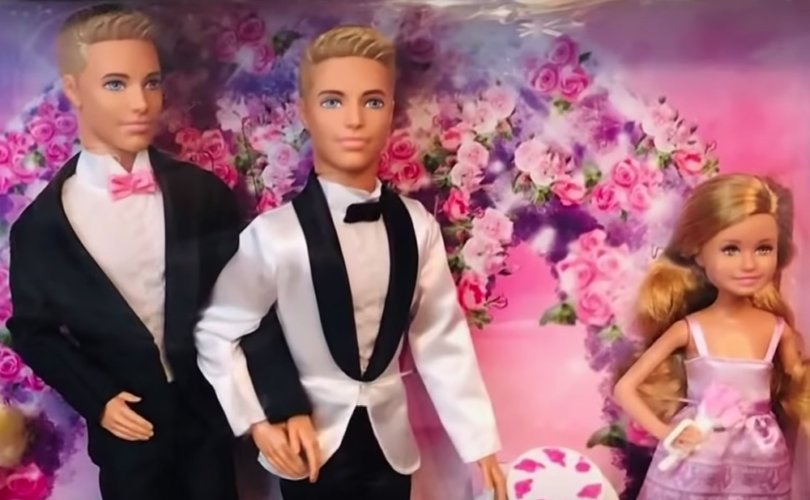 Matt Jacobi and Nick Caprio are a homosexual couple in Arizona that plans to get “married” next May. In comments on Instagram and to ABC 15, they explain that they wanted to get a special birthday present for Jacobi’s 8-year-old niece, who will be a flower girl at their “wedding.” Jacobi is also an E! reality TV personality and contributor to Instinct Magazine.

“We thought it would be special to give her something with a little meaning behind it,” Jacobi explained in a post addressed to Mattel. “What a bummer you don’t make one with two grooms.” So they bought a Barbie wedding set and an extra Ken doll to make a package with two grooms and two flower girls.

The post got the company’s attention, with a spokesperson confirming to Good Morning America that the company has invited the men to a meeting to discuss their pitch.

“Mattel has been wonderful and we are meeting with the head of Barbie design, their design team and marketing – either next Friday or the first week of January,” Jacobi told GMA. “Just sorting out travel details and schedules.”

From cartoons to elementary schools to public libraries, there are numerous ongoing controversies about pro-LGBT imagery and messages being introduced to children without their parents’ knowledge or consent. But the couple argues that homosexuality is so common today that toymakers shouldn’t be reluctant to expose young children to it.

“It's going to come up in your family no matter what,” Caprio claimed. “As more same-sex couples are having kids, your kids are going to have kids in a class that have gay parents.” Jacobi declared that “love is love and it’s that simple.”

“Lefty types seem to have an obsession with molding the kiddos to do their bidding. It’s kind of disturbing, really,” Corey Stallings lamented at Louder with Crowder, also taking aim at the couple’s notion of making a birthday present for the niece about them.

“Way to make the gift all about yourself, chief. Maybe for Christmas I’ll follow suit and give everyone a stocking full of guitar strings, handgun ammo, and beef jerky,” Stallings wrote. “You know, things I like. I’ll top them all off with a picture of myself.”

If Mattel ultimately decides to produce same-sex “wedding” Barbies, it wouldn’t be the iconic doll line’s first foray into pro-LGBT messaging. Last year, one of Mattel’s official Barbie Instagram account posted a picture of a Barbie doll that was “proud to wear” a “Love Wins” t-shirt, bearing the slogan used since 2015 to celebrate the Supreme Court forcing all 50 states to recognize same-sex “marriages.”