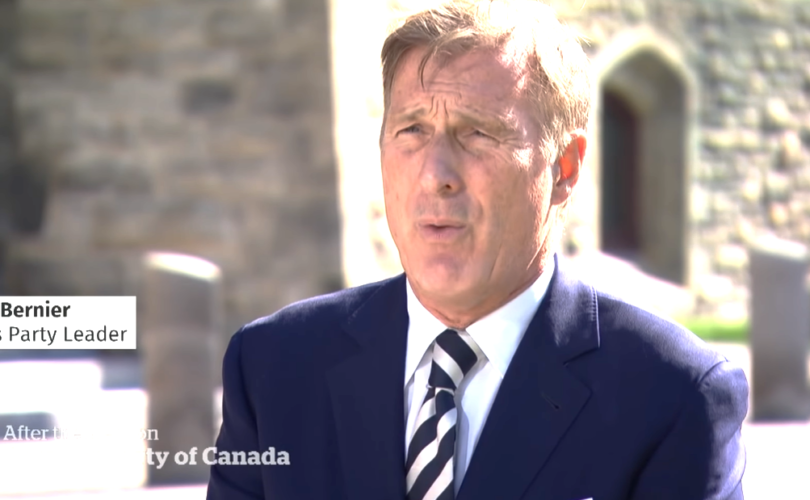 (LifeSiteNews) – Maxime Bernier, the head of the People’s Party of Canada (PPC), said those pushing euthanasia on the vulnerable should be held “criminally responsible” for their actions.

“Are we getting to a point where we’re pushing people to choose euthanasia because our dysfunctional health care system doesn’t have the resources to treat them,” Bernier wrote in a recent blog post.

“Medical Assistance in Dying (MAiD) should NEVER be suggested or pushed on patients, and we should change the law if necessary to hold those who do it criminally responsible.”

In the blog post, Bernier noted that Canada’s “dysfunctional health care system” needs to be reformed so that “everyone gets the care they need,” instead of pushing death as the only option for patients.

Canada’s ever-softening rules surrounding euthanasia — or the lethal injection of sick patients — was just recently brought to the spotlight in a disturbing way. Last week, news broke that a Canadian soldier suffering from PTSD was told he should consider assisted suicide as an option.

Bernier took issue with the news of a soldier being offered assisted suicide as a way out.

“It’s horrifying to see how quickly MAiD went from being a very restricted, difficult-to-get procedure to limit the suffering of people in end-of-life situations, to now being pushed on patients with chronic conditions or mental health issues,” Bernier noted.

“It’s no wonder there are more and more such stories since Canada now has the world’s most permissive euthanasia legislation.”

Bernier then warned that a soon-to-be-released parliamentary report is expected to recommend “that even minors deemed ‘mature’ enough to make such a decision should be eligible” for MAiD.

“I was touring Saskatchewan yesterday. I was shocked to see that MAiD is now being casually offered as an option among others when you call the 8-1-1 Health Line in that province,” Bernier said.

Last week, Bernier tweeted a video of a call to Saskatchewan’s 811 helplines, where it can be heard “press 5 if you wish to leave a message for a medical assistance in dying program.”

Alex Schadenberg of the Euthanasia Prevention Coalition recently noted how assisted-suicide deaths in Canada have jumped 32 percent from last year.

The new law took away “safeguards” in place with Canada’s euthanasia legislation, including the prerequisite that the person who is looking to take his or her own life with assistance be terminally ill, and able to provide their consent at the time of death.

Also, Bill C-7 took away the requirement that two witnesses be present to demonstrate that the person who is seeking to kill himself indeed wants to “die” with medical aid.

Euthanasia was legalized in Canada by the Liberals under Prime Minister Justin Trudeau in 2016 with Bill C-14.

Bernier is not the only prominent Canadian politician sounding the alarm over the nation’s ever-liberalizing assisted suicide laws.

She promised if elected party leader and then Prime Minister in the next election she would “repeal and replace” the regulations.

Recently, the pro-life Delta Hospice Society released a new promotional video emphasizing the importance of protecting oneself against attempts to have their life “terminated unnaturally,”  hoping that the short film will help spread the message of protecting life until one’s natural death.

Angelina Ireland, president of the Delta Hospice Society, told LifeSiteNews that its video “is an attempt to get our message out to a wide audience.”

“Medical Assistance in Dying (MAiD) no longer targets those close to death. It has spread its shadow across our nation. It targets the elderly, infirm, poor, disabled, mentally ill, vulnerable, and weak. Who will be its next targets, Christians, conservatives, or the ‘unvaxxed or free thinkers?’” Ireland said.

“It is time to protect ourselves and be proactive.”

The Delta Hospice Society DNE is a legal document to protect people against attempts to have their lives “terminated unnaturally” through the lethal injection of sick patients.

In recent weeks, the Canadian federal government of Trudeau said they would be expanding the nation’s assisted-suicide law starting in 2023 to include those with mental illness.