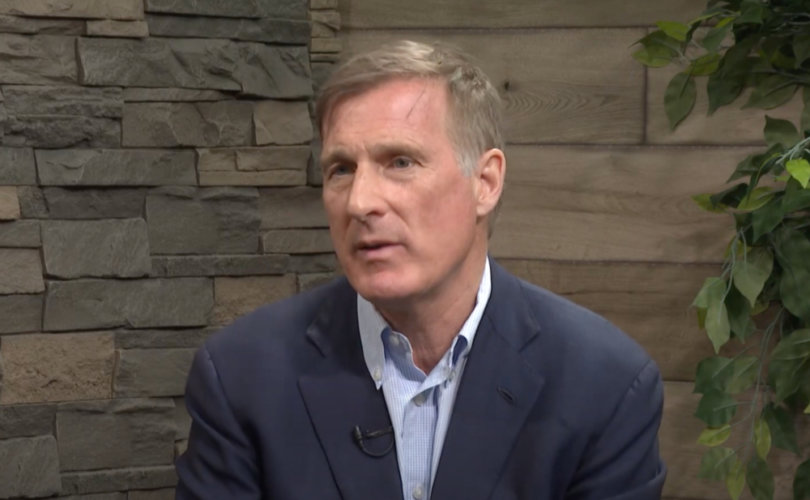 Maxime Bernier during a May 2022 interviewYouTube screenshot

(LifeSiteNews) – Maxime Bernier, the outspoken leader of the People’s Party of Canada, said Canadians should not forget how the COVID jabs were not as effective as promised by the government and how injection mandates resulted in discrimination against the vaccine free.

“Time to remind everyone that the ‘vaccine’ never prevented the transmission of the virus,” Bernier tweeted Friday.

Bernier then spared no words in blasting the “tyrannical governments” in Canada for going after those who chose not to get the jabs with draconian COVID mandates.

“Passports, travel restrictions, layoffs of unvaxxed workers, and other authoritarian covid measures were just a power trip on the part of our tyrannical governments,” he wrote.

The COVID shots were and still are promoted heavily by all levels of government in Canada as necessary to deal with COVID despite the virus having spread to virtually every corner of the country.

— Article continues below Petition —
PETITION: Demand the Conservative Party apologize for not resisting Trudeau's COVID regime
Show Petition Text
4414 have signed the petition.
Let's get to 5000!
Thank you for signing this petition!
Add your signature:
Show Petition Text

Chief Public Health Officer of Canada Theresa Tam said last Friday that Canadians should get their sixth booster shot to deal with a surge of COVID.

However, mounting evidence shows that the mRNA-based jabs approved for use in Canada and the U.S. do not stop the spread of the virus.

There have been countless reports of many high-profile current and former world leaders, including Canadian Prime Minister Justin Trudeau, who have had COVID multiple times despite being boosted.

At a recent hearing in the European Parliament, a Pfizer executive admitted that the company never tested to see if their mRNA jabs would stop the transmission of the virus.

Also, in 2021, many nations with the highest jab rates also had the largest number of COVID infections and deaths.

As for Bernier, he has been the only political leader to consistently speak out against radical gender theory being promoted in Canada, COVID mandates, and the liberalization of the nation’s euthanasia laws.

He chose not to get the COVID jabs and throughout the COVID crisis called out government overreach.

Bernier was also a strong supporter of the Freedom Convoy, which at this time last year saw thousands of Canadians descend upon Ottawa to call for an end to all COVID mandates.

In September 2022, Bernier thanked all Canadian “freedom fighters” who protested against COVID mandates of all kinds after a federal travel jab mandate for air travel was dropped.

Bernier, along with the former premier of Newfoundland Brian Peckford, are currently fighting COVID travel mandates with the help of the Justice Centre for Constitutional Freedoms in federal court.

Bernier and Peckford’s case has gone to an appeal after a judge last October said the case was “moot” as the mandates had been lifted.

As for the COVID shots, they come with many negative health side effects, as government officials were forced to admit.

Dr. Peter McCullough has said that the COVID jabs have caused a wave of “vaccine-induced myocarditis.”

LifeSiteNews reported last week that a new experimental “adenoviral-vectored” trial COVID vaccine, which can be inhaled rather than injected and was in part developed with abortion-tainted cell lines, will soon enter phase two of human trials in Canada.

LifeSiteNews also reported last week on the Canadian COVID Care Alliance (CCCA), which released a video series highlighting stories of those harmed by the experimental