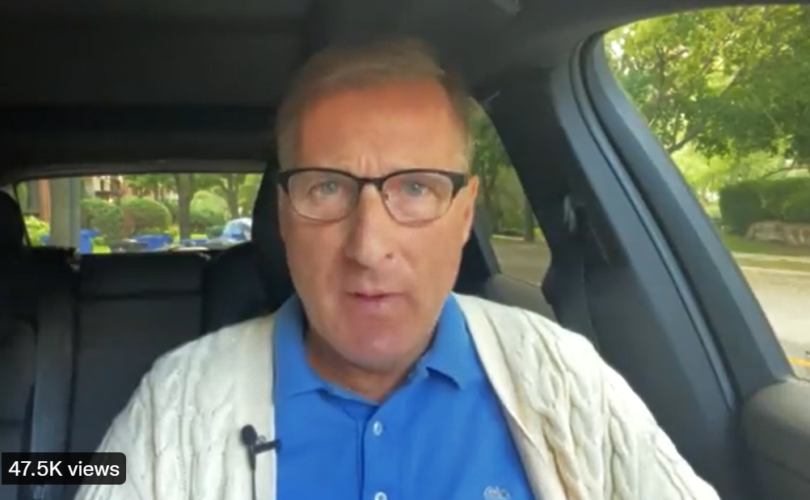 (LifeSiteNews) – Maxime Bernier, the leader of the People’s Party of Canada (PPC), thanked  Canadian “freedom fighters” who helped pressure the federal government to “end” all COVID travel mandates. However, he also said the fight is not over, as those who lost their jobs due to COVID vaccine mandates should be compensated.

“That’s good news, and I want to thank every Canadian who decided to do that fight for our freedoms.”

Bernier said that the battle is not over and they must “continue to fight because some of our fellow Canadians lost their job because of their personal medical decision.”

“And every one of them must be able to go back to work. I believe that today it is the case,” Bernier said.

Bernier then said the “most important” thing is that all of those who lost their jobs for choosing to not get the jabs “must receive full compensation for the time that they were not working during that pandemic because of their medical decision.”

“Because they decided not to take the shots” Bernier said.

On Monday, the Canadian federal government announced an end to remaining COVID mandates in Canada regarding travel.

Starting October 1, masks on planes and trains will be optional, there will be no more COVID testing, and vaccine-free Canadians will no longer be subject to a mandatory quarantine.

The drop in mandates comes after outrage and protests that included the Freedom Convoy and even pressure from the industry and travel groups.

Bernier said that “we have the majority on our side” in opposition to the COVID mandates.

“And these are establishment politicians in Ottawa, the Trudeau government, they are doing politics based on survey and polling and focus group, and they know that the majority is saying right now, enough is enough, and that’s why they are ending these draconian measures,” Bernier said.

The first crack in the Trudeau government’s insistence on keeping travel vaccine mandates came in June after the government announced a “suspension” of the COVID jab mandate for travelers and federally regulated transportation workers.

Canada’s much-detested ArriveCAN travel app will be also made optional, and a mandate foreigners must be jabbed to enter Canada is expected to be gone.

Last fall, Prime Minister Justin Trudeau announced a mandate that anyone traveling by air, rail or sea domestically or internationally would need the COVID shots.

Currently, Bernier, former Newfoundland Premier Brian Peckford, and five others are in federal court challenging Trudeau’s travel vaccine mandates with the help of the Justice Centre for Constitutional Freedoms (JCCF).

Last week, a federal judge said she will reserve her decision on whether to allow legal proceedings to go ahead against the Canadian government’s travel vaccine mandates.