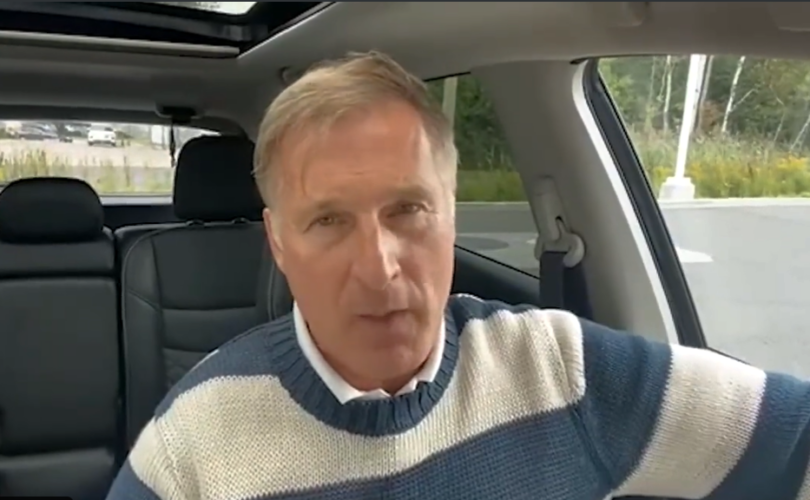 SASKATOON, Saskatchewan (LifeSiteNews) – Maxime Bernier, the head of the People’s Party of Canada (PPC), is in a Saskatchewan court battling a COVID ticket given to him for attending a freedom rally and has vowed to fight for the right to freedom of assembly to ensure Canadians’ free speech is protected.

The Justice Centre for Constitutional Freedoms (JCCF) is representing Bernier and 22 others who were charged in May 2021 for attending a pro-freedom, anti-lockdown rally in Saskatoon.

Bernier noted on Twitter yesterday that with the help of the JCCF they will be arguing that the defendants’ constitutional rights, under Section 2C of the Charter of Rights and Freedoms, were violated.

“In a democratic country, you must have the right to protest against draconian measures. And that’s what we did. And that’s why I’m very proud of these 50 extraordinary Canadians that did that with me,” Bernier said.

“In a democratic country, you must be able to protest against a tyrannical government. That’s what we did. And that’s important also to do that fight in the court, because we want to have a legal precedent.”

Section 2C of Canada’s charter reads that “Everyone has the following fundamental freedoms,” which include “freedom of peaceful assembly.”

Speaking to reporters on Monday from a Saskatoon courthouse, Bernier said, “You know, having the right to be out there and be at a political protest in a democratic country. We will win that case.”

The JCCF in a press release Monday noted that the “Saskatoon Police Service aggressively targeted the protesters by posting images of many of them online, and subsequently issuing dozens of summons tickets, each with a $2,800 fine.”

The JCCF said that Bernier and dozens of others had attended the May 9 rally, which was “a peaceful outdoor protest against government violations of Canadians’ constitutional rights and freedoms.”

Bernier, while speaking to reporters on Monday, said he was “was proud to be there” at the rally and that he is “proud of these people (the other protesters) also.”

Bernier then blasted the fact police resources were wasted on targeting the freedom rally goers, saying, “all the resources they put into a trial for two weeks. I believe that the police here in Saskatchewan must go after the real criminals.”

He noted how the freedom rally attendees are “heroes” as they “fight for our rights.”

The trial will run for a two-week period.

Lawyer: There is no ‘legal’ justification for restrictions on outdoor protests

JCCF lawyer Marty Moore said there is no “legal or medical justification for the strict numerical restrictions imposed on outdoor protests in Saskatchewan.”

“Yet, an incredible amount of public resources, including prosecution and court time, has been committed to prosecuting protestors,” he added.

“The targeting of these protestors is not on the basis that their protests were a health risk, but rather because they expressed opposition to the government’s unjustified restrictions on Canadians’ constitutional rights and freedoms.”

Saskatchewan had in place in May 2021 rules that limited outdoor events, including protests, to 10 people.

Moore noted, however, that not “a single transmission of Covid has been associated with an outdoor protest in Saskatchewan, and yet the government continues to go after protesters for exercising their constitutionally-protected freedoms of expression and peaceful assembly.”

— Article continues below Petition —
PETITION: Demand the Conservative Party apologize for not resisting Trudeau's COVID regime
Show Petition Text
2559 have signed the petition.
Let's get to 4000!
Thank you for signing this petition!
Add your signature:
Show Petition Text

Bernier chose not to get the COVID jabs and throughout the entire COVID crisis called out government overreach.

He also has continuously blasted the Conservative Party of Canada, including new leader Pierre Poilievre, for only speaking out against COVID mandates when it became acceptable to do so.

Bernier once served as a cabinet minister under former conservative Prime Minister Stephen Harper before leaving to create the People’s Party. He has been vocal on many issues affecting family and life, including “radical gender ideology,” as well as pushing euthanasia on the vulnerable.

He is currently challenging Canada’s injection travel mandate in court with the help of the JCCF.

In Canada, data shows that uptake for COVID boosters is rather low and declining, with only 49.57 percent of the population having had a third jab. Only 12.41 percent of Canadians have chosen to get more than one booster shot.