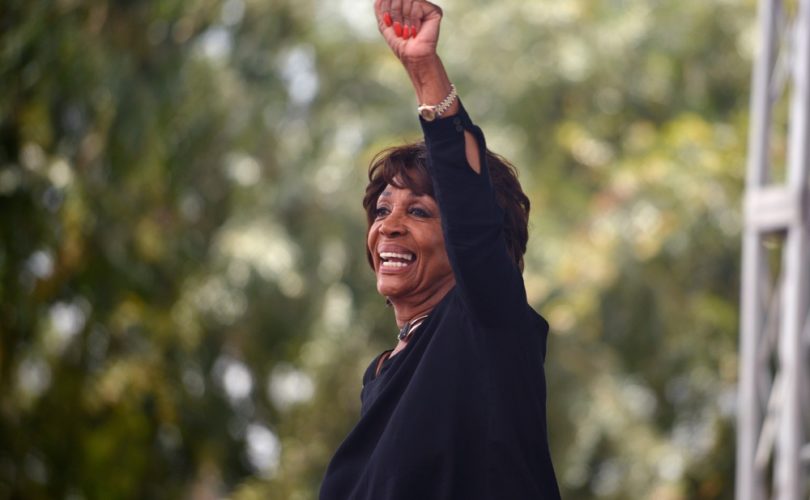 Chauvin is standing trial for his alleged role in the 2020 death of Minneapolis man George Floyd during an arrest, which sparked a wave of BLM violence and protests across the United States. His defense argues that he used appropriate force for the situation, and that Floyd’s death was actually due to a lethal quantity of fentanyl in his system.

“Oh no, not manslaughter. This is guilty for murder. I don’t know whether it’s in the first degree, but as far as I’m concerned it’s in the first degree,” Waters told a group of Black Lives Matter protesters in Brooklyn Center, Minnesota this weekend, the Media Research Center reports (Chauvin has been charged with second-degree unintentional murder, third-degree murder, and second-degree manslaughter; prosecutors did not seek a first-degree murder charge).

If he isn’t convicted by the jury, the California lawmaker continued, “We’ve got to stay on the street and we’ve got to get more active, and get more confrontational. They’ve got to know that we mean business.”

Numerous Republicans denounced Waters for, in Sen. Ted Cruz’s words, “actively encouraging riots & violence,” but her comments went largely overlooked in the press, despite months of insistence that Trump “incited” the January 6 riot at the U.S. Capitol by calling on supporters to “peacefully and patriotically make your voices heard” in protest of Congress certifying the 2020 election results.

They want to tear us apart.

“'We gotta stay on the street,' Waters was recorded saying, adding that protesters needed 'to get more confrontational' & they should ignore the curfew in place.” https://t.co/PWW7YNDbKR

Very soon I'll be introducing a resolution to expel @RepMaxineWaters from Congress for her continual incitement of violence on innocent American people.

Rep Waters is a danger to our society.

Why is Maxine Waters traveling to a different state trying to incite a riot? What good can come from this? https://t.co/nXzV0trmN3

The Radical Left don’t care if your towns are burning, if there’s violence in your streets, or if the police are too defunded to defend their communities.

As long as the Left appeases their anti-America base, their job is done.https://t.co/bmBJEsrCdn

Why is a sitting member of Congress encouraging protesters to get “confrontational?” https://t.co/Biwg69iYG1

The Hill reports that Waters responded to her critics Monday with defiance, insisting “I am nonviolent” and claiming that her Republican critics were “send[ing] a message to all of the white supremacists, the KKK, the Oath Keepers, the [Proud] Boys and all of that, how this is a time for [Republicans] to raise money on [Democrats'] backs.”

Waters is no stranger to inflammatory remarks. In 2018, she told a crowd: “If you see anybody from [Trump’s] Cabinet in a restaurant, in a department store, at a gasoline station, you get out and you create a crowd and you push back on them, and you tell them they’re not welcome anymore, anywhere.”