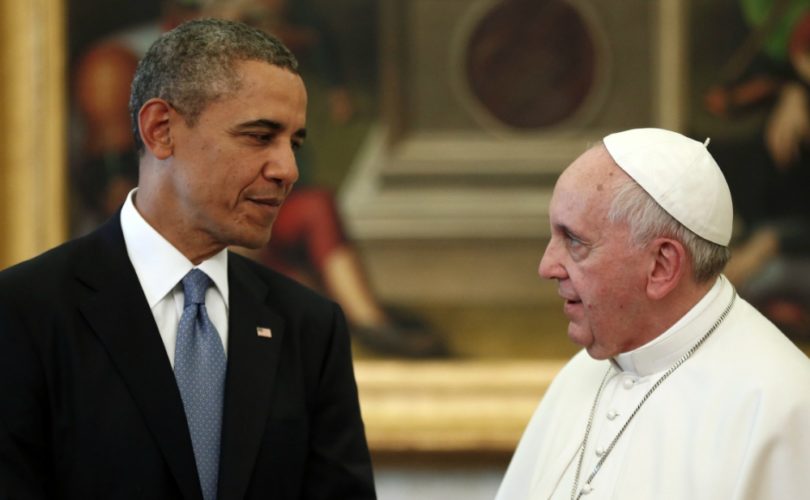 Pope Francis became the first pontiff ever to address the U.S. Congress during his visit last week – a speaking engagement retiring House Speaker John Boehner had tried to arrange for 20 years.

During the speech the pontiff had urged congressmen to “protect and defend human life at every stage of its development.”

The previous day, Pope Francis warned Congress of a “temptation which we must especially guard against: the simplistic reductionism which sees only good or evil; or, if you will, the righteous and sinners.”

The call echoed similar words the president made on the campus of Notre Dame in 2009, when he said both sides of the abortion debate must speak with “open hearts, open minds, fair-minded words.” But pro-life advocates say the president has demonized them with an endless stream of federal actions prosecuting sidewalk counselors, gathering intelligence on the pro-life movement, and branding pro-life Americans as potential domestic terrorists in numerous federal reports.

Obama, who had previously called resigning House Speaker John Boehner a “patriot,” referred to him on Friday as “a good man and a reasonable man, and he’s going to be around for a while. And I hope that we can get things done before he steps down.”

Boehner's more conservative colleagues, whose pressure led him to resign effective October 30, say funding Planned Parenthood is a non-starter for them.

Rep. Timothy Huelskamp, R-KS, told LifeSiteNews that John Boehner has “got five weeks left to do the right thing,” so he's got “nothing to lose by fighting to take away the money for people who engage in baby trafficking.”