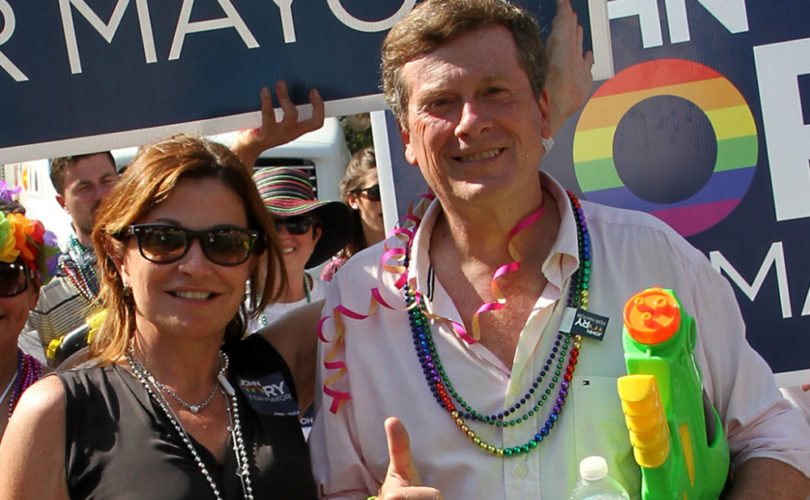 John Tory attends Toronto's WorldPride parade in 2014 while he was campaigning for mayor.

TORONTO, June 22, 2015 (LifeSiteNews) — Toronto’s new mayor is not only praising the city’s annual gay Pride parade, but he saying it is the “essence” of what makes the city “great.”

After five years in which former Mayor Rob Ford avoided the event on principle, current Mayor John Tory will not only be attending the event, but is encouraging all Torontonians to “come to the parade and be a visible part of it.”

“[Pride] is one of the biggest celebrations in our community, period,” he said to the Toronto Star on Sunday. “We are celebrating what I think is at the essence of what makes Toronto a great city: how we live together.”

In a YouTube video posted last week announcing his participation in the city’s Pride events, the mayor went as far as calling next Sunday’s Pride parade “the best time you can have in Toronto with your clothes on.”

Of course, not everyone has clothes on. Though promoted as “family friendly,” previous Pride parades have included entirely naked men displaying full frontal male anatomy. There have been displays of mock sex acts, sexual bondage, and sadomasochism.

“In-your-face sexuality is the point of the damn thing,” wrote Lauren Strapagiel, news editor at Canada.com, in a 2014 piece titled “The fuss about nudity at Toronto Pride is manufactured nonsense.”

“Ultimately, there are worse things than seeing a penis flopping down Yonge Street,” she wrote.

Matt Wojciechowski of Campaign Life Coalition said it’s “very troubling” to have the city’s mayor claim that an event containing  “obscene nudity and men performing sex acts on each other in front of passersby, including children, is a celebration of the ‘essence’ of what makes this city great.”

Noting the physical dangers and health risks associated with homosexual behaviors, Wojciechowski said a mayor should not “promote more of this behaviour.”

Last year LifeSiteNews released a photo that went viral of a young girl covering her eyes as nude men marched past her in the 2011 Toronto Pride parade.

Danny Glenwright, managing editor at the homosexual news service Xtra, wrote in a piece last year titled “Let's get naked this Pride” that those who have a problem with what he called “our wanton sexuality and hedonism” at the parade can “stay home.”

Canadian law prohibits public nudity. Section 174 of the Criminal Code states that a person who is “so clad as to offend against public decency or order” is “guilty of an offence punishable on summary conviction.” Toronto’s police force, which marches in the Pride parade, has decided to not enforce the law at this event.