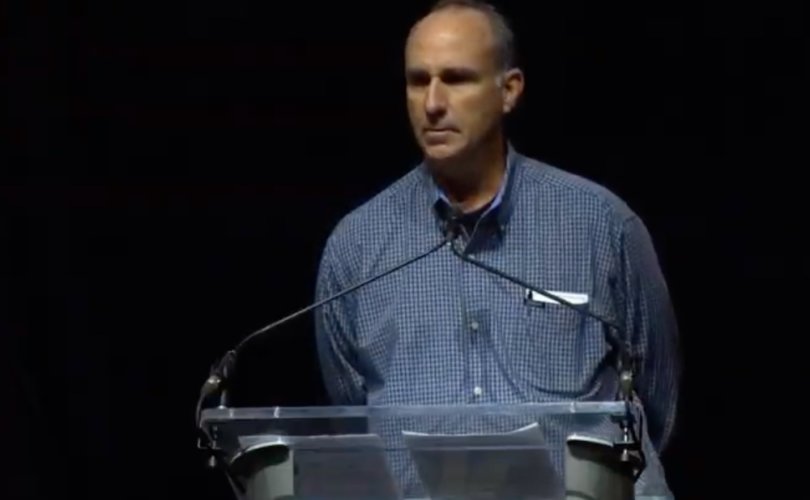 James Grein speaking in public for the first time at the 'Silence Stops Now' rally on November 13, 2018.

September 3, 2019 (LifeSiteNews) – A man who says as a child he was sexually abused repeatedly by former Cardinal Theodore McCarrick has responded to the ex-prelate’s recent surprise denial of the many accusations that have been lodged against him.

Slate magazine tracked down the defrocked McCarrick at a Capuchin friary in off-the-beaten-path Victoria, Kansas. The friary is located next door to elementary and high schools.

“I’m not as bad as they paint me,” said the former prelate who broke a year of silence. “I do not believe that I did the things that they accuse me of.”

James Grein, whose credible allegations about being sexually abused by McCarrick at age 11 led to McCarrick’s eventual defrocking, responded to the interview via social media: “I am hoping McCarrick is not abusing children and adults in Kansas. His denials are still the same as he told me –  ‘who will ever believe you . . . ?’”

“It’s time for Pope Francis to provide a comment which would clarify how Cardinal McCarrick and other high-ranking officials within the Catholic Church were allowed to sexually abuse innocent children over the course of decades in a wholesale manner,” declared the attorney.

“Even Fr. John Geoghan when he was in a retirement home was sexually abusing children,” observed Garabedian.

Over the years, Garabedian has famously won settlements for scores of victims of clerical sexual abuse, including those of notorious Fr. John Geoghan, who was accused by more than 130 boys.