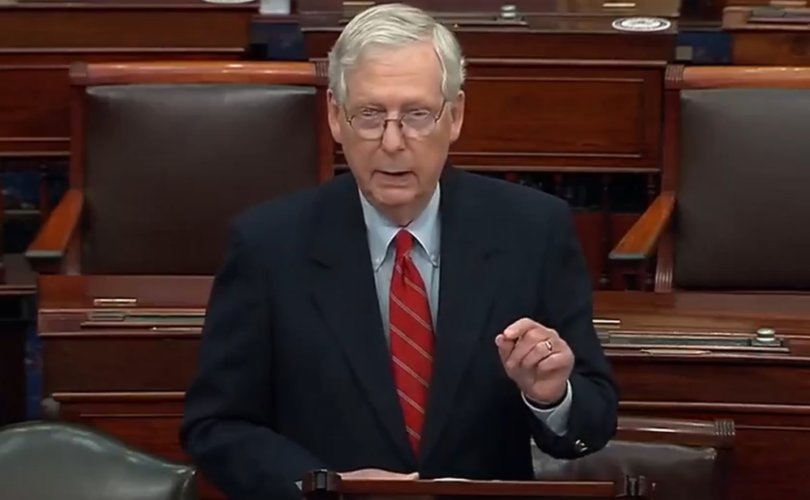 Original Story: WASHINGTON, D.C. (LifeSiteNews) – The U.S. Senate reached an agreement this week on a $1.7 trillion omnibus bill to fund the federal government, in what many conservatives are calling a capitulation by Senate Minority Leader Mitch McConnell and other Republican leaders.

Just the News reports that the deal was reached after Democrat Senate Majority Leader Chuck Schumer allowed an amendment to extend Title 42, a Trump-era public health authority facilitating the quick deportation of illegal immigrants, to be voted on with just 51 votes rather than the 60 typically needed to break a filibuster.

McConnell claimed that the omnibus, despite having to meet the approval of Democrats, achieved “essentially all of our priorities,” including assistance for Ukraine’s defense against invasion by Russian dictator Vladimir Putin (an issue that has divided conservatives). Specifically, he said that the deal provides the U.S. military “the funding increase that it needs, outpacing inflation” while “non-defense, non-veterans spending will come in below the rate of inflation, for a real-dollar cut.”

McConnell: "I'm pretty proud of the fact that with a Democratic president, Democratic House, and Democratic Senate, we were able to achieve through this Omnibus spending bill essentially all of our priorities." pic.twitter.com/RuVcsvNX0B

McConnell: "Providing assistance for Ukrainians to defeat the Russians is the number one priority for the United States right now according to most Republicans. That's how we see the challenges confronting the country at the moment." pic.twitter.com/NPmzWRzoz1

That sunny assessment is contrary to many of the details highlighted by conservatives such as Rep. Dan Bishop (R-NC), who identified numerous examples of pork for lawmakers’ constituencies as well as numerous left-wing priorities, including $286 million for the Title X family planning program, which in turn will fund abortion giant Planned Parenthood. It also funds left-wing environmental, gender, and immigration priorities, and increases funding for a vaccine injury trust fund.

$477k for "antiracist" training from the Equity Institute

$3 million for the LGBTQ+ museum in NYC

$1.2 million in "services for DACA recipients"

$4.1 million in various career programs for one of the richest counties in the US (Fairfax) pic.twitter.com/pPTxuTwGfQ

$65 million in two programs for Senator Leahy, and a federal building named for Nancy Pelosi.

It also authorizes "sums as may be necessary" for vaccine injury/death claims. pic.twitter.com/HtoUnniRxt

$535 million for the Corporation for Public Broadcasting, which indirectly funds NPR via grants. pic.twitter.com/PohWeVWxQM

“Even worse, the omnibus runs through fiscal year 2023. The American people just gave Republicans a House majority of 222 versus Nancy Pelosi’s 218. But the omnibus snatches the GOP’s power of the purse until Oct. 1,” columnist Deroy Murdock writes. “McConnell is helping Democrats castrate House Republicans for 10 months. If they took control on, say, Aug. 1, waiting two months might be tolerable. But they take the gavel 13 days from this writing.”

Further, the omnibus clocks in at 4,115 pages. Yet Senate leaders want to finish voting on amendments and final passage by Friday, despite the impossibility of reviewing and debating all its contents in that time frame.

While Democrats retained control of the Senate in last month’s midterm elections, the fact that Republicans narrowly won the House of Representatives led many conservatives to urge GOP leaders to delay any long-term spending decisions until the new House majority takes effect in January, by passing a short-term government funding bill then leaving long-term decisions to a divided Congress in which Republicans would have more influence.

That McConnell did not take that approach comes as little surprise, but has angered conservatives and reinforced long-running discontent with his leadership and priorities (none of which was enough to derail his reelection as party Senate leader, thanks in large part to the lack of a viable alternative).

In the House, current Republican minority leader and incoming Speaker Kevin McCarthy (who faces his own discontent from conservatives but appears interested in at least somewhat placating them) is reportedly supporting conservative members’ threats to “thwart” any future legislative priorities of any Senate counterparts who vote for the omnibus.

“Put aside the absurd spending and empowerment of Biden bureaucrats to continue their intentional abuse of power and dereliction of duty. It is the willingness of Senate Republicans to abandon for now the one leverage point we have – the power of the purse – to stop Biden’s purposeful refusal to secure and defend our borders that is most offensive,” reads a letter signed by members of the House Freedom Caucus.

“Kill this terrible bill or there is no point in pretending we are a united party, and we must prepare for a new political reality,” the letter warned.