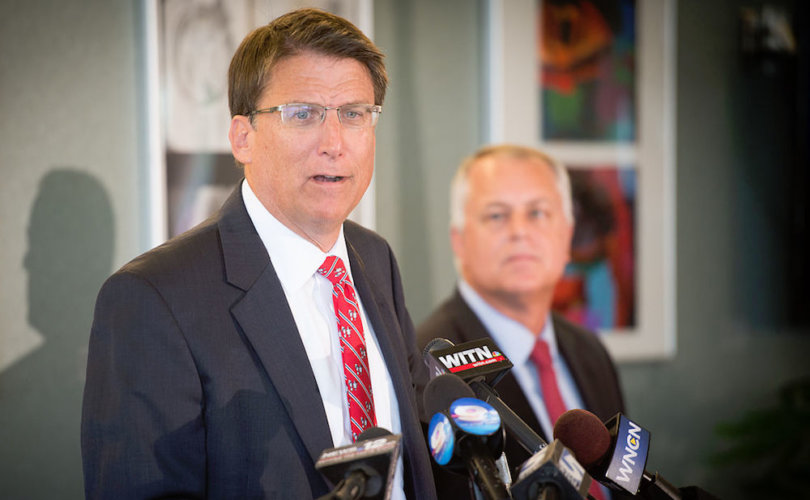 NORTH CAROLINA, December 5, 2016 (LifeSiteNews) – Incumbent Republican Governor Pat McCrory gracefully conceded defeat on Monday, but the  controversial “bathroom bill” that might have cost him the election should withstand any efforts to repeal it by Democratic winner Roy Cooper.

McCrory withheld his concession until now because of voting irregularities he said remain to be explained, but because Cooper’s lead was more than the 10,000 votes needed to withstand an automatic recount, the outgoing governor told voters, “I believe the majority of our citizens in North Carolina have spoken. We should do everything we can to support the 75th governor of North Carolina, Roy Cooper.”

McCrory campaigned on the strength of strong economic performance, boasting of creating 300,000 new jobs, paying off millions of dollars in debt, and helping  the state grow the country’s second strongest economy, as well as showing strong leadership during Hurricane Matthew.

But he attracted strong opposition from pro-LGBT corporations and governors when he ratified HB2, a law that stops “trans” or “gender fluid” persons from using washrooms other than those appropriate to their sex at birth.

The social conservative group NC Values blamed the opposition for McCrory’s defeat. Meanwhile, in the state legislature, Republicans returned to both chambers with veto-proof super majorities.

“Governor McCrory’s defeat was orchestrated by radical forces outside North Carolina that poured millions of dollars into the state to ‘eviscerate’ our state’s leaders and fundamentally change our state’s values,” according to NC Values’ statement.

“It was an organized and well-funded strategy,” the statement went on, “supported by left-wing, out-of-state donors like George Soros, Planned Parenthood, and the Human Rights Campaign” who “outspent the Governor two to one.”

“Not only has Governor McCrory created a booming economy in North Carolina where businesses and families thrive,” the statement continued, “but he has stood strong to protect the privacy, dignity, and safety of our citizens.”

Cooper vowed to repeal HB2, but he lacks the strength in the legislature to do so. Moreover, Republicans have more that 60 percent of the seats in both houses, enough to override his veto if they wish to pass more controversial social conservative measures.