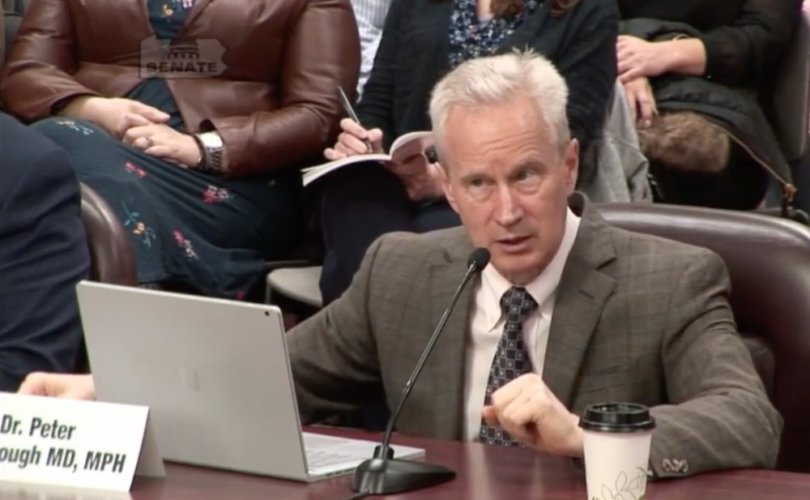 HARRISBURG, Pennsylvania (LifeSiteNews) — Prominent internist and cardiologist Dr. Peter McCullough, who has frequently warned against mass-vaccination against COVID-19, told Pennsylvania lawmakers during a March 4 hearing that up to 95% of American COVID deaths could have been prevented with early treatment.

“As we sit here today, my estimates are 95% of Americans who have died of COVID-19 — and we’re approaching nearly a million of these poor souls — and tens of millions of hospitalizations, could have been avoided with a comprehensive early treatment approach,” said McCullough, who testified as an expert witness in the hearing, which was hosted by Pennsylvania Republican state Sen. Doug Mastriano.

Attorney Thomas Renz, chiropractor and medical researcher Dr. Bryan Ardis, and philanthropist Steve Kirsch also testified during the hearing, held to enable medical experts and lawmakers “to openly discuss the four pillars of pandemic response, the brokenness in medicine today, and the way forward to unite Pennsylvania under the banner of Medical Freedom,” according to a press release put out by Sen. Mastriano’s office.

McCullough, who is distinguished as the most published person in history in his field and is an editor of two major medical journals, went on to argue strenuously against injecting children with the experimental COVID-19 shots.

URGENT PUBLIC NEWS: U.S. Senate expert witness testimony Dr. Peter McCullough states that 95% of American deaths could have been avoided. Autopsy confirms two teenage boys die on days 3 and 4 after the shot, the parents are horrified. This push is resulting in deaths of children. pic.twitter.com/x49s3IIZR9

RELATED: These 6 studies show why children should never be injected with the COVID shot

“It is clear, based on publications of representative data, that the risks far outweigh the potential benefits of vaccinating children, and the data are clear,” he said.

McCullough noted that there have been multiple reports of teenagers suffering fatal adverse reactions to the jabs in the past several weeks.

“Autopsies were performed and the conclusion was crystal clear: The vaccines caused the death[s] with massive heart inflammation and evidence of superimposed catecholamine injury on the heart,” McCullough said.

RELATED: ‘All he wanted to do was play hockey’: Grieving dad says Pfizer shot killed his 17-year old son

McCullough noted that additional fatal reports have come in from researchers in South Korea and Washington University in St. Louis.

“It is clear that a vaccine is being pushed, is being encouraged, and [mandated], that in fact results in [the] death[s] of children,” he argued.

“It’s my viewpoint, as a physician and as a public citizen, that all vaccine mandates should immediately be dropped, and all current vaccines be pulled from the market and undergo a very intensive review on safety and efficacy, and figure out where the vaccine program has gone wrong,” McCullough said.

McCullough’s comments come as nearly 1.2 million adverse events connected to the COVID jabs have been reported to the U.S. government’s Vaccine Adverse Event Reporting System (VAERS) as of March 18, including 26,059 deaths, 143,554 hospitalizations, and 37,133 cases of myocarditis (heart inflammation).