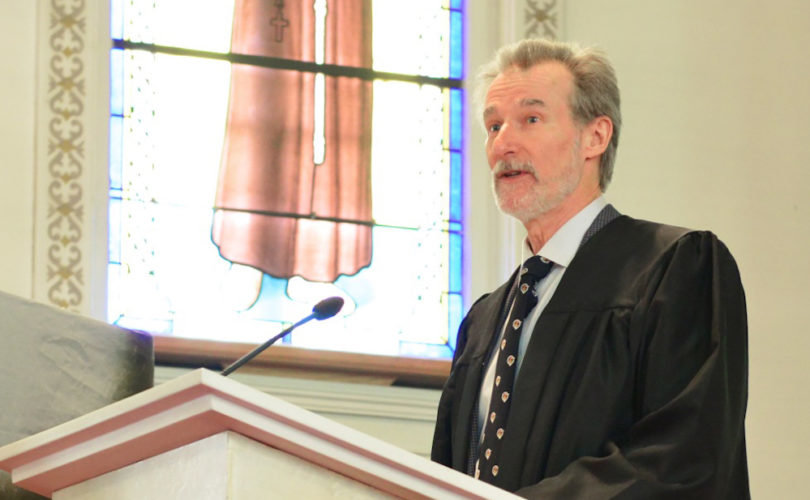 Courtesy of Our Lady Seat of Wisdom

MONTREAL, March 7, 2016 (LifeSiteNews) — The Catholic Church must resist the coming euthanasia regime with a clear “No!” that has “hard political and social and legal consequences,” theologian and political commentator Douglas Farrow told Canada’s bishops in a recent open letter.

“Resistance that is not whole-hearted and unrelenting is doomed to failure, failure of a kind that will eventually destroy the witness of the Church and, with it, society’s last and best hope,” warned the professor of Christian Thought at McGill University.

“In other words,” wrote Farrow in a February 29 letter, which was published Thursday on First Things, “this is a moment of decision for the Church, as well as for the country, and of impending hardship for faithful Christians and people of firm conscience.”

“Without an effectual No, paid for in full, there can be no effectual Yes of the gospel.”

That “No!” would include regarding a euthanasia law as having no morally binding force, rallying Catholics to civil disobedience, clearly declaring that anyone involved in “formal cooperation” with euthanasia and assisted suicide is automatically excommunicated, and refusing Communion to politicians who vote for euthanasia.

On February 25, the special parliamentary committee tabled 21 recommendations for a new law to regulate euthanasia and assisted suicide, which will be legalized June 6 when the Supreme Court’s February 2015 Carter decision striking down the current law as unconstitutional comes into effect.

“Our country is suffering from grave moral confusion and from a deep spiritual malaise, bordering on the great sin of despair. Who embraces death in such a fashion that has not begun to succumb to despair?” Farrow wrote. “In Carter our highest court took the side of fear and despair.”

While the Liberal-dominated committee’s report has been denounced as proposing an extreme euthanasia regime far beyond the scope of the Carter ruling, Farrow pointed out that regardless of what recommendations are implemented in the coming legislation, “we must be under no illusion…as to the gravity of the situation.”

“The culture of death is to speak now with the voice of the state, and to be backed by the state’s authority. It is to expand by state power,” he stated.

“Determined, unwavering opposition, in faithfulness both to right reason and to the gospel of life, is the Church’s only possible course.”

Some might question how Christians can “address the state on moral matters” in which the state claims to be neutral, noted Farrow, an author of several books, including “Desiring a Better Country: Forays into Political Theology” (2015) and “Nation of Bastards: Essays on the End of Marriage” (2007).

But the “clear implication” of a “suicide regime” is that the human person is not accountable to God for his life, nor is the state “accountable to God, whether in its moral deliberations or in its conduct,” he wrote.

“It may even kill with impunity, under conditions prescribed by none but itself.”

So, far from being neutral, the state is “taking a side in the debate about what man is and how far his autonomy extends; hence also about who or what God is, and how far God’s authority extends.”

The state is therefore “adopting and indeed insisting upon an anthropology (and a corresponding politics) with far-reaching theological implications.”

It is “absolutely vital,” wrote Farrow, that lay or clerical Catholic leaders “not be manoeuvred, in the name of political compromise or with a view to limiting harm, into giving even tacit approval to whatever assisted suicide and euthanasia regime comes into being.”

And he urged the bishops to “declare publicly” to all politicians and the entire country “that she will not regard euthanasia legislation…as having the binding force of morally valid law,” and that the bishops would “exercise and encourage civil disobedience in the matter, though that require significant sacrifice.”

Farrow also urged the bishops to clearly state that “formal cooperation with suicide or euthanasia, by analogy with abortion, entails excommunication latae sententiae” and to “inform Catholic officials that anyone who votes to create a euthanasia regime or to liberalize one” should “not present himself for communion and is subject to a just penalty,” even, “if need be” excommunication.

Farrow, who thanked the bishops for their “ strong leadership,” conceded that these “are strong measures, not ordinarily taken.”

But, he added, “nothing weaker will sound the clear note that is needed to rally the faithful and to give pause to our fellow citizens.”

Read the full text of Dr. Farrow’s open letter to the bishops here.