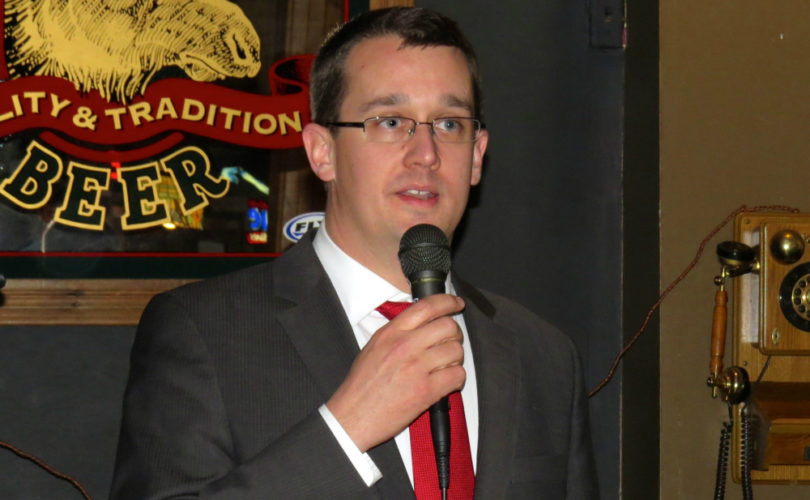 Following the voting on May 3 and May 7, the party will announce its new leader at a May 9 convention. PC Party members can find their voting station at the party’s website here, or call the Brown campaign: 1-844-772-8742.

“I’m concerned that there are a number of people within our party who want to make us more like the Liberals,” the 38-year-old MPP for Lambton-Kent-Middlesex said. “If we adopt Kathleen Wynne’s policies it’s going to be devastating politically for the Conservative Party of Ontario.”

McNaughton, who campaigned with his wife Kate and 20-month-old daughter, admitted quitting the leadership race was hard: “I set out to win.”

But by February 28, knowing that his campaign had signed up 12,000 new members to Brown’s 41,000, McNaughton decided to pull out and endorse Brown to avoid splitting the pro-life, pro-family vote, announcing his decision April 9.

Moreover, he and Brown “shared very similar positions in the leadership campaign, especially on the sex education, and also ripping up the Green Energy Act…so it really was a natural fit for us to work together.”

So far, McNaughton has been the only MPP to speak out in the Ontario legislature against the Wynne Liberals’ controversial sex-ed curriculum, and he had a mild rebuke for fellow Tories: “I’m disappointed that over the last six months as a party we haven’t stood strong enough. … We need to send a message to parents of Ontario that the Conservatives are on your side, we’re not on the side of the teachers’ unions, we’re not on the side of the education industry, we’re on the side of parents and children.”

At the same time, McNaughton expects more Conservatives to come on board, as parental opposition to the radical sex-ed program grows increasingly vocal and persistent.

“I’ve been the leading voice, and a couple colleagues have been talking about it now,” he said, pointing out that as well as Brown’s opposition to the sex-ed curriculum, MPP Jack MacLaren (Carleton-Mississippi Mills) spoke at the April 14 rally at Queen’s Park, which was attended by 5,000 protestors.

“We’re seeing a groundswell of opposition to Kathleen Wynne’s agenda, and I think the majority of parents in Ontario want a political party and politicians who will stand up and say: ‘I will repeal this Liberal agenda.’”

McNaughton related noticing how the Wynne Liberals introduced the sex-ed curriculum “in a very sneaky way, without telling people,” by sending out a press release announcing the curriculum “two days after we elected school board trustees.”

“I caught wind of it, and decided to make this an issue because I think this speaks to the broader issue of what’s the role of government and what’s the role of parents in Ontario,” he told LifeSiteNews. “I don’t think it’s the government’s job or any politician’s job to tell a parent what’s age appropriate for their child. That’s up to moms and dads in Ontario.”

McNaughton said publicly slamming Wynne’s sex-ed curriculum has not been a political liability. “I always knew that as Conservatives, we’ve got to represent every day people in Ontario. And I knew from the backlash we saw in 2010, that this was an issue many people had concerns about.”

The Liberals’ 2010 sex-ed curriculum, virtually identical to the 2015 version and introduced under Premier Dalton McGuinty, was pulled after an outcry from parents.

“There’s no doubt that most people saw me on the front page of the paper when I challenged Kathleen Wynne, and she turned around and called me homophobic,” McNaughton said. The accusation, however, left him unfazed. “I think that was a desperate attempt of Kathleen Wynne to change the channel.”

McNaughton said he was inspired to go into politics when as a boy, he read about his paternal grandfather, a reeve in the small town of Newbury who fought for 20 years to get a local hospital built. “I do feel that sometimes you’re called to do things and I ask myself why at such a young age, when I was in Grade 6, did I want to become an MPP,” he mused, adding, “It was just something that was in my mind at a young age.”

The sometimes roughhouse realities of political life have not forced McNaughton to compromise. “The problem I have with politics and politicians is they go whichever way the wind’s blowing. I just feel you get more respect from people and you have more people behind you, supporting you, when you take a stand and you stick by the position that you’ve taken, you don’t waver and you don’t back down.”

“If more people in politics did that, I think they would gain the respect of voters in Canada,” McNaughton contended.

“I’m going to continue to stand by my convictions,” he said, adding, “I feel that my faith keeps me rock solid. Obviously, like anything, there are challenges day to day, but for me it’s truly about representing the people who sent me to Queen’s Park and I’ll continue to advocate on their behalf.”

As for the PC leadership race, McNaughton has no doubts on that score. “The choice is clear,” he reiterated. “It’s the establishment versus someone who truly is going to reform the PC party and listen to its members, and that is Patrick Brown.”